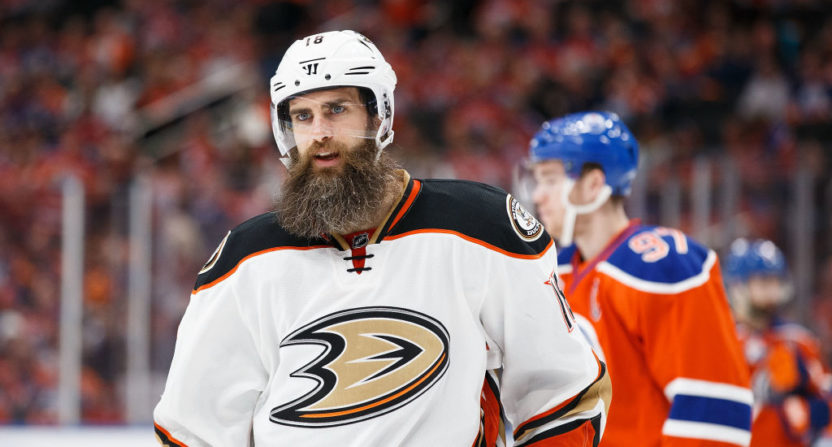 Veteran Anaheim Ducks’ forward Patrick Eaves is facing a tough off-ice battle. The club announced Monday that Eaves is in hospital in Newport Beach following a diagnosis of Guillain-Barré syndrome, a rare (it affects 1 in 100,000 people) and potentially fatal disorder where a patient’s immune system attacks their nervous system. Eaves was in intensive care over the weekend, but stabilized over the weekend, and the club statement says he is expected to make a full recovery. However, that can be a long and difficult process, as the National Institute of Neurological Disorders and Stroke’s fact sheet on the disease mentions:

Guillain-Barré syndrome (GBS) is a disorder in which the body’s immune system attacks part of the peripheral nervous system. The first symptoms of this disorder include varying degrees of weakness or tingling sensations in the legs. In many instances the symmetrical weakness and abnormal sensations spread to the arms and upper body. These symptoms can increase in intensity until certain muscles cannot be used at all and, when severe, the person is almost totally paralyzed. In these cases the disorder is life threatening – potentially interfering with breathing and, at times, with blood pressure or heart rate – and is considered a medical emergency. Such an individual is often put on a ventilator to assist with breathing and is watched closely for problems such as an abnormal heart beat, infections, blood clots, and high or low blood pressure. Most individuals, however, have good recovery from even the most severe cases of Guillain-Barré syndrome, although some continue to have a certain degree of weakness.

…Guillain-Barré syndrome can be a devastating disorder because of its sudden and unexpected onset. In addition, recovery is not necessarily quick. As noted above, patients usually reach the point of greatest weakness or paralysis days or weeks after the first symptoms occur. Symptoms then stabilize at this level for a period of days, weeks, or, sometimes, months. The recovery period may be as little as a few weeks or as long as a few years. About 30 percent of those with Guillain-Barré still have a residual weakness after 3 years. About 3 percent may suffer a relapse of muscle weakness and tingling sensations many years after the initial attack.

Guillain-Barré syndrome patients face not only physical difficulties, but emotionally painful periods as well. It is often extremely difficult for patients to adjust to sudden paralysis and dependence on others for help with routine daily activities. Patients sometimes need psychological counseling to help them adapt.

So, there’s likely some battles ahead for Eaves, and he’ll certainly be off the ice for a while. Fortunately, though, his case was caught relatively early, as he visited specialists last week after feeling symptoms of weakness. He said in the Ducks’ statement that was critical to his recovery, and that he’s working to fight back from this and get back to playing hockey.

“I want to thank Dr. Robert Watkins Sr. and Dr. Danny Benmoshe for their early diagnosis of my condition, along with the proactive Ducks medical team. Thanks to them and the incredible nurses at Hoag Hospital, I’m on the road to recovery. I’ve received tremendous amount of support over the last few days, most importantly from my family, friends and teammates. I’m determined to fully overcome this and return to the ice as soon as possible.”

The 33-year old Eaves was a crucial trade-deadline acquisition for the Ducks last season, scoring 11 goals in 20 regular-season games with the team. That was part of his career-high 32 goals on the year. He chose to sign a new three-year, $9.45 million deal with them ahead of free agency, and was expected to be part of their top-six forward group this year.  That’s all on hold for now, but Anaheim general manager Bob Murray said in the team statement they’re only worried about supporting Eaves however they can:

“Our sole focus at this time is on Patrick’s general health and well-being. We are grateful his condition was diagnosed early by Dr. Robert Watkins Sr. and Dr. Danny Benmoshe, and thank the staff at Hoag Hospital and our own medical personnel for their efforts. What defines Patrick Eaves is his strength of character, and that will serve him well in his recovery. Our thoughts are with Patrick and his family at this time.”

The thoughts of much of the hockey community will be with Eaves as well. This is a tough diagnosis, and while it’s good to hear that he’s stable and out of intensive care, there could still be plenty of challenges ahead for him. Here’s wishing him the best in his recovery.