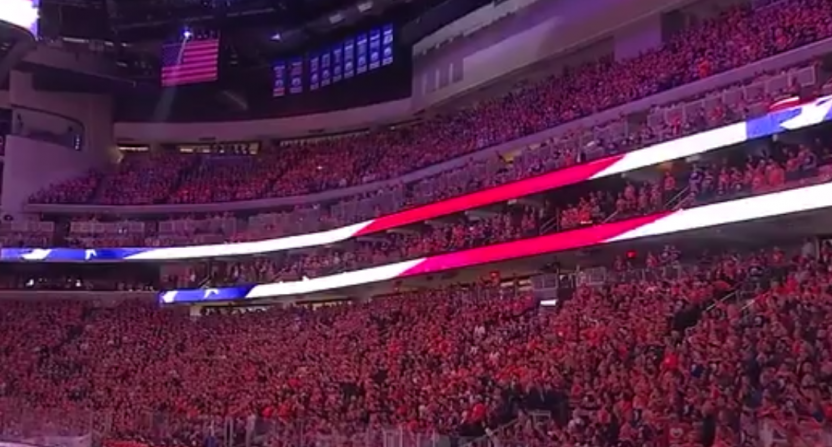 Many Canadian hockey arenas have the crowd participate in singing at least part of the Canadian national anthem. Singing the whole American national anthem, though? That’s something different, but that’s what fans in Edmonton did Sunday night before a game against the Anaheim Ducks after anthem singer Brett Kissel (a Canadian country artist) had his microphone unexpectedly cut out. Kissel rolled with it, and conducted the crowd in a rousing version of “The Star-Spangled Banner”:

An incredible moment
When the mic doesn’t work, the crowd takes over & belts out The Star-Spangled Banner…
…In Edmonton
???? #StanleyCup pic.twitter.com/pWvrlknbV6

That’s pretty great crowd participation, especially for a foreign anthem, and especially for one being played during an emotional series against a team from that country. (And that’s to say nothing of the increased Canada-U.S. tensions over trade disputes, either.) Things haven’t always gone that well, either; there have been plenty of cases of fans on both sides of the border booing the opposing team’s anthem, from Montreal fans booing the U.S. anthem in 2003 and 2009 to San Jose fans booing the Canadian anthem in 2006 and St. Louis fans doing so in 2009. But on this night, the Edmonton fans delivered a remarkable U.S. anthem performance, and created a memorable moment. Kissel gave them a nice shoutout afterwards, too:

Mic didn't work for the anthems tonight @RogersPlace. But no worries. The best singers & fans are in #OilCountry! @EdmontonOilers!

Sadly, this may have been the highlight of the night for those fans, as the Oilers wound up falling 6-3 to the Ducks. They’re still up 2-1 in the series, though, and are in good shape heading into Wednesday’s Game Four in Edmonton. We’ll see how the anthem goes in that one.