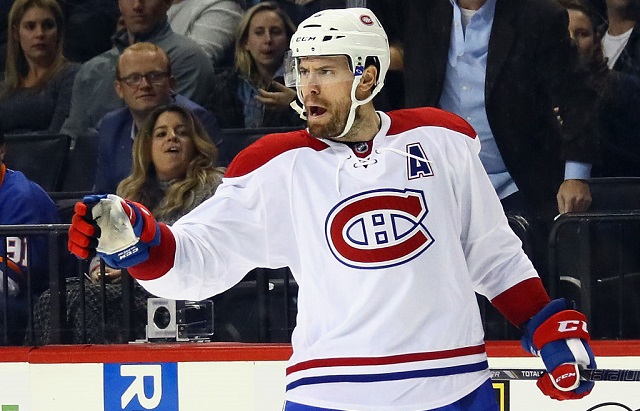 Shut the fuck up about Shea Weber already.

What’s that? I have to write more words? Doesn’t that one sentence make my point? You’re telling me I have to explain myself? My editors are such sticklers for making my point clearly using what some people call facts and evidence. Fine.

So, as I was saying, shut the fuck up about Shea Weber. Sweet Bobby Orr’s balls, we all knew it was possible and maybe even likely that the Montreal Canadiens would be an improved team in 2016-17. The credit for that turnaround would largely go to Carey Price playing more than 12 games like he did last year. But there would always be people dying to ignore that so they could massage Weber’s toughness balls instead.

I never imagined it would be happening before Halloween.

When the Canadiens acquired Weber from the Nashville Predators in exchange for P.K. Subban, many believed that this 1-for-1 trade was a bad one for the Canadiens because Subban is much better, which he is. Then retired players and humans that value grit over talent countered by pointing out Weber’s diminishing game didn’t matter as much as his leadership, heart and dumb shit like that. It was hard for me to tell if I was throwing up this summer because I was dehydrated or because so many people said players don’t like going into corners with Weber for fear they’d evaporate upon contact with the man’s broad shoulders and barrel chest.

Well, here we are. The Canadiens are 7-0-1. Weber has nine points in eight games. There’s a collective hockey media erection because Weber is producing points and the Canadiens are winning.

Meanwhile, in Nashville, the Predators are 2-4-1. Subban has five points in seven games. There’s a collective hockey media victory lap being taken because somehow this coupled with what’s happening in Montreal proves general manager Marc Bergevin is a genius.

What’s fascinating about the Weber jizzapalooza is the incredibly poor memories of people orgasming over the Canadiens’ hot start.

Give Hamonic credit for attempting to block Shea Weber’s BLAST & Did U #LipRead Bailey’s ‘F*ck Me’ lol @peteralper99 pic.twitter.com/U7eHTEaMZn

So if winning really matters to these jackwads pleasuring themselves to Weber’s plus/minus, Subban was doing more winning through his first eight games last year. This year’s Canadiens lost in a shootout at Ottawa in the second game of the season. Was it because Al Montoya, who has played very well this season, allowed three goals? Or was it because Weber didn’t lead enough on that particular night? Why does the hockey world do so many drugs before giving any sort of analysis and why are these people making so much more money than me? The 2016-17 Canadiens are off to an almost identical start to the 2015-16 Canadiens, yet you get the sense Weber’s name is already engraved on the Norris Trophy.

Do we want to look at the underlying numbers of Weber and Subban this season? Does anyone even care? Hasn’t everyone already made up their minds about this trade based on two weeks of hockey? You know what? Screw you. You’re going to read some numbers that have decimal points and you’re going to like it.

Weber’s raw Corsi through seven games is 45.5 percent. He’s not starting as many shifts in the offensive zone as he has in the past, but it’s not really a number that speaks to any sort of 5-on-5 dominance. But as we’ve already covered, Weber is conveniently about intangibles that can’t ever be measured.

What about Subban? He’s at 46.8 percent. He is also starting fewer shifts in the offensive zone. Both he and Weber, at least possession-wise, aren’t faring all that well off the bat. They’re just about having identical seasons as individuals.

Shea Weber's first goal as a @CanadiensMTL is exactly what you hoped it would be… an absolute cannon. pic.twitter.com/heQtSAR3pt

So what’s changed? What’s different? Could it be the air of toughness Weber has carried with him into Canada and has caused the Canadiens to be winners? Is the selfish personality of Subban showboating its way through Tennessee and turning the team into losers?

Sure. Or maybe it’s the .982 even-strength save percentage goaltenders have posted with Weber on the ice this season. It’s weird how with Price and Montoya the number is so high in this small sample size, while Subban’s number defending in front of a pile of urine-soaked English-to-French dictionaries throughout last season was .940.

If the Canadiens had a resurgence this season, this was always going to be A Thing. People desperate to laud Weber and the type of person he is would ignore the improved goaltending either somewhat or entirely in an attempt to show Weber was better than Subban.

It’s October, damn it. The Habs did this last year AND they did it better with Subban. Sometimes, hockey is complicated so it’s easy to come to many different conclusions, but this is not one of those times. Why are so many idiots covering this sport? Why do they do this to me?

If Price misses 60 games and the Habs get to 105 points with Montoya and, I don’t know, a mannequin dressed like Jose Theodore, give Weber the Norris. Although Weber is on pace for about 90 points, so maybe the same people that didn’t want to give the Norris to Erik Karlsson because he’s only good offensively will turn against Weber and give the award to Chris Pronger to celebrate his final season in the NHL.