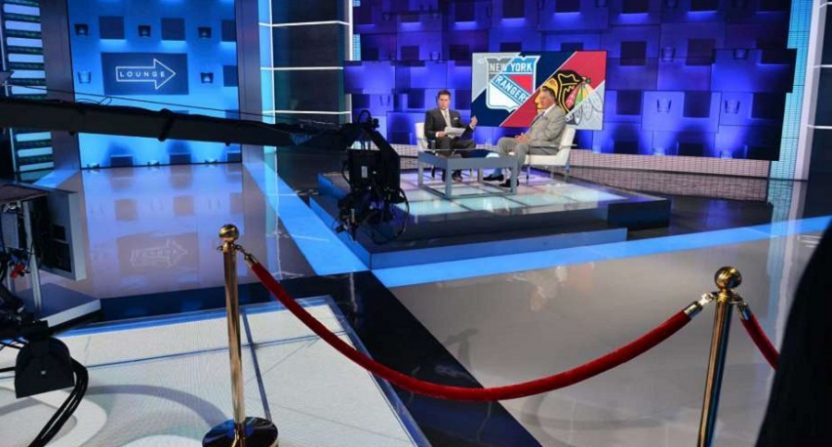 Sorry. Not “no one” in the literal sense. Very few people give a shit about hockey.

Wait, let me specify that very few people in the United States of America give a shit about hockey. It’s an extremely popular sport in Canada, but it’s on par with competitive eating and poker in America. Maybe this will change once we invade and steal Canada’s milk and lumber or whatever.

So when rumors began to swirl that ESPN was planning to lay off 50 or 70 or 100 employees, it only made sense that NHL people would be in the crosshairs. ESPN doesn’t own NHL broadcast rights and pays attention to the NHL the way you pay attention to rotating your tires — every few months you may or may not remember to do it and no one really notices if you don’t. It was inevitable when the layoffs were announced that hockey would take a hit.

And relative to the number of staffers dropped, NHL was massacred. Pierre LeBrun, Scott Burnside and Joe McDonald — three objectively qualified, talented and top-notch reporters in the business — all said their goodbyes on Twitter on Wednesday. The news was released hours before the start of the second round of the playoffs, which speaks to how much ESPN cared about hockey.

After 13 years of sticks and pucks can share that as of today my tenure at ESPN is at a close. I look forward to the next adventure.

Three of 100 isn’t a huge number of layoffs, but when that three represents more than half of the hockey writing staff, it’s massive.

What were the underlying reasons for the hockey layoffs? They’re not really different than the underlying reasons for all the layoffs — ESPN paid too much money for broadcasting rights to other sports leagues, cable rates increased, people cut the cord to ESPN and the network lost money. And since these people aren’t regulars on a sports shouting show, they were let go.

That’s all standard boilerplate stuff when it comes to media layoffs. Changing landscape, less money to go around because media companies haven’t figured out how to properly monetize on other platforms, fat gets trimmed, blah blah blah.

But when it comes to the NHL layoffs, how much blame does the NHL deserve?

We can all agree, even if we like hockey, that the NHL is as popular a senior circuit doubles tennis. Are there things the NHL could have done to make itself more popular and thus making hockey media jobs (how do I even have one?) more secure? Or was hockey always destined to find itself in ratings wars with car shows and late-night replays of that afternoon’s thoroughbred racing?

Well folks, as you can tell by my new Twitter handle, I was also among the cuts today at ESPN.

If the NHL was able to sell its broadcasting rights to ESPN instead of taking the bigger offer from NBC, would the NHL be more popular today? Coming out of the second lockout in 2005, the NHL partnered with the Outdoor Life Network (lol) which became Versus which became NBCSN. After pissing away a full season out of greed and stupidity, the NHL had to take what it could get. But in 2011, the NHL renewed its deal with NBC for 10 years at $200 million per year and, because of the terms of the contract, NBC had the right to match any offer from another network. ESPN was part of the bidding, but NBC was always willing to match what ESPN was willing to pay.

So here we are in 2016 with the NHL on a network that should be promoting the league like that parent who gives constant Facebook updates about a child in a tee-ball league, yet it seems to still be an afterthought, much like it was on ESPN in the 1990s and probably would have been to an extent if ESPN had won the broadcasting contract in 2011.

Can you imagine Stephen A. Smith and Max Kellerman screaming about Phil Kessel being a locker room cancer? Sidney Crosby being overrated? P.K. Subban being too selfish? Alex Ovechkin being an overrated loser that would never win a Stanley Cup?

Or SportsCenter leading with a 6-5 overtime game between the Dallas Stars and Minnesota Wild because the game just ended on the network, followed by cogent analysis from… someone? Or substantial talk involving… someone… on trade deadline day? Or free agency day?

Now that you’ve imagined all that, can you say that the NHL would have reached a level of popularity since 2011 (or even 2005) that would have made a hockey media job less expendable?

I’d love to say yes and take an opportunity to crap on the NHL and ESPN at the same time (we call that a Melrose Steamer), but I don’t think anyone can say for sure. Good people probably still get pink slips today.

After nearly eight years of covering the NHL, MLB and the NFL at ESPN, it's time for the next chapter in my career.

What if the NHL wasn’t inept at marketing its players? What if it highlighted stars instead of teams, and we didn’t have to watch 15 Buffalo Sabres games per year on NBCSN because that’s a good local market for ratings? What if the NHL and NBC didn’t make us watch the same five teams all the time? What if hockey players didn’t act like wet mops in the front of cameras and actually had or showed personality?

Would any of that over the past two decades have resulted in a bigger dent in the sports media landscape?

Maybe, but asking the NHL to stop shooting itself in the crotch or players to break free of the culture that discourages individualism is like asking Dunkin Donuts to stop the light beer of coffee.

The only thing you can pin on the NHL in terms of dwindling media coverage is the league’s shortsightedness as a whole, specifically three lockouts in 18 years that shut the league down for a combined two years. There’s really no business in the world that can survive that. Well, it can survive it, but there’s no way it doesn’t damage its ability to grow, and if the game isn’t growing, it’s not attracting new fans, and if it’s not attracting new fans, that’s fewer people to consume any NHL-related media.

So is the NHL to blame for ESPN’s hockey bloodbath Wednesday? This is like one of those Law & Order cases where Jack McCoy goes after a gun or pharmaceutical company over something tangentially related to the crime. Yeah, you want to see the evil entity held accountable, but in your heart, you know the argument is too convoluted for any jury to come back with a guilty verdict.

Is there any grand lesson to be learned in all this? To me, the answer is yes and it’s very obvious: Do literally anything else for a living besides something in sports media and specifically hockey media.

This business is awful. It’s way more fun from the outside than it is from the inside. It’s basically one of those traveling fairs that come to your town once a year. It always seems like a good idea yet once you get there, yeah, it’s not the worst, but you will very quickly realize you should have done anything else with your Saturday besides this.

There is no rhyme or reason to who finds success or gets laid off. Skip Bayless is a multi-millionaire! It’s not really a business of merit. That’s fine, because all this is subjective, but before you decide on going after that journalism degree, just know there’s a decent chance you’re going to get laid off at some point no matter the quality of your work. That’s just the way it is. Maybe that changes in the coming years as media companies get a better understanding of new consumption habits.

But by the time people figure out cord-cutting, there will be some new shit people don’t understand. “I used to watch on my phone, but every since I installed the iBrain into my cerebral cortex, I haven’t missed a single minute of the Mars Red Rocks, my favorite Robotball team.” You just don’t know. It’s not that other businesses aren’t susceptible to this, but it feels like anything media-related is on the shakiest ground possible.

You’d think I’d have a point by now, but I don’t, really. Just consider doing something else for a living. You need to win the Bill Simmons Lottery to wind up in his Teflon shoes. It’s way more likely you’ll be a nameless person that loses their job when Lifetime pays too much for the broadcast rights to Women’s Death Ball in 2033 and decides you’re expendable three years later.

Wait, I know the lesson. No matter the year, no matter the platform, no matter what happens in the world between now and when Donald Trump triggers nuclear war, one thing will never change.