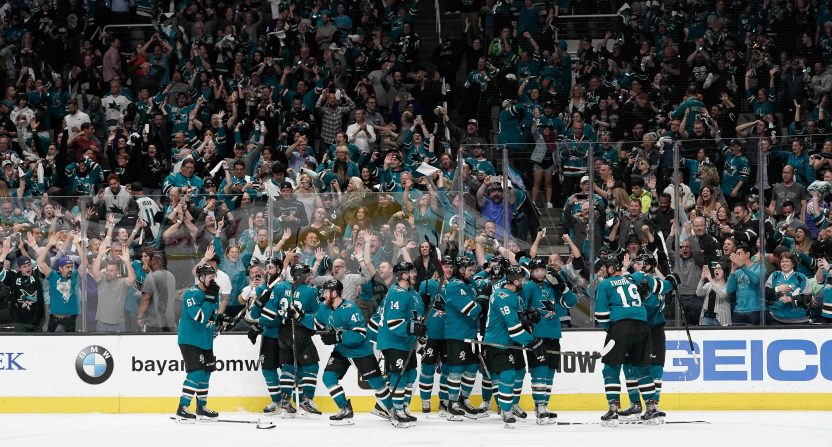 The opening round of the NHL playoffs wrapped up on Wednesday with a Game 7 double overtime comeback victory by the Carolina Hurricanes against the Washington Capitals. It was a fitting conclusion to the madness of a first round that included the exit of just about every favorite and some of the wildest games in hockey history.

But maybe we should come to expect such craziness in the NHL playoffs?

Let’s quickly recap the first round, now that the defending champion Capitals are out and we’re on to the second round. We could spend pages and pages trying to highlight just how wacky things were.

While watching the bonkers game that was Game 7 between the San Jose Sharks and Vegas Golden Knights, it became apparent that the NHL playoffs are their own animal. That’s always been a bit obvious, but this year felt like it completed a transition into a territory where any sense of normalcy goes out the window.

In case you haven’t seen it, take five minutes out of your day and relive the Sharks-Golden Knights game that turned logic and reason on its head.

How can you possibly predict or explain that outcome? The momentum shifts in the span of the third period were incredible, with the Golden Knights looking to coast to victory before one bad injury and four power play goals turned the table. On queue, the Golden Knights score in the final minute and overtime was needed to decide things. The game had it all.

That Game 7 between the Sharks and Golden Knights will be the focal point of a first round that defied reason. That’s saying something considering the Tampa Bay Lightning had a playoff collapse for the ages, the Pittsburgh Penguins were swept and some sort of wild turn of events marked just about every series.

No one could have predicted that the major players, big markets and most familiar faces would all be home watching the beginning of the second round. Take a look at the teams who are left standing to compete for the Stanley Cup. It’s not your usual cast of characters.

The 2019 Second Round opens with a doubleheader Thursday, in Boston and St. Louis.

Got all that? Summarized, the NHL playoffs had an extra dose of crazy this year and it’s difficult to imagine the remaining rounds living up to the standard set in the first matchups.

But, as we alluded to above, maybe this is what we should have expected. The NHL playoffs are arguably hockey at its finest, with just about every moment resulting in a pivotal play that can alter the course of a team’s playoff destiny. The unexpected happened so frequently in the first round that it might make more sense to expect the most outlandish outcomes because they seem to happen regularly.

The insanity of the NHL playoffs is an annual discussion. Some years might be a bit more off the wall than most, such is the case in 2019, but there’s almost always a bundle of “I can’t believe that just happened!” moments in every postseason.

Even when you’re bracing for the unexpected, such as the fact you could just feel the Sharks about to explode for a bundle of power play goals, it doesn’t take away from the excitement when it actually happens. You’ll still be yelling at your TV each and every time. The excitement doesn’t lessen any when insanity becomes the norm.

There’s a reason this tweet from 2014 is shared every time the playoffs roll around.