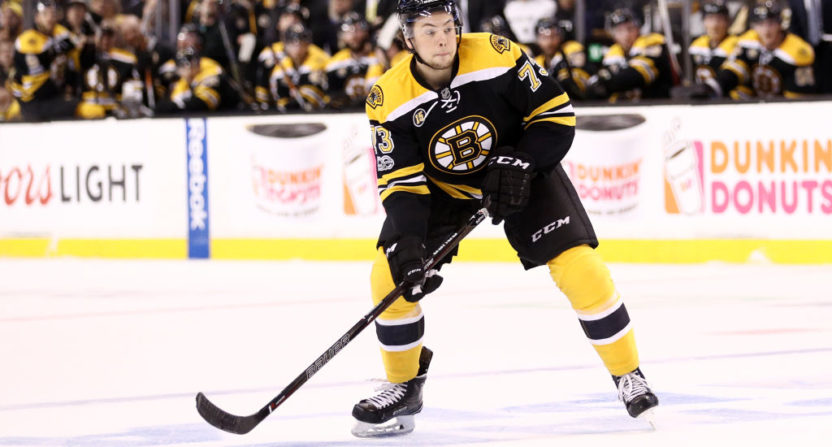 Over the last few years, the NHL has seen an influx of young talent like never before. Players like Toronto Maple Leafs forward Auston Matthews and Edmonton Oilers forward Connor McDavid have flipped the script on the league. The emphasis in the sport is now on speed and youth. Gone are the years of rough-and-tumble players dominating games. Skill rules all.

The next crop of NHL players is going to impress, but there isn’t a name like Matthews or McDavid in the group that will dominate the league. The sheer amount of players that are set up to succeed should allow plenty to make their mark.

The Arizona Coyotes forward and former Boston University standout is ready to be a difference-maker in the desert. Keller put up 45 points in 31 games last season for the Terriers. Representing the United States during the World Junior Championship, Keller put up 11 points in seven games against the world’s best.

He joins a Coyotes team that is on the upswing, but is without a player that can take over games. It’s presumptuous to assume that Keller can do so, but the former lottery pick certainly has the necessary tools. He should get opportunities toward the top of the Coyotes’ lineup and that could lead to massive point totals in the NHL.

McAvoy is another former Boston University star that got an opportunity to play defense with the Boston Bruins during the 2016-17 Stanley Cup playoffs. Initially signed to a professional tryout to their minor-league team, the Bruins called McAvoy up after injuries struck the team. Playing in six playoff games, McAvoy put up three points, all of which were assists. In a tight spot, he excelled. Now with a tiny bit of confidence, McAvoy is ready to anchor a middling Bruins defense.

With Zdeno Chara now 40 years old and Torey Krug still only viewed as an offensively-focused player, McAvoy has the right mix of skills to take off as a leader. Having produced at every stop in his young career, the bright lights don’t scare McAvoy. And in a hockey-obsessed town like Boston, he should fit right in. Don’t be surprised if McAvoy gets top-pairing minutes during his rookie year.

The Vancouver Canucks forward prospect has been a top prospect for so long that it feels like his rookie season should have already come and gone. Boeser played for the University of North Dakota in the NCAA, and after an injury sidelined a portion of his 2016-17 season, it wasn’t completely certain how the Canucks would tackle his developmental path.

The Canucks are on the bottom rung of the NHL, and were well out of the playoffs when they called Boeser up for a nine-game trial. Boeser didn’t disappoint, scoring four goals in those nine games. He gives hope to a franchise that doesn’t have much at the moment. He’ll get all the chances to be the offensive dynamo the team needs.

The New York Islanders forward made waves when he decided to wear the No. 66. Many in the league believed that the number shouldn’t be worn after Mario Lemieux wore it for all those years with the Pittsburgh Penguins. Ho-Sang never relented and stuck with the number. He may also have shades of Lemieux’s game in his skillset.

Ho-Sang played in 21 games last year for the Islanders and put up 10 points. While they may look like pedestrian numbers, Ho-Sang is electrifying with the puck on his stick. He is both a creator and a shooter with flash that many in the league don’t have. As the Islanders try to make sure that center John Tavares stays with the team after this year, they may not have to look further than Ho-Sang as a chip to prove that the future is bright.

The first overall draft pick in the 2017 NHL Draft, Hischier is going to be given the keys to the castle with the New Jersey Devils. The Swiss forward slices and dices his way through defenses, and for a team lacking creativity, Hischier is just what the doctor ordered.

Not as well-seasoned as the other players on this list, Hischier may have first-year growing pains with the Devils. The difference between him and other rookies is that the Devils don’t expect to compete this year. Hischier will have a chance to find his game and hone it at the NHL level. A rare opportunity given to young players, Hischier will take that ice time and not give it back. He’ll be a cornerstone for the Devils for years to come.