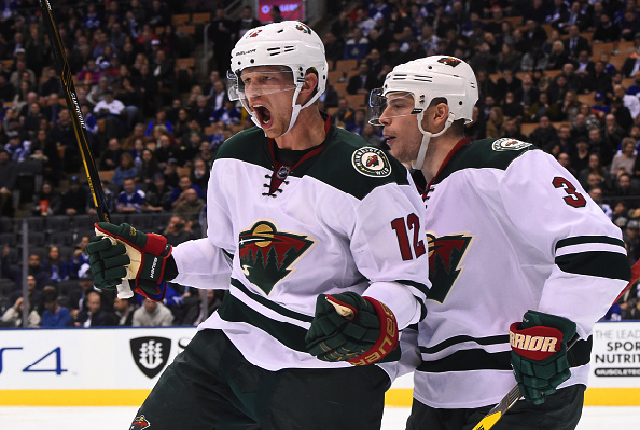 Predictions are always difficult to make when it comes to individual performance. From one season to the next, a player could have a career-best season followed by their career-worst. There are patterns indicating why a sudden breakout might occur, but a good surprise is always fun.

A slew of veterans have taken their play to the next level or simply revived their careers in 2016-17. Here’s a breakdown of five players who have put up surprising seasons as we get closer and closer to the NHL season’s halfway point.

What did we do to deserve Nikita Kucherov? #WSHvsTBL pic.twitter.com/jahT7qeqBn

The 23-year-old left winger has always possessed plenty of skill, but Kucherov’s taken his game to new heights. After scoring at more than a point-per-game pace during last season’s playoffs, Kucherov has increased his production to a personal best in 2016-17. He ranks atop Lightning scorers with 13 goals, 17 assists and 30 points in 28 games.

With star Steven Stamkos out indefinitely, Kucherov has taken over as Tampa Bay’s go-to offensive threat, carrying the responsibility with ease. He’s played with an ever-changing group of linemates, but continues to generate shots (52.1 Corsi For percentage) and produce offense. He’s excellent in most offensive situations. Kucherov has a decent shot at continuing his torrid pace.

Lightning general manager Steve Yzerman did well to lock him up in October with a three-year, $14.3 million extension — a deal already among the league’s best. What’s perhaps scariest is Kucherov is still young enough to continue getting much better. But the Lightning will gladly take his current pace. Once a healthy Stamkos returns, oh baby, Tampa Bay is going to be killer.

It’s been said before, but goaltenders are freakin’ voodoo. Johnson is a prime example of that.

A career backup, Johnson got some attention holding down the fort in 2015-16 with the Buffalo Sabres, when Robin Lehner suffered an injury. The 31-year-old (with 48 career starts at the NHL level since 2009-10) managed to make 40 starts with the Sabres, posting decent numbers with a 22-16 record, along with a 2.36 GAA and a .910 save percentage.

The Calgary Flames decided to take a one-year flier on Johnson, knowing he’d be a capable backup to newly acquired starter Brian Elliott. But 30+ games into the season, he’s now started the bulk of games while Elliott has ridden the pine.

Johnson’s gone 13-6 with a 2.22 GAA and a .924 save percentage — a number which jumps to .931 at even strength. He’s helped propel Calgary from a horrendous start back into playoff contention. Johnson isn’t the sexist goalie in terms of name value, but his production has been way above anything anybody could have expected at this point. Elliott is a good goalie and could recapture his starting job, but Johnson’s proven he can handle a full-time gig and is a legit starting threat. Time will tell if that’s in Calgary for the remainder of the season.

Staal was once one of the NHL’s premiere players. It’s sort of crazy to think about now, but he netted 100 points in his second season and scored 35+ goals multiple times in his career. Playing in Carolina overshadowed his accomplishments. But in recent seasons, Staal’s been relegated to a slightly above-average offensive player, who’s viewed as a middle-six talent. That’s changed in his first season in Minnesota.

The 32-year-old’s found a perfect fit with the Wild, acting as the club’s top center, anchoring a line with Zach Parise. On the season, Staal has scored 10 times (he scored 13 in 83 games in 2015-16) and added 14 assists for 24 points in 30 games. With nine even strength goals, four of which are game-winners, Staal has been a tremendous addition for Bruce Boudreau’s club. However, shooting a 7.85 percentage at even strength also indicates his scoring production has been fluky.

Minnesota has won 60 percent of their games in 2016-17 and Staal is a big reason why. He’s undergoing a much-needed bounce-back season, showing that he isn’t a washed-up vet.

Selected 112th overall in the 2014 NHL Draft, Arvidsson has never been drawn a lot of attention. But the talented Swede continues to get better and better as a pro, with this season acting as his big breakout.

How can you not love this guy? @LyndsayRowley talks with THE Viktor Arvidsson after during the first intermission. #COLvsNSH #Preds pic.twitter.com/1YNsLcP0Qy

Arvidsson appeared in 62 career games before 2016-17, totaling eight goals and 16 points. The 5-foot-9 right winger appeared to be a nice bottom-six piece with some offensive upside. The 23-year-old has taken a big step forward with nine goals, 11 assists, and 20 points in 30 games with the Preds, ranking second in team scoring behind linemate Ryan Johansen.

He’s shooting the puck at an absurd rate, ranking second league-wide with 12.88 shots per sixty minutes — tied for second with Auston Matthews and Jeff Skinner with 85 total shots at even strength. He wouldn’t have been in my top 100 guesses for that. Arvidsson puts pucks on net and is helping the Predators big time.

Arvidsson likes to shoot the puck and he’s getting rewarded for doing so. He’s evolved from depth piece to a player Nashville should look to lock up long-term.

Frankly, I could list about half a dozen options from the Blue Jackets in the surprise category, as the team’s been ridiculously hot this season, but Bobrovsky’s comeback’s been among the best stories in the NHL.

The former Vezina-winner had a season to forget in 2015-16, much like all Columbus fans and players, filled with injuries and disappointing results. With the Blue Jackets bottoming out, Bobrovsky appeared to be an expendable piece with rookie Joonas Korpisalo outplaying him throughout the season. Back and fully healthy, Bobrovsky has played like BOBROVSKY, returning to his Vezina form from a few seasons ago.

Bob leads the league in wins with 19 and has posted a startling .932 save percentage (.939 at 5v5) and 1.90 goals against average. His consistent performance’s propelled the Blue Jackets into one of the league’s best teams. If the season ended right now, Bobrovsky would earn his second Vezina Trophy. Consider last year a mulligan — Bobrovsky is back and making the Blue Jackets fun again. Who would have thought?