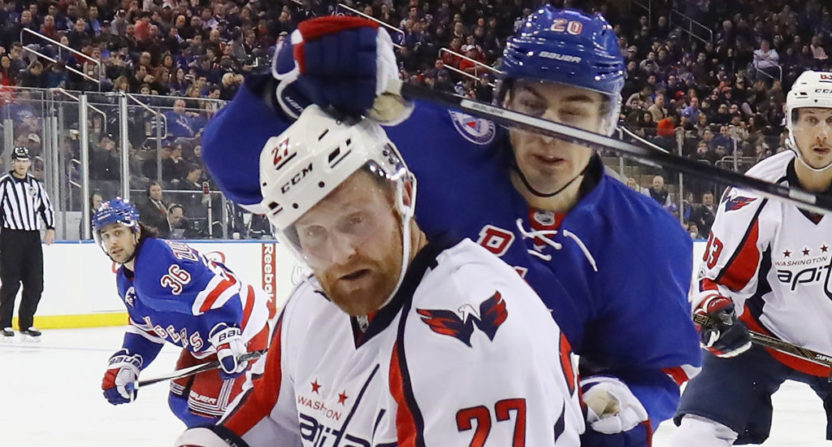 On Canada Day, our neighbors to the north celebrate everything that is great about Canada, including the maple leaf flag, the Tragically Hip and of course, the first day of NHL free agency. While not the circus the NBA has become, there are always head-scratching moves to laugh at, as some GMs wildly overpay players who get paid because the free agent class itself is terribly small and not filled with much quality. And some of the players’ individual reactions to their new teams are also weird and silly. Here are just a few of the silliest quotes and comments from players and GM’s from the NHL’s 2017 edition of free agent frenzy:

Karl Alzner signs with the Canadiens for “playoff success”

Alzner spent the first nine years of his career with the perennially-underachieving Washington Capitals, but had to find a new home because of their cap crunch . He found one with the Montreal Canadiens for a reasonable $4.625 AAV, but his quote to the media about why he signed with the Habs is… odd.

Alzner couldn't overlook #Caps playoff failures: "I want to win. … It was frustrating to keep getting stumped in the second round."

Interesting then that he chose the Habs, who have made some legendarily stupid moves and have only been out of the second round of the postseason twice since Alzner joined the Capitals. And they’ve won five playoff series during his career to Washington’s six. He’s not going to the Penguins or other teams with proven playoff pedigrees, he’s going to a team that flamed out in round one last year to a Rangers team that had no D corps to speak of. But one thing will be consistent from Washington to Montreal: he’ll hear about it endlessly if there are more playoff failures on his resume.

Brian Elliott’s move from St. Louis to Calgary last year didn’t exactly go as planned. As a free agent, he’s gone from the Albertan prairies to Philadelphia to see if he can help settle a permanently unsettled goaltending position. He’ll be splitting time with Michal Neuvirth, and was asked by the media whether goaltending duos can be successful.

Brian Elliott, asked if a goaltending tandem can have success, points to the Penguins. Yep.

Naturally, he’s right, but the sure-fire way to get off on the wrong foot in Philadelphia is to say the Penguins are good at anything. This is a team that didn’t want to send Mark Streit directly to the Penguins, so they sent him to Tampa who then flipped him to Pittsburgh. So a Flyer saying good things about the Penguins is a weird look.

While this isn’t a player signing, Joe Sakic has been the center of attention because of all of the rumors swirling around a potential Matt Duchene trade, which still hasn’t happened. The Avs are a terrible hockey team and need to re-build, but Sakic has been steadfastly refusing almost every potential overture for his star. So when he talked to the media after the Avs relatively dull July 1 shopping was done, he said this:

Joe Sakic on Duchene trade rumors: "I don't really have to say much about any rumors. I don't create the rumors & I don't comment on them."

But aren’t you commenting on the situation right now? And you’re not making yourself look any better with these comments either. Sakic needs to make this trade in order to really get the rebuild in Colorado going, and as long as he’s making comments like this, he’s not going to settle the situation in any way. Oh, and then he added this about improving his D group:

Sakic on team's defense: "I'd love to upgrade the D, for sure, if we could. Not as easy as you think…we're always looking in that dept"

There was an offer on the table from the Islanders to get Matt Duchene that included… wait for it…Travis Hamonic (since sent to the Flames), who is better than every defenseman the Avs currently have on their books. Maybe finding good D is actually easier than you think.

Panthers put together enforcer “highlights” for Micheal Haley, Dale Tallon says they need “good players that are tough” before signing him

No one except the hardest of hard core hockey fans will have noticed the Panthers signing former Shark Micheal Haley. He’s a tough-guy, fourth-line scrapper whose brand of hockey is supposedly dying off faster than the world’s bee population. And yet somehow, the fine folks at the Panthers PR staff found a way to put together a “highlight” video of his greatest exploits.

Notice how there is only one goal and a bunch of small cut-ups of two fights he’s been in. When that’s all you can say about a free agent signing, it’s probably not a very good one.

Panthers GM Dale Tallon had this to say about his new signing:

Tallon re: Haley: "He fills a need for our club & will help us get back to playing with the sort of passion and grit that will help us win"

Which is weird, because just two days earlier, he said this about “replacing” Shawn Thornton, another notoriously useless enforcer:

Dale Tallon answers a fan question about the possibility of adding a tough guy to the Panthers’ roster to replace Shawn Thornton: pic.twitter.com/gJsIUNNJIk

Well, Haley in 130 NHL games has a grand total of five goals and 11 assists. That’s some offensive punch that he’s going to provide.

And just because July 1 is Canada Day… here’s Patrick Wiercioch, new Canucks’ defender, thinking that Canada is a city.

Wiercioch : "It's special to be playing in Canada, my hometown. That's something you can't pass up on." #Canucks

Well… sort of. He’s from Burnaby, just outside of Vancouver, and his earlier comments don’t make this one seem so weird, but the implication in the tweet is he thinks Canada is a city. Perfect for Canada Day, eh?

And, because it wouldn’t be July 1 without a stupid comment from a media member…

The most Pierre line of all time pic.twitter.com/lMvo3D3hu2

Nothing is dumber, or creepier, than that.