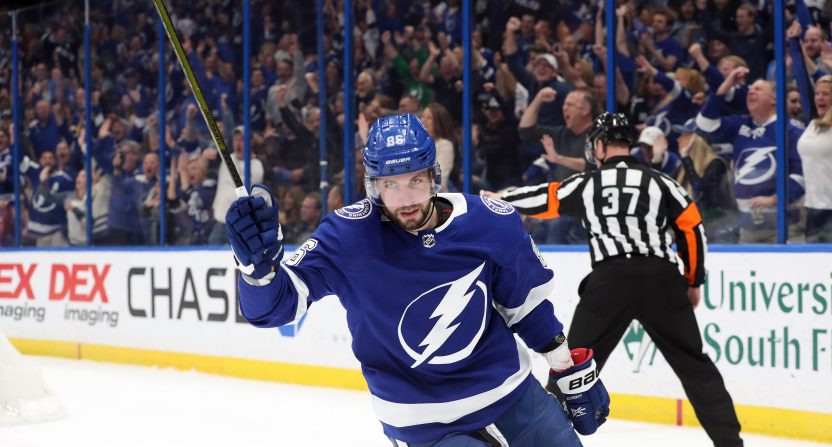 The 2018-19 NHL season is rapidly approaching its grand conclusion. Teams are jockeying for playoff berths, battling for the top division spots and assessing injuries before the real fun begins.

With the regular season winding down, what should you be watching before the year wraps up?

Countless articles have been written discussing just how good the Tampa Bay Lightning have been this season. They lead the league in wins by a huge margin, they’ve scored the most goals, they have the best power play and the most effective penalty kill. They have separated themselves from the entire NHL as the clear team to beat and favorite to hoist the Stanley Cup.

The Lightning already have their playoff ticket punched, so why should you be following them?

This year’s Lightning are proving that they deserve to be in the conversation as one of the NHL’s best-ever teams.

The @TBLightning matched the NHL record for fewest games to 50 wins in a season.

Looking at the historical view, the 1995-96 Detroit Red Wings ended up with 131 points, narrowly falling short of the league record of 132 points set by the 1976-77 Montreal Canadiens.

The Lightning have an absurd 110 points through 70 games. How high can they climb before their regular season campaign concludes?

Can Arizona maintain their late push?

The Arizona Coyotes may be the most overlooked and underrated story this season. The Coyotes have hung around the playoff hunt despite some serious injuries on their roster. And then more injuries. Followed by even more injuries.

Back on March 7, they already had nearly 400 man-games lost to injury – a stat that combines the total number of games missed due to injuries on the roster.

Despite the injuries, the Coyotes are still right in the thick of things. How have they done it?

Glancing through their statistics, you’ll find that they have a team effort to thank for their position in the standings. Their leading scorer is 34-year-old Brad Richardson who has 14 goals on the year. Clayton Keller has the most points with just 44. Offense has been through a by committee approach, while the defensive scheme has pushed the Coyotes to some key victories.

The Coyotes have also received some outstanding goaltending from Darcy Kuemper. His 2.51 GAA and .920 save percentage has carried the Coyotes following Antti Raanta injury-filled year.

Can they complete their unlikely push into the postseason?

Jack Hughes has been widely considered the top choice for the 2019 NHL Entry Draft. The American phenom has teams drooling, fantasizing about a lineup with the youngster guiding their offense. Fans have been asking their respective teams to “Lose for Hughes” in the hopes that the young star can help rejuvenate their franchise.

Who has the best odds to land Hughes as the season wraps?

The basement-dwelling Ottawa Senators look like they’d be a contender for Hughes, but they lost their first-round pick in a trade with the Colorado Avalanche. As a result, the Avs currently have the best odds to select first. From there, the Detroit Red Wings, LA Kings and New Jersey Devils are in a three-way battle to see who can suck the most before the season ends.

Earlier this year, we discussed that the NHL could see a wave of 50-goal scorers this season. Alex Ovechkin has the last three 50-goal seasons to his name and is once again poised to hit the elusive plateau.

But, with goal scoring on the rise, there are several players who are in position to hit notable milestones.

With Ovechkin sitting at 46 goals, he is tailed by the unlikely Leon Draisaitl (42 goals), Patrick Kane (41 goals), John Tavares (38 goals) and Cam Atkinson (38 goals). A total of 11 players have scored 35 or more goals heading into the year’s final stretch. More impressive is the fact 31 players have already reached 30+ goals this year. That nearly matches the total number of players who hit the same mark last year (32).

Summarized, fans are witnessing more players posting gaudy goal totals. Ovechkin could have company this year at the top of the 50-goal summit and it may take some time to analyze the rise in scoring this season.

Who is your MVP?

Speaking of outstanding scorers, who should be the league’s MVP?

Ovechkin, as mentioned above, is once again in position to score 50 goals in a season. That’s crazy impressive, but it may not earn him the league’s top accolade thanks to a wild season from Tampa Bay’s Nikita Kucherov.

Kucherov has tallied 111 points in 70 games and should be the lock for MVP. His accomplishments have earned praise around the league, including from opposing teams.

Kucherov has quickly become one of the best Russians to ever skate in the NHL. Should his offensive pace continue, he could best Alexander Mogilny’s 127-point season from 1992-93 and claim the most points ever scored in a season by a Russian player. He is a player you should be watching every time he takes the ice.

Time will tell whether or not the right choice was made when the league’s MVP is announced.