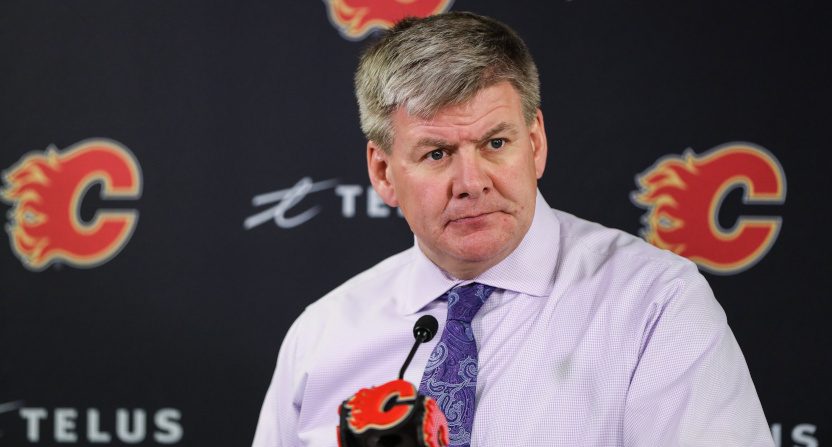 Mike Babcock’s firing as head coach of the Toronto Maple Leafs last week has indirectly led to current Calgary Flames’ head coach Bill Peters coming under a lot of fire. Peters (seen above during a press conference after a Nov. 19 game against the Colorado Avalanche) worked under Babcock in the Detroit Red Wings’ organization from 2011-2014 as an assistant coach before taking a head coaching job with the Carolina Hurricanes; he held that role until resigning last April, then took over as the Flames’ head coach a few days later. Now, he’s being accused of uttering racial slurs, physically abusing players and more.

How did we get here? Well, amidst the Babcock-firing discussion came discussion of a controversial motivational tactic Babcock used in the 2016-17 season, making Marner (then a rookie) rank the team’s other players based on their perceived work ethic and then showing that list to those Marner ranked at the bottom. And that prompted a series of tweets Monday evening from Akim Aliu, a 30-year-old current free agent (he last played with the Orlando Solar Bears in the ECHL earlier this year) about what Peters allegedly said to him during Aliu’s time with the AHL’s Rockford Ice Hogs (the Chicago Blackhawks’ AHL affiliate) in 2008-09 and 2009-10, a period where Peters was the Ice Hogs’ head coach:

Not very surprising the things we’re hearing about Babcock. Apple doesn’t fall far from the Tree, same sort of deal with his protege in YYC. Dropped the N bomb several times towards me in the dressing room in my rookie year because he didn’t like my choice of music. First one to

admit I rebelled against him. Wouldn’t you? And instead of remedying the situation, he wrote a letter to John McDonough and Stan Bowman to have me sent down to the ECHL. 20 year old on pace for 20 goals in his first pro year with zero PP/PK time was off to a great start in his

Aliu and others then expanded on that to TSN’s Frank Seravelli Tuesday, saying that happened before a morning skate during the 2009-10 season when Aliu was controlling the team’s locker room music:

“He walked in before a morning pre-game skate and said ‘Hey Akim, I’m sick of you playing that n—– s—,’ ” Aliu told TSN, with Peters, who was then the Ice Hogs head coach, referring to Aliu’s selection of hip-hop music. “He said ‘I’m sick of hearing this n—–s f—— other n—–s in the ass stuff.’

“He then walked out like nothing ever happened. You could hear a pin drop in the room, everything went dead silent. I just sat down in my stall, didn’t say a word.”

Two of Aliu’s Rockford teammates who were in the room at the time of the alleged incident, Simon Pepin and Peter MacArthur, independently corroborated Aliu’s account to TSN on Tuesday.

“I think everyone should be held accountable for their actions or words spoken,” Pepin said.

Aliu said Rockford team captain Jake Dowell later confronted Peters about the incident in the coach’s office. Dowell declined to comment, but said he would cooperate in any investigation conducted by the NHL or the Flames.

When Peters then called Aliu into his office to talk about it, Aliu said Peters did not apologize. Instead, Peters again expressed his displeasure in Aliu’s choice of music for the dressing room, with Aliu saying Peters said: “You know, I’m just sick of this n—– s—. It’s every day. From now on, we need to play different music.”

As a sidebar here, some might wonder why Aliu would come forward so long after the fact. Well, it’s not uncommon for incidents to only come to light years later, especially when there was not much internal backlash to them at the time (as the Dowell story there shows). And Aliu in particular had reasons to not challenge the status quo further at the time; he was once seen as an extremely hot prospect, but his draft stock took a fall (he wound up being picked 56th overall in 2007) after he challenged a hazing incident in junior hockey, as Gare Joyce relates in Future Greats and Heartbreaks (a 2007 book that’s still a very valuable read for those interested in NHL scouting)

The Bill Peters story is so bad that you can almost gloss over this detail in TSN’s report: Akim Aliu refused to take part in some stupid, homophobic hazing ritual in jr hockey and came out of it as a bad team guy. pic.twitter.com/DvwRAie9JM

If you're looking for reasons a player might keep racial slurs to himself for 10 years rather than sharing the story publicly as it happened, this quote from Gare Joyce's book Future Greats and Heartbreaks offers a good one.

The player being discussed is Akim Aliu. pic.twitter.com/jYp8UjzI5c

And Aliu is not alone here. Another former Rockford player, Sean McMorrow (who played there in 2008-09), added further criticisms:

If you think Mike Commodore had harsh words for Babcock you are in for a treat to hear what I would have to say about Bill Peters … Worst human being to ever coach me … treated me terrible on a AHL team (IceHogs) where I won a League Award for Community Service. #badguy pic.twitter.com/oJ0DqLI9Ey

The Flames told Seravelli they’re conducting a “full investigation.” Peters coached the team Monday night against the Pittsburgh Penguins (Calgary lost 3-2 in overtime), but didn’t speak to media afterwards, and he wasn’t on-ice for the team’s practice in Buffalo Tuesday. And Aliu’s allegations aren’t the only ones being levied against Peters. Michal Jordán, a 29-year-old defenseman currently playing for Amur Khabarovsk in the KHL, tweeted that Peters physically kicked him and punched another player in the head during games (Jordán played in the Hurricanes’ organization from 2010-2016, and was with the NHL team in 2012-13, 2014-15, and 2015-16):

1) Never wish anything bad to the person but you get what you deserve Bill.After years making it to the NHL had experience with the worst coach ever by far.Kicking me and punching other player to the head during the game…

2) then pretending like nothing happened…couldnt believe my eyes what can happen in the best league.. happy that i dont have to go thrue that stuff on daily basics anymore.

And Willie Läck, father of goalie Eddie Läck (a current free agent, he played with the Hurricanes from 2015-17) added some further shots at Peters:

Well mr Peters, you talk so much of being a man so now is your time to come clean about what kind of a man you are or are you going to let the truth hit you?

Interestingly enough, Rogers Sportsnet (Canada’s national NHL rightsholder and also the local rightsholder for the Flames) apparently briefly reported Tuesday morning that Peters had been fired, only to then take that tweet down amidst reporting from competitor TSN and others that Peters had not been fired yet:

"The Calgary Flames have fired head coach Bill Peters in response to allegations made by former player Akim Aliu on social media, according to Sportsnet’s Jeff Marek."

@Sportsnet I went to comment on your previous tweet about Bill Peters being fired, but it’s been deleted. Pretty sloppy media work there in your reporting, only 1000X worse when your the host broadcaster of the #flames

Still, there are plenty predicting that this will in fact lead to Peters’ firing. We’ll see what happens there.