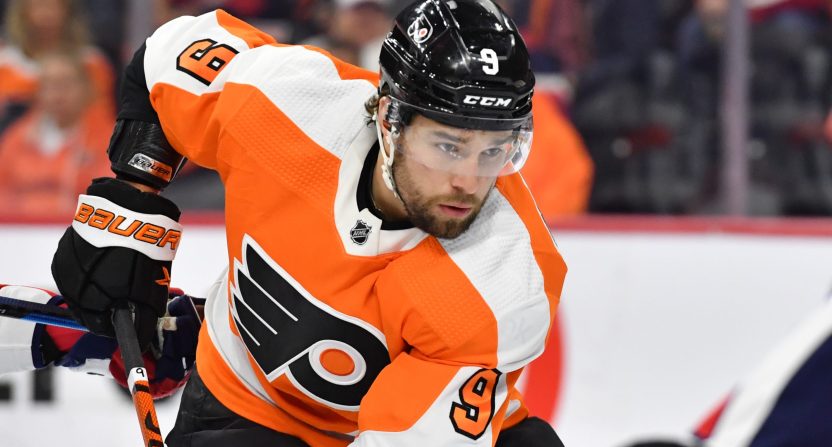 The Philadelphia Flyers took on the Anaheim Ducks on Tuesday in a game that held a pregame celebration for the Flyers’ annual Pride Night. Flyers players wore Pride-themed jerseys and used warmup sticks wrapped in rainbow Pride tape for their pregame warmups, but one player chose not to participate.

Flyers defenseman Ivan Provorov decided not to participate in pregame warmups, citing his Russian Orthodox religion as his reasoning for the decision when asked about the boycott after the game.

#Flyers Ivan Provorov on his Pride Night pregame boycott :
“My choice is to stay true to myself and my religion.” pic.twitter.com/YSFKvkyEJC

Flyers head coach John Tortorella discussed the situation following the game, detailing that the organization’s beliefs do not represent Proporov’s decision to sit out pregame warmups due to his religion.

“I think the organization has sent out a release regarding the beliefs that we have,” said Tortorella via Sam Carchidi of Philly Hockey Now. “It was really a great night. With Provy, he is being true to himself and to his religion. This has to do with his beliefs and his religion. That is one thing I respect about Provy, he is always true to himself, so that’s where we’re at with that.”

Torts says Provy didn’t take warmups because he was against Pride Night. He didn’t consider benching him. #Flyers pic.twitter.com/UlWUwQkuf9

Tortorella was then asked whether or not he considered benching Provorov for the game due to his decision to boycott pregame activities, which led him to defend his player from the obvious criticism heading his way.

“I just think it’s unfair. I know you are probably going to talk to Provy. I’m not going to spend a lot of time on it. I think it was a great night, and I’m not going to get too deep into the conversation.”

The organization’s statement that Tortorella referenced multiple times in his interview didn’t exactly mention Proporov’s decision, but rather offered their opinion on the pride night as a whole.

Statement from Flyers after Ivan Provorov did not warm up on Pride Night. The team wrote Pride Night jerseys in warmups. pic.twitter.com/uXksfMgnSp