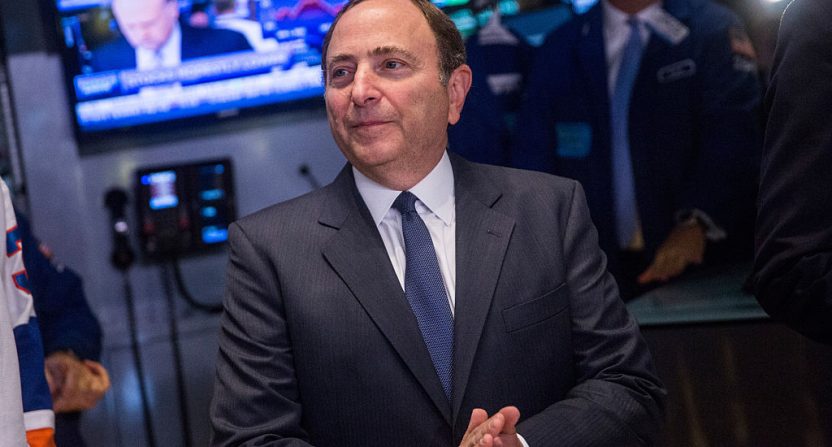 NHL commissioner Gary Bettman appears to be serious about getting the Arizona Coyotes out of Glendale.

Despite the Coyotes’ home being just 13 years old, plans have been considered to get Arizona’s NHL team to a different location in Arizona. Right now, this location appears to be Phoenix. And with a plan in the Arizona senate that would build an arena in the state’s capital, Bettman stepped in to try and help with a strongly-worded letter.

Here’s some of what the letter had to say:

“Let me be abundantly clear: The Coyotes’ current location in Glendale at Gila River River Arena is not economically capable of supporting a successful NHL franchise,” Bettman wrote, referring to the city’s 13-year-old facility it built specifically for the team, funded primarily by taxpayers.

“For the past 15 years, a succession of ownership groups and the League have tried everything imaginable to make the Glendale location financially sustainable,” the letter continues. “Our combined efforts all have yielded the same result — a consistent economic loss.

“The simple truth? The Arizona Coyotes must have a new arena location to succeed. The Coyotes cannot and will not remain in Glendale.“

LOL, NHL. Instead of trying to actually do something concrete, Bettman and the boys send a stern letter. Those are always so darn effective!

In all seriousness, the Coyotes’ arena situation is a serious deal. Though its arena is barely a teenager, Arizona is the third-least valuable NHL franchise in the league. This is partly due to the Coyotes playing in an area that’s hard for many to reach on a weekday night (thanks, traffic).

This poor arena situation has led Arizona to consider other options. While staying in the Valley of the Sun is the goal, there are plenty of places looking for an NHL franchise. There’s Seattle, Kansas City, and numerous cities in Canada.

Though there is a bill to move the Coyotes into a more fan-friendly area, the bill doesn’t look like it will pass through.

Unfortunately, this doesn’t look good for Arizona. Despite the Coyotes’ influence on hockey in the area (a growing area that has produced Auston Matthews and a new Div. I college program in Arizona State), it appears some serious work is going to have to be done to keep Arizona as a hockey market. If not, say hello to the Seattle Coyotes. Doesn’t that just roll of the tongue?