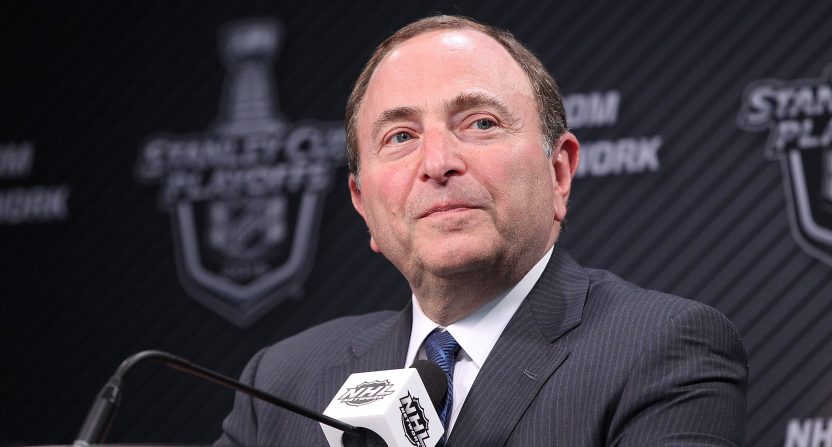 When the Winter Olympics come back in 2018, do not expect players from the National Hockey League to be stepping away from the NHL to compete for their respective nations. NHL commissioner Gary Bettman is saying the league might not participate in next year’s Games.

“As things stand now people should assume we are not going,” Bettman said, according to Reuters. “There are no negotiations ongoing. We were open to having discussions on a variety of things that might mitigate the damage to our season but that had no resonance.”

The NHL has been shutting down its league operations every four years since first allowing players to compete in the Olympics in 1998. At the time, the strategy was a wise one for the league as it promoted the game internationally like never before. For a league working to find ways to enhance its brand, getting some publicity out of the Olympics on a worldwide stage made sense.

But over the years, the impact the Olympics have had on the league’s standing remains minimal at best. As the years have gone by, players have appreciated the opportunity to compete for a gold medal, but the concerns over midseason injuries to key players and the two-and-half week break have become more and more of a nuisance for the league.

This has become more of an issue since 2006, when the Olympic format expanded to five preliminary games involving NHL players, as opposed to previous years when preliminary rounds were played without NHL players and the top six nations (USA, Canada, Russia, Finland, Sweden and Czech Republic).

The public pressure to allow NHL players to compete in the Olympics comes from the sport of basketball, but the NBA does not have the same conflicts as the NHL. That is because NBA players playing in the Summer Olympics does not interfere with the NBA’s regular season.

The NHL has also been inching to this decision in recent Olympic years by holding off as long as possible to decide whether or not it should allow players to compete in the Olympics. Now, the line appears to have been drawn, and Bettman is ready to move on.

One reason Bettman is prepared to remove the NHL influence from the Olympics is the league’s inability to market its participation to a point where it makes sense. Considering the NHL stops its season and allows $3.5 billion in player value to compete in the Olympics, the fact it can’t market the Winter Olympics on any of its platforms due to IOC rules is a major sticking point.

“We’re not negotiating publicly,” said Bettman. “The point is I was trying to emphasize the fact that this is terribly disruptive to our business and there seems to be no offsetting way to mitigate that disruption. I’ve suggested why don’t you treat us like a top sponsor.”

There is still time to have a change of heart for Bettman. The NHL didn’t decide to allow players to go to the 2014 Olympics until July 2013. The clock is ticking, but Bettman appears set in his ways.

“If they don’t value our participation, why are we going?” Bettman asks.

He has a point.