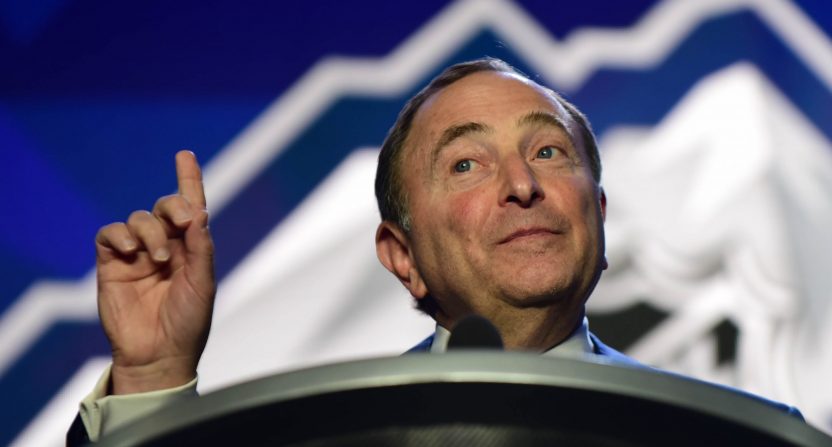 NHL commissioner Gary Bettman exuded some serious confidence about the paused season in a recent virtual town hall hosted by the San Jose Sharks. When the topic of cancelling the current NHL season inevitably came up, Bettman stressed it’s not something he’s even contemplating. Specifically, he said it would be “too easy” of a solution.

Bettman identified cities and states beginning to reopen as signs that sports will be able to resume in the near future. He added that “if we do the right things, I think we’ll be able to finish the season.”

Via The Mercury News:

“I believe that if the right time comes, and the right circumstances, based on all of the options that we’re considering and our ability to execute them, we’ll get this season done,” Bettman said. “I don’t want to sound Pollyanna, but canceling is too easy a solution. That means you stop working hard to do all of the things that we’re doing, and I ultimately believe that there will be an opportunity.”

Bettman said that he hopes fans will be back attending games by next season. He also suggested a potential November or December start to the 2020-21 season if necessary, “to conclude this season on some basis and to have a full regular season next year.”

“Obviously we hope to be playing in front of fans by next season,” Bettman said. “But if we finish in August or September, there’s no magic to starting in October anymore. We can start in November. We can start in December.

“You’re going to be a little flexible with the schedule, because we want to be able to bring the game back, both to conclude this season on some basis and to have a full regular season next year. If that means we need to be more flexible, then that’s what we’ll do.”

These latest comments from Bettman come as rumors keep swirling about a variety of different scenarios the league is reviewing. Some involve finishing out the regular season and playoffs in neutral locations, while another suggests the league could roll out a 24-team playoff tournament. No official timelines have been announced, but it has been stated the NHL has been looking at July and August.

Of course, finishing out the season falls into the easier said than done category. Bettman acknowledged that whatever the NHL decides has to be fair, and has to have integrity. The NHL must also keep the 2020-21 season in mind and minimize any future disruptions. Prioritizing the current season shouldn’t come at the cost of an intact future season.

Regardless of what happens, the 2019-20 season will always be figuratively marked with an asterisk due to its bizarre circumstances. There are already a ton of what-ifs being asked by teams on the bubble, teams that had injuries who are healthy now, and teams who were halted just as they were picking up steam. We’ll never know how things would have played out if the season wasn’t paused. But, Bettman sounds intent to make sure we get at least some sort of conclusion to this bizarre year.