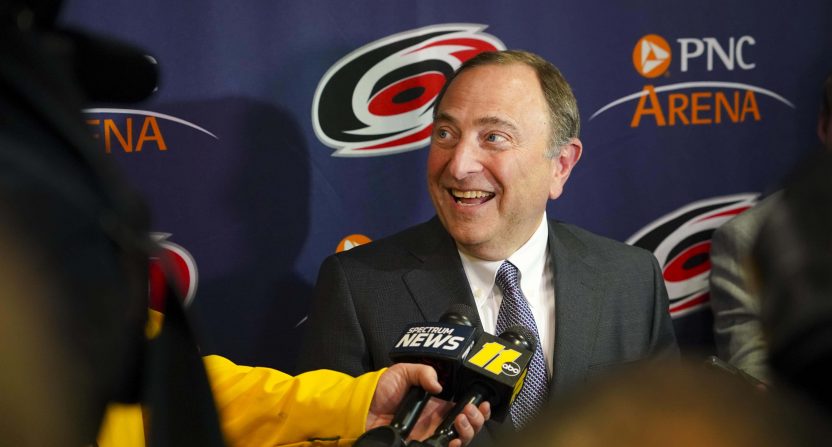 The Carolina Hurricanes have created a ton of buzz in the NHL this season through their strong play and emergence as a contender in the Eastern Conference. That being said, they’ve arguably garnered more attention for their post-game victory celebrations, called the Storm Surge. Everyone has had an opinion on the celebrations, but what does NHL commissioner Gary Bettman think?

In case you haven’t seen it, the Storm Surge has taken on many forms following home victories, beginning with a Skol chant that transforms into any number of things like Duck, Duck, Goose and even a limbo.

The celebrations have led to one particularly cranky hockey analyst, Don Cherry, to label the team as “a bunch of jerks” due to their childish antics. The Hurricanes responded with t-shirts and a “Bunch of Jerks” celebration.

Everyone has had an opinion on the celebrations, but Bettman may have summed up things the best and did a great job discounting Cherry’s take.

When asked, Bettman perfectly explained why he doesn’t mind the Hurricanes having some fun with their fans following a win. It’s a lengthy quote that’s worth your time.

“I happened to talk to some of the players this morning about it, and we had a fun conversation. The players enjoy doing it. That’s important. The fans enjoy seeing it. To me, that’s the most important element as to what goes on after a game when there’s a win. I consider Don Cherry a friend, and respect him, but we can agree to disagree on certain things. The fact is, how fanbases connect with our game evolves over time. What might work in an Original 5 city, might not work in a city or market that’s newer to the game. Think back to the Mighty Ducks of Anaheim on Opening Night and Wild Wing propelling from the rafters. People said, ‘Oh, my. How could you do that?’ Think about Nashville with the chants and rituals they have and involving country music. That’s different. Think about what goes on now in Las Vegas. What each team does to connect with its fans is going to be tailored for their fans and their market. As long as the people involved are feeling good about, then who’s to complain?”

Summarized, Bettman acknowledges that the fans enjoy the celebrations and it’s important for teams to connect to their fanbases. What might connect will differ depending on the franchise, so it’s silly to complain about what’s working for a specific city. Personality isn’t a bad thing in hockey. That’s something fans need to remember as well as they often will criticize the fun other fans are having. If it’s not harming anyone, who cares?

The NHL has built up a reputation as a league that will occasionally stifle a player’s individuality. That may be the fault of the media more than anything else as certain cities are known for pushing stories that seemingly squash the personality out of a player like P.K. Subban. Unique voices and personalities add to hockey and can only grow its larger appeal. Consider the Hurricanes and their celebrations that has everyone, including this website, talking about them. That’s important for a franchise that is constantly trying to find its footing.

Ultimately, it’s easy to celebrate Bettman’s comments as they finally align with common sense. Perhaps that’s why they are so surprising. Bettman’s tenure as the head of the NHL has grown to the league to unprecedented proportions. He deserves a huge amount of praise for positioning the NHL in an avenue of financial success. However, it’s difficult to heap too much praise in his direction as many of his decisions, including three work stoppages and skipping the Olympics, have flown directly in the face of the fans. That’s difficult to ignore and forgive.

Comments like the one below will always drown out the positives.

Is he not aware of what’s happening in Ottawa and what happens on nearly an annual basis in Arizona? Or the major attendance concerns with the Florida Panthers? Comments suggesting that everything is fine alienate fans who feel that their franchise is being mishandled.

The pro-celebration Bettman is the one we wish hockey fans could see on a more regular basis.