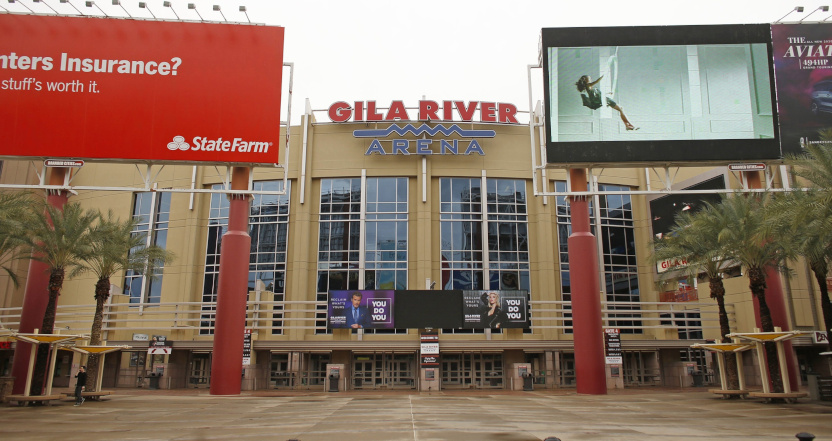 Much of the discourse around public funding of sports stadiums and arenas is about the idea of a professional team as an “anchor tenant,” incentivizing development around the arena and benefiting the local area through food and beverage sales, hotel stays, and more. Said arenas often also wind up used for concerts, conventions, and other large events, but those are usually seen as ancillary compared to the “anchor tenant” professional team, which leads to arenas being built in hopes of enticing professional teams, professional teams demanding (and getting) substantial public funding for new arenas and arena upgrades, and more. The city of Glendale, Arizona is proposing a different model for Gila River Arena (home to the NHL’s Arizona Coyotes for the past 18 years), though, telling the team they can only stay there for the 2021-22 season because the city can make more money without them from concerts and other events. In effect, Glendale’s response to the idea of an “anchor tenant” being necessary for an arena can be summed up in a GIF:

There is, of course, some background to this. The Coyotes have played on a year-to-year lease at the arena since 2016, and have expressed frequent desires to move elsewhere in the area. And they’ve received NHL support for that idea, with league commissioner Gary Bettman saying in a letter to the Arizona legislature in March that the Coyotes “cannot and will not remain in Glendale” and adding in a different statement that Glendale is “not economically capable of supporting an NHL franchise.” Most recently, they’ve been looking at relocating to land owned by the city of Tempe,  with the Arizona Republic reporting that news last month.

Beyond that, as per Katie Strang of The Athletic, Glendale “agreed to forgo a significant amount of the money owed to the arena” last year due to the pandemic. That deal was made under the condition the Coyotes “keep current with all future financial obligations under their lease agreement,” but a letter from Glendale city manager Kevin Phelps to the team last month said “That has not occurred,”  citing a debt of $1,462,792 with more than $300,000 of that “over four months delinquent.” However, in comments to the Republic‘s Joshua Bowling, Phelps wasn’t particularly concerned about the Coyotes’ Tempe actions or their past-due balance, instead saying that the eviction here is about filling the arena with events that will be better for the surrounding area.

Phelps said his decision is not about the team’s interest in Tempe. He said he wants to take the arena in a different direction, including millions in renovations to pack the venue year-round with “more impactful” events. This is in the best interest of Glendale and the Westgate Entertainment District that developed around the city-owned arena, he said.

“I don’t think the Coyotes have ever felt at home in Glendale,” Phelps said.

He said the decision “was not made overnight or in a vacuum.” The city manager said he got input from the City Council, the arena management company and others. He pointed to data showing that events like concerts would be more lucrative for the entertainment area near Loop 101 and Glendale Avenue than professional hockey has been.

The city hired Applied Economics, a Phoenix-based economic consulting firm, to analyze tax collections from events at the arena. A draft of the report reviewed by The Arizona Republic says hockey game-goers typically spend more money inside the arena, while concertgoers tend to spend more on retail and dining at Westgate.

Phelps said he was “somewhat hopeful” for a long-term deal even after the Tempe news broke. But, after seeing the economics report, he said he doesn’t think there’s anything the team could offer that would change his mind.

Strang has more detail from that report:

Phelps said the Tempe announcement was not the impetus for the decision to terminate the agreement with the Coyotes. Instead, the city is seeking a long-term strategy that is financially viable and beneficial to Glendale. Recently, the city requested a study to identify the impact of monthly sales tax collections for retail, restaurants, bars and hotels within the Westgate Entertainment District from attendees at Coyotes home games versus other live events. According to that economic-impact study, which was reviewed by The Athletic, “it would take approximately 20 additional concerts or large other events (with attendance of 10,000+) to equal the same amount of sales tax revenues to the city as 43 Coyotes games” in spending at the Westgate Entertainment District (outside the arena).

“What we think is not being tethered to the Coyotes really allows us to take the asset of the arena and do something really special with it,” Phelps said.

As per Bowling, that report says “concertgoers spend $58 at Westgate, while hockey fans spend $28 at Westgate,” and “the large number of (hockey) events also means that fans are likely to spend less per event than concert or other event attendees, for whom the concert or other event represents an infrequent special activity.” And the latter is an interesting argument that might have some relevance to arena discussions elsewhere. There are all sorts of other things worth discussion here, of course, including where the Coyotes will play in 2022-23 and beyond, but perhaps the most notable for a wider sports audience is around the idea of pro teams as an “anchor tenant.”

A key part of professional sports is the idea of a season ticket base, people who will buy tickets to every home game the team plays and either attend themselves or pass or sell on those tickets. That’s also a thing for some theaters, but it’s not really a thing for most arena-level concerts. So there are seemingly more distinct people who will attend a concert schedule than a hockey schedule, even if that concert schedule has less dates overall. And it’s definitely possible to see the argument that more distinct people attending less frequent events means they’ll combine those events with pre- or post-show dinners or drinks in the surrounding area, as compared to hockey season ticket holders just looking to get to the game and get home after the game.

Beyond that, there are seemingly other advantages for an arena without an “anchor tenant.” Sports teams in that role generally have top priority for their league-set home game schedule, which sometimes causes arenas to pass up on big tours if the dates the band is near that area don’t work out, or to pass up on big conventions if a home game gets in the way of part of the convention. A concert- and convention-first arena wouldn’t have those issues, and could seemingly take its pick of non-sports events.

And on that front, it’s worth remembering that the nearby city of Phoenix is the fifth-largest U.S. city by population. Traffic and congestion means it’s not always easy for those in Phoenix proper to get to Glendale events, but that’s again something that’s easier for a special-event concert than a regular home hockey game. And the size of Phoenix means that top-tier bands are absolutely looking for dates in the area. Of course, there are other area arenas and stadiums providing booking competition, including the Suns’ Footprint Center (in Phoenix proper), the Diamondbacks’ Chase Field (likewise), the Cardinals’ State Farm Stadium (like Gila River Arena, it’s in Glendale), and Arizona State’s Sun Devil Stadium (in Tempe). But a concert-first strategy may make more sense for Gila River Arena than it would for arenas in smaller areas.

Of course, the specific context of the Coyotes’ franchise also needs to be kept in mind with all of this. This is a team that filed for bankruptcy in 2009 and has been sold twice since then. It’s a team that hasn’t paid its current debts, as per the Strang-cited letter above, and it’s a team that has turned down Glendale’s requests to commit to a long-term lease (including one last September) and has regularly looked to move elsewhere in the area. It’s also a team that has often had lower attendance numbers relative to much of the NHL.

So that doesn’t mean that the Glendale approach of looking to abandon an “anchor tenant” in favor of more concerts and other events can necessarily be replicated elsewhere. And it’s worth keeping in mind that just saying the Coyotes’ local economic impact can be duplicated with “20 additional concerts or large other events (with attendance of 10,000+)” doesn’t mean the arena will actually be able to book that amount of events that will draw that much. And it’s worth keeping in mind that there seem to be some reasons here for Glendale to end this lease that go beyond the purely economic, including the uncertain future with and uncertain payments from the Coyotes (even if Phelps isn’t currently citing those factors).

But even with all that said, it’s fascinating to see an arena claiming they can do better without a professional sports team. And if this move goes ahead as Glendale plans (and Phelps told Strang “We’ve made our decision. There’s not a scenario I can envision today that would have us open that door back up”), and if the economic impact as they project it will, this could become an important case study for those looking to minimize or stop public subsidies for professional sports teams. If Glendale and Gila River Arena can really do better without a pro sports team as an “anchor tenant,” that may call into question a lot of the assumptions those subsidies are based on.