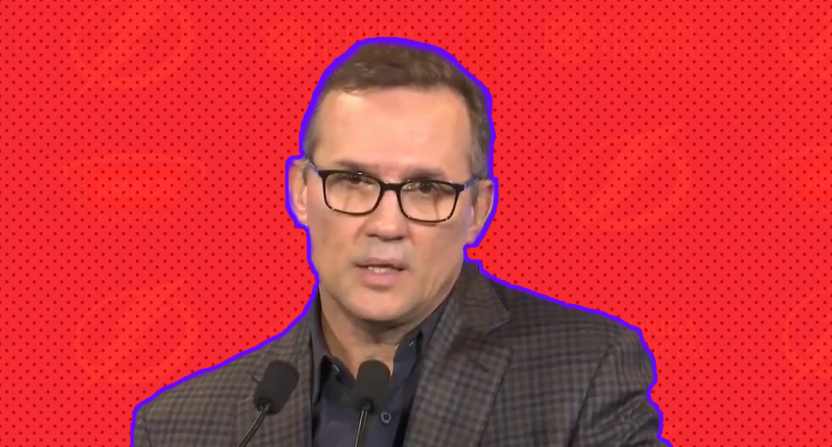 In a stunning announcement Tuesday afternoon, reports (later confirmed by multiple sources) came out that Steve Yzerman was stepping down as general manager of the Tampa Bay Lightning. Long-time assistant GM Julien Brisebois will step in as the team’s new GM.

BREAKING: Steve Yzerman told #TBLightning players in a meeting today he’s stepping aside as GM to be in advisory role, per source. BriseBois taking over as GM.

According to Bob McKenzie of TSN.ca, Yzerman will remain with the organization for the last year of his contract as a senior advisor.

It’s shocking news, as Yzerman had established himself with the Lightning as one of the best general managers in the NHL. Hired as GM back in 2010, Yzerman has built a perennial Stanley Cup contender. His Lightning teams made the playoffs five times, reaching the Stanley Cup Final in 2014-15 – the same season he won GM of the Year.

Yzerman’s ability to draft and develop homegrown talent was paralleled by few in the league. During his tenure, he snagged all-star Nikita Kucherov in the second round (2011), Ondrej Palat in the seventh round (2011), Brayden Point in the third round (2014) and a handful of useful rotation players across the board.

At the same time, Yzerman wasn’t afraid of making big trades. He traded Cory Conacher, a rookie of the year candidate at the time, for starting goalie Ben Bishop – who helped the team on their Final run. Yzerman traded longtime star Martin St. Louis for Ryan Callahan. In 2017-18, he started off the season dealing the talented, but problematic, Jonathan Drouin to the Montreal Canadiens for Mikhail Sergachev. At the deadline, he sent three players and two picks to acquire defenseman Ryan McDonagh and J.T. Miller. His moves didn’t always work out, but Yzerman’s had one of the best trade records in the league.

Yzerman’s ability to retain talent also deserves mention. He’s signed stars Steven Stamkos, Nikita Kucherov, Victor Hedman and Ryan McDonagh to long-term deals while keeping his surrounding core either locked up (Tyler Johnson, Palat) or constantly changing. For the most part, he kept the money flowing at the top and didn’t commit too much to depth.

So, why leave the Lightning now at the height of their power? Well, it’s not exactly clear. Besides winning the Cup, he’s accomplished practically everything he could as GM. It does seem a return to Detroit – where he’s beloved as one of the greatest players in franchise history – isn’t a bad bet. The rumor is further fueled by reports Yzerman told players he was going home.

Yzerman has brought the Lightning to atop the league under his run with the team, so perhaps it’s as simple as wanting a new challenge. Detroit would certainly represent that, as the team is mired in cap hell with few future assets. If Yzerman joined the team and put them on the right path, they’d put a statue up of him up immediately, even if he’s already deserving of one.

Timing is the odd factor here. Yzerman participated in Tampa Bay’s offseason and draft, and seemed committed to the franchise long-term. He’s even watched as the Red Wings signed GM Ken Holland to a two-year extension. Waiting it out for Detroit after what’s sure to be a dismal season while sticking around through the end of his Lightning contract is at the very least honorable.

Regardless, it’s crazy to think Yzerman is now a free agent GM. Every single team with an opening (Seattle, anyone?) will be blowing up his phone to see if they can get a meeting. But, from everything that’s being reported, it appears he’s bound for Detroit, eventually. It would be a fitting new chapter for the Red Wings great.