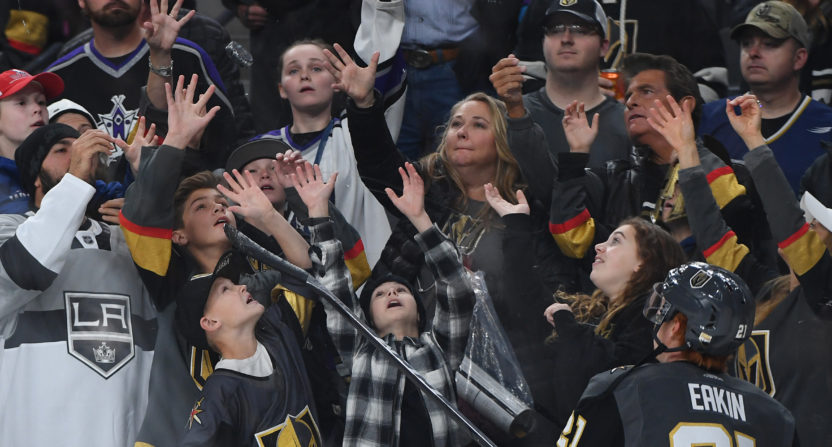 The Vegas Golden Knights are taking a proactive approach to combat professional autograph collectors and sellers. In an effort to control some of the traffic around the team’s practice facility and parking lot, the Golden Knights will only allow children under the ages of 14 to ask players for an autograph.

The Golden Knights are learning in a hurry that success breeds attention and big crowds. For example, check out the photo below of fans trying their hardest to take in a Golden Knights practice on a Friday afternoon.

It after 4 p.m. on a Friday in Vegas. But it’s the Golden Knights’ first practice after their break, and it’s so packed fans are standing on benches to peer through the windows. pic.twitter.com/y5DtSG7S2N

The team’s success on the ice combined with the large fan attention has brought out some of the most annoying, most despicable people in sports – professional autograph seekers. We’re not saying they’re all horrible people, but they do have a reputation of ruining experiences for younger fans just to make a buck. As a result, the Golden Knights are kicking them to the curb.

Camping out by the parking lot is no longer allowed. In addition, fans can only receive autographs inside the rink in a designated area by the player benches. There is an age restriction, too: Only those 14 and under are allowed access to the players.

The changes sound good in theory, but how does the team plan to enforce the new age restriction? It’s not like you can ask a 14-year-old, or someone even younger, for their identification. Problems will surely arise when an adult-looking 12-year-old is turned away for an autograph.

Bubolz detailed that the professional autograph seekers were making their agenda a top priority, pushing kids out of the way while also creating safety concerns for everyone trying to get something signed.

“What I saw, honestly, I saw adults at times pushing kids out of the way, and that’s just not how we’re wired. On the exterior of the building we had to change that process too. Guys were stopping, as they always do, and it was creating a safety hazard. We saw kids running into the street and we just couldn’t have an incident like that take place so we had to change that process as well.”

Autographs are a polarizing topic in sports. The Golden Knights will be commended by those who think autographs should be for young fans, but other adult fans who idolize autographs will surely voice their displeasure. It’ll be interesting to follow how this plays out over the next few weeks.

“So far, we’re about five practices in and it’s worked much better. I see lots of kids. I see lots of smiles. I’ve seen lots of parents say ‘Thank you’ for making it a better process.”

For what it’s worth, the Golden Knights are following an approach that’s already seen in golf.

The solution to cutting down on professional autograph seekers may not be perfect, but it’s a good start. Will other NHL teams follow?