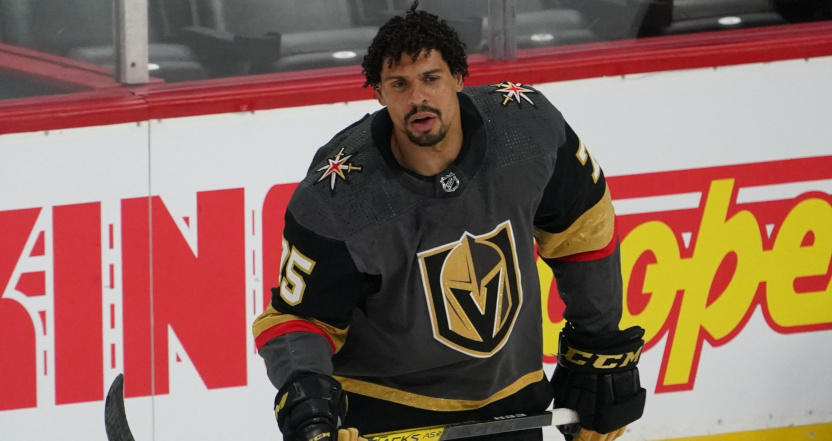 A large issue many players, coaches, and fans have with the NHL league office at the moment is with seeming inconsistency in punishments from the Department of Player Safety. The latest one many are complaining about is the decision handed down Monday about Vegas Golden Knights’ forward Ryan Reaves.

With the Golden Knights trailing the Colorado Avalanche 6-1 with 10 minutes left to play in Game 1 of their West Division final Sunday night, Reaves (seen above ahead of a March 25 game against Colorado)  cross-checked Avalanche goalie Philipp Grubauer in the head, then punched Colorado defenseman Ryan Graves in the back of the head, drove Graves to the ice, forced his head into the ice further, and pulled out some of his hair. That led to a game misconduct for Reaves for intent to injure, and also led to a line brawl, and led to the game ending with a remarkable nine-minute power play for the Avalanche, who would go on to win 7-1. And it’s now produced a two-game suspension for Reaves from the Department of Player Safety.

How did the department come up with that suspension length? Well, their logic, which includes that this is deserving of more than just the penalty Graves got because of the retaliation aspect and because of some of Reaves’ past actions (he’s been fined twice and suspended twice, most recently for one game in September 2020 for a check to the head of Vancouver’s Tyler Motte), is in the video below. That video also shows Reaves’ actions:

What’s interesting here is that the video repeatedly emphasizes the severity of Reaves’ actions and how those, combined with the in-game retaliation and his past history, make this deserving of supplemental discipline. But then the discipline really isn’t all that substantial.

Yes, missing two playoff games isn’t insignificant. And it’s notable that there have been some questionable recent acts by repeat offenders that didn’t even see suspensions. One example of that came earlier this month during the regular season, when the Washington Capitals’ Tom Wilson drew only a fine for punching the New York Rangers’ Pavel Buchnevich while he was on the ice and flinging Artemi Panarin down by his hair, which led to the Rangers putting out a remarkable statement calling for the job of NHL VP and head of player safety George Parros, a statement the team president and GM (who were both shortly fired) both sought to distance themselves from. And that led to a bunch of further brawls in the next Rangers-Capitals game, and to Buchnevich being suspended for one game for a high stick, and to the Rangers being fined $250,000. So Reaves’ punishment is much more severe than anything handed down there, and his actions do bear some similarity to Wilson’s.

But two games feels awfully light for this given how dangerous Reaves’ actions were, particularly when it comes to using his weight against a player already on the ice, and when it comes to pulling out hair. An intent to injure penalty is no joke, coming with an automatic ejection and a player safety hearing, so having that applied here shows this was significant. And plenty on the Avalanche side likely will think the ruling here is way too light and way too inconsistent, considering that their own Nazem Kadri is in the middle of an eight-game suspension for an elbow to the head of St. Louis Blues’ defenseman Justin Faulk in the first round (a suspension just upheld by NHL commissioner Gary Bettman on appeal; it now may go to an independent arbitrator if Kadri appeals further).

It seems a little odd to have two players from different teams suspended for dangerous plays involving blows to opponents’ heads, with their past histories cited in both cases, but for one suspension to be four times the length of the other one. And that’s especially true considering that Kadri’s blow to the head happened during the run of play and Reaves’ actions happened after the whistle. And that’s really what’s at the heart of many of the current criticisms of the Department of Player Safety.

If that department was consistently light or consistently heavy with their punishments, that would still have its issues, but it would be more acceptable for many. If long suspensions are going to be handed out every time there are dangerous blows to the head of an opponent from a player with a history of suspensions, well, that’s going to lead to less of those blows. But instead, we get situations like Wilson’s, Reaves’, and Kadri’s that seem to have lots of crossover in what happened and even in how the department describes it in their videos, but that wind up with vastly different punishments. The seeming lack of consistency is a big problem, and it’s one that should be addressed.