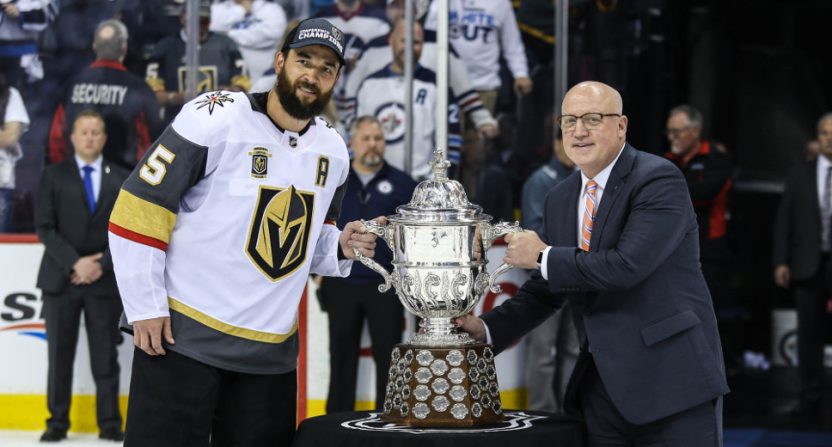 The Vegas Golden Knights’ remarkable run through the playoffs continued with a 2-1 win over the Winnipeg Jets Sunday, giving them a 4-1 series victory in the Western Conference Final and sending them to the Stanley Cup Final. They became the third NHL team to ever reach the Stanley Cup Final in their first season, but their accomplishment stands alone, as the 1967 St. Louis Blues only had to play other expansion teams ahead of the final and the 1918 Toronto Arenas were mostly expansion only in name, using plenty of players from their predecessor Toronto Blueshirts. In fact the Golden Knights’ run might be the most impressive accomplishment for an expansion team ever, and it certainly looks like the best from the four largest North American sports. But there’s one group in Vegas that may not be all that happy about this, and that’s the sports books.

The Golden Knights were incredible longshots to win the Stanley Cup going into this season, with preseason odds as high as 500-1 in some books. And those odds saw some takers. Jeff Sherman, the manager of the Westgate LV Superbook, tweeted Sunday that his book has 13 outstanding tickets at that line:

David Montero of The Los Angeles Times wrote an interesting piece on this last month, complete with plenty of quotes from bookmakers:

Tony Miller, director of the race and sports book at the Golden Nugget, said his heart is with the expansion National Hockey League team, which made the playoffs in its first season and begins its run at the Stanley Cup on Wednesday against the Los Angeles Kings.

His head, however, is with the bottom line.

“If they win the Stanley Cup, it will be devastating,” Miller said.

…Bob Scucci, director of race and sports books at Boyd Gaming, said they anticipated heavier wagering locally on the Golden Knights and offered early on at 150 to 1. He said if the Golden Knights had been an expansion team in another city, the odds would’ve been closer to 300 to 1.

He said they have a few tickets that have $30,000 payouts if the team wins the Stanley Cup — and a lot of smaller wagers. He said this season has been the highest handle on NHL wagering that he’s seen in his 27 years working in oddsmaking.

Of course, the Golden Knights haven’t won the Cup yet, and while they’re expected to be favorites if they face the Washington Capitals, they’ll be underdogs if they take on the Tampa Bay Lightning. And this isn’t necessarily going to be disastrous for the books even if the Golden Knights win, as one bookmaker told Montero the losses there would be “comparable to a very bad NFL Sunday”; that’s certainly not great, but we’re not talking apocalyptic.

But the Golden Knights’ wins so far have already cost the books, with a whole lot of people betting on them thanks to their local connection. And this year’s Super Bowl also didn’t work out well for many books, with a whole lot of payouts on the underdog Eagles. It now looks like the Stanley Cup Final could prove pretty costly too. While there will be plenty in Vegas rooting for the Golden Knights, many at the sports books may be less than thrilled with their progress.