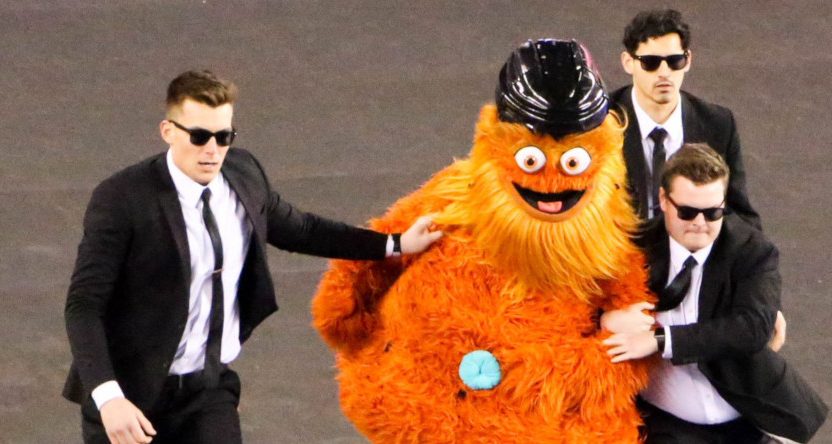 There’s quite the NHL controversy out there thanks to the actions of wildly-beloved Philadelphia Flyers’ mascot Gritty. Gritty has been known for plenty of past shenanigans, and those continued in Saturday’s Stadium Series game against the Pittsburgh Penguins at Philadelphia’s Lincoln Financial Field, with an aerial entrance and a later streaking run. But other NHL mascots weren’t thrilled, with the Los Angeles Kings’ Bailey saying on Twitter that mascots had previously been kept off the Stadium Series field, and the San Jose Sharks’ Sharkie joining the complaints. First, some Gritty highlights, starting with a lit-up Gritty swinging onto the ice ahead of the start of the game:

Gritty later went streaking, and got collared by security:

I’ve since been ejected. pic.twitter.com/6ims2CQpsc

And the Flyers even got in on some memes:

This is the ideal Grit body. You may not like it, but this is what peak performance looks like. #StadiumSeries pic.twitter.com/Lkn4JEQvvI

But other mascots weren’t thrilled with the antics, starting with Kings’ lion Bailey:

Hey @nhl every stadium series before this the mascots we NOT ALLOWED to be ANYWHERE near the field… so did Gritty not follow the rules or does he get special privileges? #AskingFor28

@BaileyLAKings. You know from all star that the rules dont apply to him …… 😉

Sadly, there doesn’t appear to have been any official commentary from Penguins’ mascot Iceburgh. But NHL Network did spotlight the Gritty-Iceburgh rivalry in a tweet earlier Saturday:

At any rate, the Flyers managed to score two late goals with their goalie pulled to send this one to overtime, then won it 4-3 in the extra frame on a goal from Claude Giroux. Who, as many have noted, now looks like a slightly-less-hairy version of Gritty:

So … Gritty is the fully evolved form of Claude Giroux?

So it was indeed a Gritty night. Objections from other mascots notwithstanding.