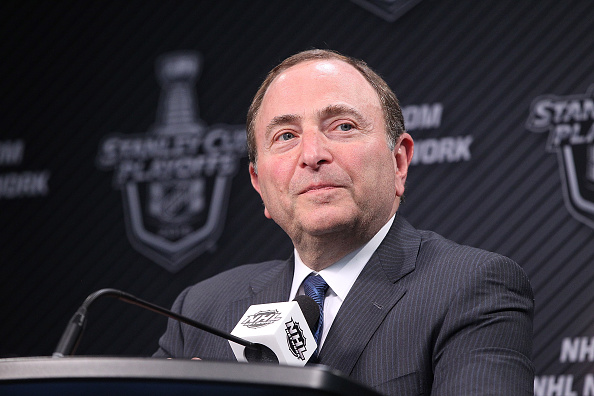 Sports betting and sports gambling has gone from almost entirely taboo and something that was talked about in hushed tones, to a topic far more open and nuanced, and one that has evolved dramatically over the years. That’s especially the case now that there’s a professional team in Las Vegas with the potential of more coming.

The commissioners of the four major pro leagues in the United States have been evolving on sports betting, especially in the NBA’s case. Adam Silver is an avowed champion of legalized sports betting, when just a few years prior his league tried successfully to prevent New Jersey from opening sports books. Has Gary Bettman’s stance evolved too, thanks to his league’s move into Las Vegas?

Gary Bettman recently spoke to Bloomberg’s Surveillance podcast, where he talked about bringing the league to Las Vegas, which not so many years ago was anathema thanks largely to sports gambling and the murky haze it hangs over sports in the town. His answer about sports gambling with regards to his sport though is a fascinating one:

“Gambling, for us, is probably an entirely different focus than, say, football or basketball, either at the pro or at the college level. We’re about one percent of the book. Our game doesn’t lend itself to gambling in the same way that football and basketball do,” Bettman said.

Betting on hockey is incredibly complicated because of the lack of scoring, or a spread, or anything easily recognizable to the crowd that largely bets on football, basketball and horse racing on sites such as www.superbettingsites.com. According to Legal Sports Report, NHL bets count for about four percent of all sports wagers at Las Vegas sports books, backing up this theory. But that’s with traditional gambling, not the new and ever growing daily fantasy, which is a much cleaner way to bet on hockey. And with that, Bettman made this statement on daily fantasy (the league has a stake in DraftKings):

“You’re assuming that daily fantasy sports is the same as gambling,” Bettman told Bloomberg, when asked about “profiting from gambling” as a league.

In 2012, he strongly supported the continuation of Professional and Amateur Sports Protection Act, which prevents sports betting from beyond the few states its already legal in. By 2014, he told Rachel Nichols that attention had to be paid to what the newer generation thinks of sports betting, in conjunction with talking about the viability of Las Vegas as an expansion market. By last year, when it was incredibly evident that Vegas was getting a team sooner rather than later, Bettman again stressed at how his sport is harder to bet on than football, basketball, etc., and his deputy Bill Daly talked about how he doesn’t want the atmosphere at Las Vegas (Insert Clever Adjective Here) Knights games to be only people wanting their bets to cash out.

So while there are concerns about integrity with regards to Vegas games because of proximity, there is one thing clear here: Bettman’s stance on sports betting has evolved ever-so-slightly as his league drops its interests into more places, such as daily fantasy sports and a Las Vegas franchise.

While Adam Silver and the NBA’s much talked about views on legalized sports gambling gets press, Bettman’s changes have been more subtle, and maybe even more telling.