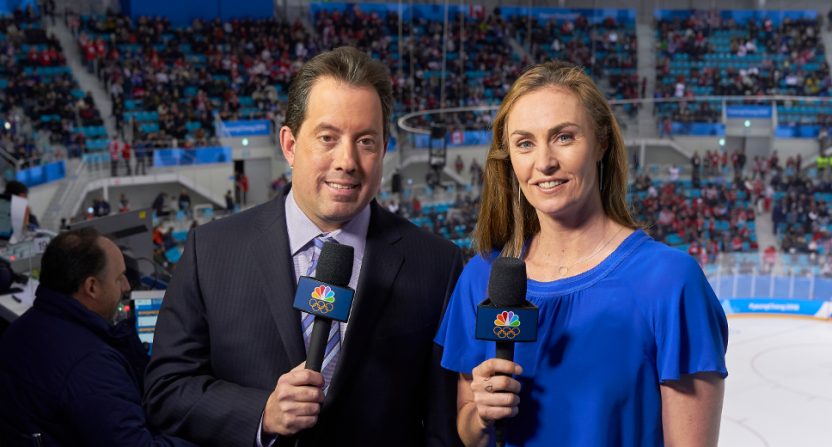 If you’ve been watching the Nashville Predators vs. Winnipeg Jets series on NBCSN during these NHL playoffs, you have probably noticed that something sounds a little different. That’s because this season, NBC has added a woman to their broadcast team.

AJ Mleczko, a former US Women’s Hockey player who won gold and silver medals at the 1998 and 2002 Winter Games respectively, has become the first woman to be in the booth for NHL playoff games (networks have previously used women as rink-side reporters, but never in the booth). To say she’s been doing a good job would be a massive understatement.

Perhaps the greatest barometer of how well Mleczko has been doing in the booth is the simple fact that no one is even complaining about a woman broadcasting a men’s sport. And it’s not just any sport, but some of that sports’s biggest games of the season.

This is a fantastic turn of events. As a society, we are certainly not perfect, but to be able to have fans hear a different voice when they turn on a playoff game, and not pay attention to whether it’s coming from a man or a woman, is certainly a step in the right direction.

There is an old belief in sports media that fans, who are predominantly men, don’t want to hear their sports analysis come from a woman. This shouldn’t come as a surprise as the higher ups in sports media tend to be very conservative with their broadcasting decisions, and they don’t want to take risks. When it comes to broadcasting, nearly every crew consists of someone with a broadcasting background and an analyst who either played or coached that particular sport. It’s the safe play.

AJ Mleczko is tearing down those beliefs. She’s just the latest line of proof that fans don’t care whether their analysis is coming from a man or a woman, they just care that the person has talent. Hell, it doesn’t even matter if the announcer played the sport or not. Didn’t Tony Romo just show us that anyone who’s been out of the sport for more than about three years can’t really fall back on that experience anymore?

Mleczko will never be able to talk about her experience playing in a seven game series in the Stanley Cup playoffs, or what is going through the heads of the players late in a Game 6 because she never played in the NHL. Guess what? That’s fine.

What she can do is talk about hockey and the little intricacies of the game. She’s currently paired with former goaltender Brian Boucher, who is stationed Inside The Glass for NBCSN. As a former goalie, Boucher has great insight into what a goalie sees when a shooter is coming down the ice, while Mleczko, who was a forward, can tell you what the forward sees in the goalie. It’s a dynamic that has worked very well so far, and Boucher praised Mleczko earlier this week.

Most importantly, when Mleczko speaks, she sounds natural. That’s really what fans care about. Soccer fans all remember Fox’s Gus Johnson experiment. Johnson’s undoing wasn’t that he was American (there are plenty of good American soccer announcers), it was that he didn’t sound like he should be calling soccer game. To be honest, I’d argue the same thing about John Strong and European soccer games. On the flip side, this past year, the NHL Network handed their World Junior Championships play-by-play duty to Paul Severino, a man with no hockey background, but with each broadcast, it was clear how eager he was to learn more about the game, and in turn he sounded like a seasoned vet.

In the year 2018, most networks are much more cognizant of having a more diversified lineup with their broadcasters. But that also runs the risk of being diverse just for diversity’s sake, which doesn’t help.

This summer, Aly Wagner will become the first woman to call Men’s World Cup matches on American TV, a decision that has not been met positively by soccer fans. The outrage has nothing to do with Wagner being a woman, it’s simply because many fans feel that she isn’t a good analyst, and she joins the many men Fox has who fans also don’t think are good analysts.

If you heard Mleczko’s coverage of Women’s hockey at the 2018 Winter Olympics, it’s no surprise she was given this gig. What’s even better, NBC has recognized her talent and will be putting her into the rotation for their NHL coverage next season.

Eventually, networks will stop looking at whether a broadcaster is a male or a female when deciding who should call their big games. Those decisions will be based on talent and talent alone. The fact that NBC was able to assign a woman to cover major NHL playoff games for them and it wasn’t even a story? Well, that just means we’re getting closer to that time.