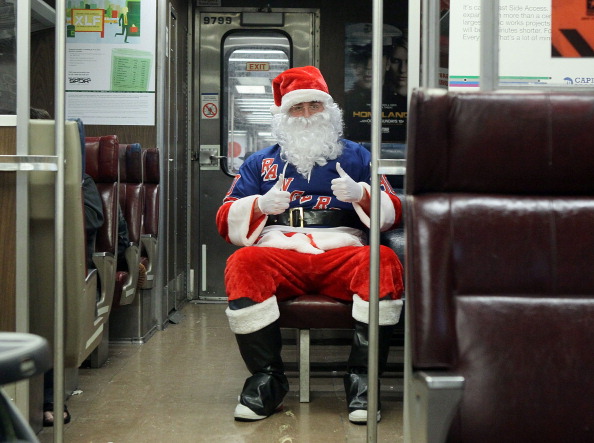 The holidays are in full swing, and it’s time for the gift that keeps on giving: The Comeback’s weekly hockey mailbag!

1. What is your ideal NHL schedule? I’ve seen you say that there are a lot of games that don’t need to happen during the season between teams from other conferences. Would you shorten the season? Everyone loved the 48-game season so should that be the new schedule?

Let’s forget the idea of shortening the season. Whether it’s 48 games or 70 games, it’s never going to happen. Asking the NHL to throw away 12 games for each team would mean asking the league to throw away millions of dollars, and the only time it’s willing to do that is when it wants to break the players union and create a new CBA.

The idea that every team faces every team in the other conference twice is silly. It only exists because owners wanted that Sidney Crosby gate in their building. That’s nice but it leaves so many extraneous games between teams with no history, rivalry or reason to see each other twice in six months.

There’s no reason Edmonton/Florida or Carolina/Vancouver or New Jersey/San Jose or Winnipeg/Boston has to happen more than once a season.

It’s torture watching local broadcasts sell games like this. “Tonight here in Glendale, it’s a homecoming of sorts for Kyle Turris, who made an exodus from the desert to Ontario in 2011! Will the Coyotes offer him a rude welcome? Or will Turris drive over his former team? Senators! Coyotes! Next!”

Here’s how the NHL schedule will look when I become commissioner, hopefully before the start of next season:

East plays the West once per season; that’s 14 games for the East and 16 games for the West. The location of these games rotates every year.

The other 68 games for the East are broken down this way:

The other 66 games for the West are broken down this way:

If the asymmetrical nature of the schedule upsets you, realize it’s asymmetrical already. This way, playoff teams are decided more by games within the division and conference, which seems fairer. Those 3/4 extra games in each conference can be decided via the previous year’s standings. Travel costs would go down, and what owner wouldn’t want that?

Plus, and this may be the best part of the whole thing, there would no longer be a reason for NBCSN to air “rivalry” games between teams that aren’t rivals. I like Liam McHugh, so I don’t like him having to pretend Detroit and Washington have a rivalry.

The NFL doesn’t require everyone to play everyone, although that’s mostly because players would literally die if they had to play 31 games. MLB doesn’t need every team to appear in every stadium and they play approximately 5,000 games per season. The NHL, despite its best efforts, is still a niche league, and the current schedule structure isn’t doing fans any favors.

Also, if the math on that schedule doesn’t add properly, that’s why I probably shouldn’t be NHL commissioner.

@davelozo who's dumb enough to take Girardi and that he'll wave his ntc for?

I get a lot of Rangers questions, because I used to write about the Rangers a lot, but I try to avoid making this a Rangers-centric mailbag every week. Most people reading this do not care to read opinions about the usage of Tanner Glass and how moving Kevin Hayes from center to wing results in ripple effects throughout the lineup.

The contract of Dan Girardi, however, is a source of universal interest.

Girardi has logged a lot of minutes, absorbed a lot of punishment in his career and doesn’t figure to get better over the life of that contract. His mobility was never great and that’s slipped too. To make matters worse, the Rangers had Anton Stralman and essentially chose Girardi instead, which is like deciding in the 1980s to invest in Cabbage Patch Kids instead of Apple.

Every contract, however, is movable. There are two ways the Rangers can get Girardi off the books that don’t involve a buyout or stashing him in the AHL.

Girardi could be amenable to a trade, although he’d probably have to be threatened with playing in the minors. What team would take him? One that values grit and toughness, perhaps to a fault. There are always a few of them around. Maybe Edmonton, Boston, Calgary or Philadelphia? This wouldn’t happen for a while so who knows.

Another path toward ditching Girardi is through an expansion draft, assuming the NHL and NHLPA work something out that allows players with NMCs and NTCs to be made available. Girardi makes just $5 million in salary in 2017-18 and $4 million the last two years, so a team like Las Vegas or Quebec City or Seattle or whoever may find a veteran like Girardi with a contract that gets them near the cap floor to be attractive.

The contract is just a disaster. It’s the type of deal you’d get from, say, a GM that is about to retire, wants one more Stanley Cup and doesn’t care what happens after he leaves the team.

3. Who are the worst broadcasters?

Like, ever? I don’t know. The easy answer is Pierre McGuire but that’s trampled ground. Jokes about Pierre in 2015 are on par with the eighth season of Three’s Company; all the jokes have been made and also I miss John Ritter.

I’d like to ruin something for everyone, though. It’s a thing every announcer says that bothers no one but me. I bet after I point this out, you won’t be able to not hate it. I can’t wait to upset you, the reader.

A team is defending in its own zone. A player controls the puck. He moves it toward the blue line but it doesn’t get out of the zone. What does every announcer inevitably say to describe this situation?

“Cleared but not out.”

Cleared but not out. If the puck isn’t out, it was not cleared. The puck cannot be in the zone if it was cleared. Cleared but not out makes zero sense. If the bar for deciding if a puck is cleared is if a player moves it toward the blue line, the word cleared has lost all meaning.

Hopefully you will throw your remote through the TV the next time you hear cleared but not out.

David Backes. He will be 32 next season, has played a rugged, physical game throughout his career, and that next deal will probably be four or five years for about $6 million a season. His postseason numbers always disappoint. Someone is going to overpay.

There’s a chance he ages gracefully like Shane Doan, but some of that has to do with having familiarity with an organization and coach. Assuming Backes goes somewhere new, it could be an issue.

Doesn’t it feel like other sports free agency periods are way more, what’s the word, fun? In hockey, the players in their primes are almost always locked up long term by the teams that drafted them. LeBron James is flying around in the NBA, baseball players are opting out of megadeals and there’s always a few game-changing free agents in football.

5. Sports and pop culture in one question!

@davelozo yes can you please rank the current Flyers rosters as Star Wars characters as The Wire characters?

6. If you had to choose between either fighting Shawn Thornton, blocking a Zdeno Chara slap shot with your groin or re-watching the first two seasons of The Leftovers, which would you choose?

The Thornton fight. Ideally, he’ll pummel me so badly that I won’t remember watching the first two seasons of The Leftovers.