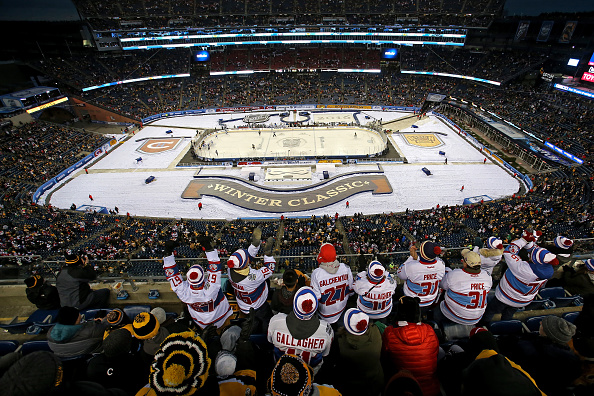 It’s a new year, a new week and nearly the halfway point of the NHL season, which means it’s time for The Comeback’s weekly hockey mailbag!

1. Do you think there are too many outdoor games? I’m not a Bruins or Canadiens fan but I wasn’t into it at all this year. Should they go back to just one game a year? And who should be in next year’s game?

I want every team to play an outdoor game once per season. As much as the NHL is a global league with players from all over the planet, it’s still a localized, niche league for fans. The Winter Classic could have been that regular-season event that pulled in fans from all over but that’s just not the case. The ratings this year were awful but they are always going to be very good in comparison to other games even if most fans don’t care about what’s happening outside of their favorite team’s world.

Hockey fans look at their favorite teams the way parents look at their kids; they have zero interest in your team or kid but here’s 11 videos we uploaded to Instagram of our kid eating cereal and staring at a wall because it’s the best kid in the world. You kid needs to be Sidney Crosby or Alex Ovechkin to get a hockey fan to watch for two hours.

The other issue is the game is nothing special on television. I’ve attended six outdoor games and there is nothing quite like it. It’s an event in every sense of the word. On television, there are moments where you get that sense but there’s not much separating it from indoor games. Sure, NBC will show you power plays from Veritgo Cam, challenging you to avoid vomiting on your couch while you battle a champagne-fueled hangover, but it’s just another game on TV.

Yes, Stadium Series games take away from the luster and drawing power of the Winter Classic but these games sell out and generate millions upon millions of dollars. The local markets will always watch the local teams so I say keep the Winter Classic but let more teams take part in other games. Hold an outdoor game in Arizona between the Coyotes and Panthers next year and, sure, the average rerun of SVU will probably have better ratings, but University of Phoenix Stadium will be filled to the brim with fans buying jerseys, hats, beers, etc.

Two years ago, I wrote an admittedly ridiculous thing where I outlined a way to have 15 outdoor games in a season. I stand by it.

As for next year, the Dallas Stars absolutely have to host a Winter Classic at Cowboys Stadium. They should have been part of an outdoor game this year, because even though no one foresaw the Stars being the best team in the league, we all knew they’d be fun to watch, and getting fun hockey on national TV should be the NHL’s primary goal with these games. If you want to get a fan to watch a game that doesn’t involve their favorite team, have the game include a team that plays an exciting brand of hockey if it doesn’t have a brand-name NHL star.

I couldn’t name 20 players in the NBA but I’ll watch the Golden State Warriors when they’re on TV because they’re so much fun. The same principle applies to the Stars. I know at some point that Stephen Curry is going to do something cool and the same thing goes for Tyler Seguin or Jamie Benn. Get the Stars in this game.

Who should the Stars play in the 2017 Winter Classic? The Los Angeles Kings. There’s a pretty good chance these teams will meet in the West final this season so scheduling a potential rematch makes a lot of sense. And even if they don’t get that far, who cares? The Kings might have three Cups in five years when New Year’s Day 2016 rolls around. How about an all-West Winter Classic for once?

As for music, can we knock it off? Or at least stop subjecting everyone at home to Good Charlotte or Alien Ant Farm or whatever band the NHL finds that wasn’t even good 15 years ago? Let everyone in Jerry World watch six minutes of Spacehog but air some sort of human-interest piece during the intermission. NBC has a year to build two segments that will absolutely be more entertaining than watching Evanescence or New Found Glory.

2. Which good guy do you hate?

@davelozo Which athlete, widely considered a good guy by virtually everyone, do you irrationally loathe?

As I’ve gotten older, I’ve gotten more rational as a fan. If someone on Twitter tells me “Eli sucks” or whatever, my inclination isn’t to have a two-hour, 36-tweet war with an egg; I sort of understand where he’s coming from and shrug. I don’t get angry about stuff like that and believe I am a logical sports fan. I don’t hate Bryce Harper because he dyes his hair white and flips his bat. Do whatever you want. I don’t care, man.

Back in 2003, a guy I worked with had (what I thought was) an irrational hatred for Lance Armstrong. I’ll never forget what he said, as it haunts me to this day: “Just because a guy beat cancer doesn’t mean he isn’t a dick.” I don’t know anyone who will ever be as vindicated in one’s hatred for a stranger as my co-worker was, but this question made me think of that.

I went through a mental rolodex of likeable athletes. Richard Sherman. JJ Watt. LeBron James. Maybe I hated James for that whole Decision thing, but I like all of them. Rob Gronkowski seems fun. Peyton Manning’s commercials make me laugh. Derek Jeter seems like a huge phony but you asked about athletes not bloggers so I won’t use him as an answer. Tom Brady is an easy answer if anyone outside of New England liked him.

Is it possible there isn’t a single popular athlete that rubs me the wrong way?

Then I remembered — Aaron Rodgers.

And I can’t explain it. Every athlete at his level has some sort of PR polish but there’s something about it when it comes to Rodgers. Even in those State Farm ads, it seems that being a dick to everyone comes way too easy to him. The fan that shouts his name, the referee, the towel guy that screws up the uniforms; he’s a smug, judgmental prick to all of them. Is that great acting or just the real Rodgers coming to the surface?

It just seems like he’s not being himself to an extent that makes him unlikeable to me. I don’t think he’s secretly running a dogfighting ring or anything but he comes across as someone that doesn’t have a sense of humor about himself. You could make a joke about Packers fans buying stock in the team and he’d be humorless about it. You wanted someone I irrationally loathe, so there it is. I can’t wait to read about how he donated a year’s salary to blind Syrian child refugees. (Ed note: Rodgers is a pretty funny guy and Russell Wilson hangs out with Macklemore in his pool. How is this not being discussed more?)

@davelozo Which teams will have biggest change in winning percentage (better/worse) in second half of season vs first half of season?

Well, Eukanal, if we are going by records as of the date of publication on this fine and noble web site vs. the rest of the season, there are four teams that jump out as answers with two in each category.

Going down New Jersey and Florida: The Devils went nearly two months without back-to-back wins and remained in a playoff spot. John Hynes seems like he knows what he’s doing, but for it to be sustained, Kyle Palmieri needs to score 35-40 goals because no one else is doing much offensively outside of two guys. They have won 12 of 40 in regulation. It all seems like smoke and mirrors. As for the Panthers, man, it’s a great story, but that Fenwick and PDO scream regression in the second half. Maybe it’s not enough to knock them from a playoff spot but they’re simply not the second-best team in the East like the standings today suggest.

Going up Nashville and Anaheim: The Predators are nearly 57 percent in Fenwick but they can’t buy a goal and Pekka Rinne (.908) is way below his career numbers. If they continue to possess the puck at that rate and Rinne hasn’t fallen off a cliff, they should be really tough in the second half. As for the Ducks, they are starting to come around and when a team is your preseason Stanley Cup pick, you ride that team until they are mathematically eliminated. I’ll stand in that wheelhouse until the rising waters crash through and drown me before I jump ship on the Ducks.

@davelozo For which team would be the toughest to select an all-star representative, assuming every team is to be represented?

I can’t find a team that lacks an obvious choice. Even the bad to so-so teams have standout guys, like Columbus with Brandon Saad, or Carolina with Justin Faulk, or Winnipeg with Blake Wheeler.  There’s no team with an “ugh that guy gets to be All-Star” All-Star, unless you’re someone that can’t enjoy John Scott as an All-Star.

But if Corey Perry asks out of the game, who in the world are the Anaheim Ducks going to send?

Their next-best scorer is Ryan Getzlaf with three goals and 23 points in 34 games and he could probably use a long weekend to rest. Then there’s Rickard Rakell with eight goals in 35 games. Sami Vatanen is tied for 23rd in scoring among defensemen. John Gibson has a cool .932 save percentage but he’s started a little more than one-third of the Ducks games this season.

People are up in arms about Scott being an All-Star captain but let’s wait to see the reaction if it comes to, “…and representing the Anaheim Ducks, forward, Andrew Cogliano.”

@davelozo if you were in a real life hostage situation, what fictional character do you wish was real and trying to save you? — Chris Avis (@ChrisRTS) January 4, 2016

I considered Jean-Claude Van Damme in Sudden Death. But the only reason he saved the day is because Luc Robitaille sent the game to overtime. JCVD caught a huge break and I can’t bank on that sort of thing.

Russell Crowe in Proof of Life? Yeah, he got the job done, but he’s kissing my wife while I’m getting tortured on a mountain somewhere? Sorry, buddy. Meg Ryan and I don’t need your home-wrecking ways in our lives.

I’m taking Ben Affleck in Argo. He doesn’t get anyone killed along the way and gives the people trapped in Iran fun role-playing characters. I could be into that. I love bits. Any chance to do a cockney accent while fleeing my captors is too good to pass up. “Allo, guv’nuh! Here’s me passport that’s not all bollocks!”

Yeah, I’d get killed in the airport.