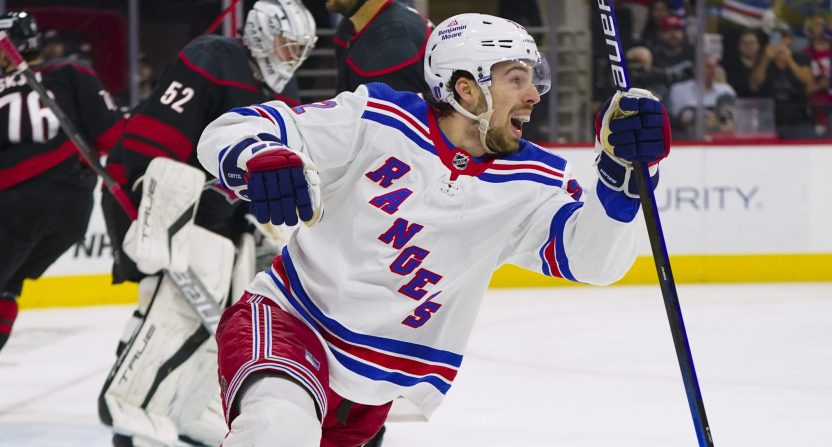 The New York Rangers have had a flair for the dramatics this postseason. In the first round of the Stanley Cup Playoffs, the Rangers overcame a 3-1 deficit against the Pittsburgh Penguins to win Game 7 in overtime.

In the second round, the Rangers faced the Carolina Hurricanes and once again were playing from behind. The home team won every game in the first six games, meaning the Rangers came back from a 2-0 deficit to tie the series and then won Game 6 on Saturday to force Game 7 Monday night.

This time, the Rangers broke the “home team always wins” pattern and dominated in Raleigh. After going out to a 4-0 lead and keeping a shutout going until 12 minutes left in the third period, the Rangers defeated the Hurricanes 6-2 and will face the Tampa Bay Lightning in the Conference Finals.

Many gave their thoughts about the game.

Rangers going from facing 2nd/3rd stringers all postseason to Playoff Vasilevskiy is probably going to be VERY sobering, but Igor has rocked tonight too

Unfathomable to think after how the first three games in Carolina went, the Rangers would come out and score 6 in Game 7. The power play capitalized. The PK was great. And Shesterkin was Shesterkin #NoQuitInNY

The New York Rangers win their fifth game this postseason while facing elimination to reach the Eastern Conference Final. pic.twitter.com/rGGiT7Tm54

The Rangers just dragged their nuts diagonally across the state of North Carolina https://t.co/kwmXI96xnS

The New York Rangers are headed to the Eastern Conference Finals.

A year ago, Gerard Gallant was still a free-agent coach coming off a gold medal at the men’s world championships. He was hired last June 16 by the Rangers. Wherever he goes, players go through a wall for him.

It would be easy to say that the back-to-back Stanley Cup champs, who have been resting up since the 23rd, will beat up on the Rangers but it’s not that simple. Sure, the Lightning will be competitive, but the Rangers are 3-0 against the Lightning in the regular season. And as we’ve seen already in the Stanley Cup Playoffs, never count out the New York Rangers.