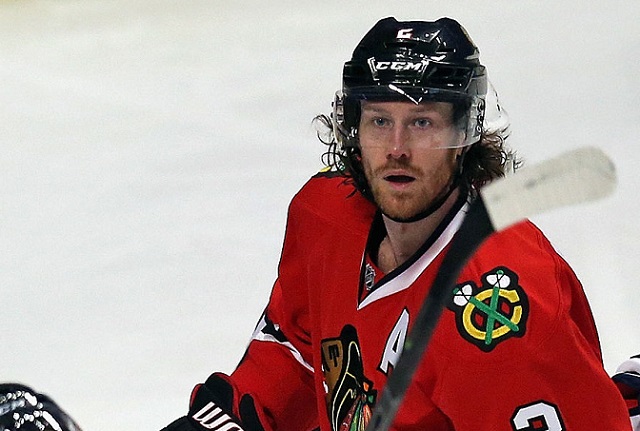 We hear about it all the time. There’s no one tougher than hockey players. It’s a trope so deeply embedded in the game and amongst fans that it’s a regular meme during the NHL season.

“This hockey player had his genitals exploded by a slap shot and didn’t miss a shift; LeBron James sat out the entire season because he yawned and got a cramp in his jaw.”

It’s tired, overblown and if there’s one thing Chicago’s Duncan Keith taught us when he cracked Minnesota’s Charlie Coyle in the mouth with his stick on Tuesday, it’s that in a lot of cases, this is a lie.

What led to Keith cowardly hitting Coyle? Did Coyle hit Keith from beyond? Did Coyle skate full speed into goaltender Scott Darling and dropkick him? What did Coyle do that was so egregious that it required Keith to commit an act that could have cost Coyle his vision?

Keith, so wounded by this, showed exactly how he is not the least bit tough by brandishing his stick as a weapon instead of accepting he was hit, getting up and skating back on defense. He delivered the cheapest of shots because his fragile ego could not handle being knocked on his ass in a sport where everyone occasionally gets knocked on their ass.

In the case of Keith, it can’t be chalked up as a one-time thing. During the 2013 playoffs, the Kings’ Jeff Carter ate a stick from Keith after the two had a shoving match near the net that continued as they skated toward center ice. Nothing says “tough” like hitting a guy in the face with your stick the moment things get a little rough.

It’s a pattern with Keith, who received a one-game suspension for the Carter incident and will almost certainly get only five games for doing nearly the same thing to Coyle when he should get something closer to 10 games.

It’s also a league-wide pattern, as nothing seems to offend the delicate sensibilities of the world’s toughest players like receiving a hit or seeing a teammate receive a hit in a sport that prides itself on hitting. Be careful if you want to hit someone legally, as you may become the victim of an illegal infraction that results in injury or be asked to fight because someone isn’t tough enough to cope with being hit.

Earlier this season, Edmonton’s Taylor Hall was rocked by Florida’s Erik Gudbranson in the open ice. It was fine hit, a clean hit. The 6-foot-1, 201-pound Hall emerged unscathed from the contact with the 6-foot-5, 216-pound Gudbranson. Nobody on the Oilers attacked Gudbranson and Hall continued about playing hockey.

Two periods later, because the NHL is a bizarre institution of machismo and idiocy, fringe NHL player Matt Hendricks launched himself into Florida’s Aaron Ekblad while the latter’s back was turned in an effort to exact revenge for a legal hit, because that’s somehow the same thing as hitting Hall.

What’s tough here? Feeling like a teammate isn’t tough enough to take a hit, so he needs to be defended? Or hitting another guy when he’s defenseless and has his back turned? Either way, wow, that’s really tough.

The NHL has become this nonsense league where “sticking up for a teammate” has reached such ridiculous proportions that players no longer have the right to think of their toughness in such a glowing manner.

Hall took his hit like a professional this season, but in 2010-11, the Oilers lost their minds when the Kings’ Drew Doughty leveled Hall with, again, a clean hit.

Look at all that toughness. It’s as if every player in the modern NHL signed their contracts, got to the rink, took that first hit and said, “Whoa whoa whoa! Hang on here! Did you just hit me? I’m sorry, but that’s not what I signed up for. Prepare to fight me or have your career potentially ended by a stick to the face or hit from behind.”

The cases aren’t always this extreme, but they are rampant.

Tanner Glass of the New York Rangers is one of the toughest players in the league. Yet twice last week, he was hit legally only to have two of his more offensively gifted teammates — Derick Brassard and Mats Zuccarello — “come to his defense,” as they say. Neither Brassard nor Zuccarello dropped his gloves, but both wanted to make sure the other team knew they would not tolerate hitting in a sport with hitting.

Sometimes, nothing happens and a professional hockey player needs defending. Earlier this month, Florida’s Quinton Howden skated into the elbow of Boston’s Adam McQuaid as he’s shooting the puck around the boards. Howden falls onto McQuaid and clings to him until he’s pushed away.

Not on Shawn Thornton’s watch!

There’s no shame in the initial incident for Howden. He’s on the forecheck and catches an elbow from McQuaid, who wasn’t looking to initiate contact, but had his arms accidentally fly into Howden’s face during his shooting motion. Caught off guard, he falls onto McQuaid, who would much rather play hockey than have a human being hugging him, so he discards him into the boards.

But if you’re Howden, aren’t you embarrassed that as an adult who is supposedly tough enough to play hockey, you need a big brother type to fight your battles for you? Isn’t the insinuation here that Thornton thinks Howden can’t handle himself, so he has to handle this for him?

It’s worth noting that these are the bouts fight advocates love. They hate staged fights, but fights after legal contact? Bring them on!

This is the current state of the NHL. Are hockey players tougher than the average person? Oh, sure, no doubt. They play through injuries, slide in front of slap shots and endure in-arena DJs that refuse to take Miley Cyrus off the regular playlist 82 days per year.

But it’s time to take that toughness sentiment down a notch. If the alleged toughest players in the world can’t endure checking without swinging their sticks as weapons or seeking revenge with cheap shots, they don’t deserve to be lauded.