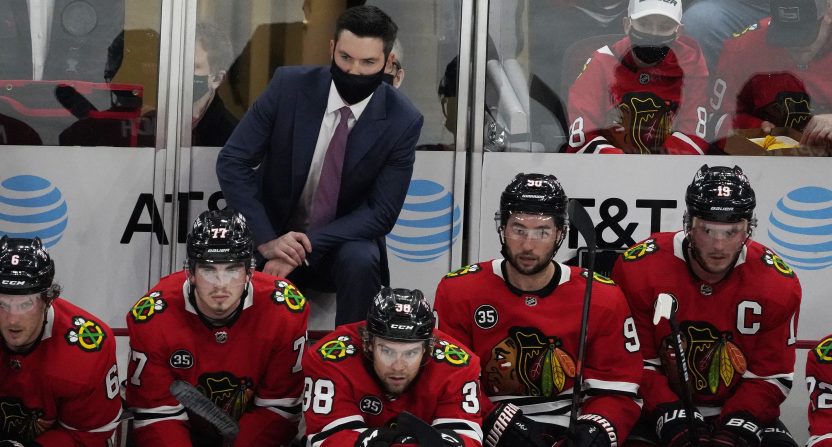 It was a bitter anniversary for Chicago Blackhawks head coach Jeremy Colliton. After three years to the day he was hired for the job, the Blackhawks announced he was fired.

In a statement, the Blackhawks revealed they not only fired Colliton but also fired coaches Tomas Mitell and Sheldon Brookbank. Rockford IceHogs head coach Derek King will takeover on an interim basis. King also replaced Colliton three years when Colliton was hired by Chicago.

To say the Blackhawks had a rough start to the season would be putting it lightly. Chicago began the 2021-22 season at 1-9-2 and are only ahead of the Arizona Coyotes. That, combined with three rather mediocre seasons with Colliton at the helm and GM Stan Bowman resigning a couple weeks ago due to how he handled sexual assault allegations made against Brad Aldrich, Blackhawks fans were hoping for a change and welcomed this news.

Colliton is finally let go?!?!? I don’t like seeing people lose their jobs, but the #Blackhawks are better off and I’m sure he will be too.

This is a move that had to be made. Colliton never should’ve been hired to begin with. It was all about power and control. Stan hates Quenneville. He knew Colliton would have to listen to him. They were tied to the hip. Did exit interviews together.

This is a new era

Got that red alert on ESPN about Colliton pic.twitter.com/MFR6BWVjo3

I like Colliton. He's a good guy with a good future in the NHL. But his 'man and a half' defensive system makes no sense, and that's why the #Blackhawks were among the worst defensive teams in the league during his tenure. https://t.co/Y3zkjqTFuW

I want to say this too about Jeremy Colliton: I don't want to dance on his #Blackhawks grave. As a person, he was great to get to know in Rockford. He just wasn't the right NHL coach.

Me: "I'm not going to drink today since we drank last night."
*Blackhawks fire Colliton*
Me: "Alright, who wants a beer?" pic.twitter.com/xoC4ZJLpC5