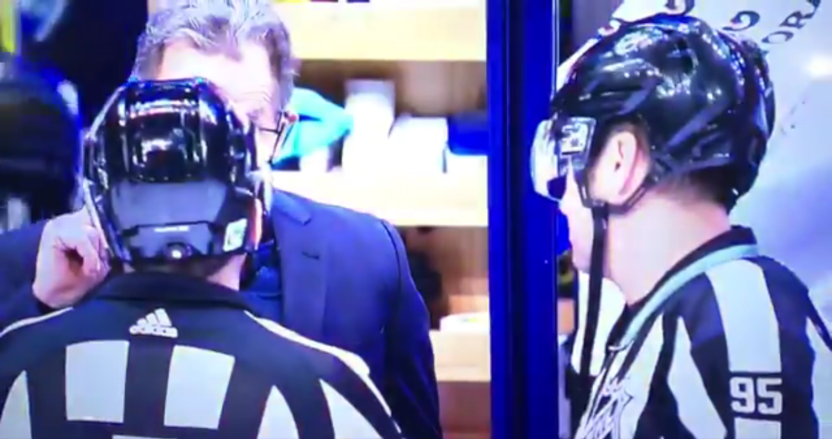 The NHL wound up with one of the worst video review outcomes possible Sunday; a call that should have been reversed on initial review, but wasn’t, wasn’t fully changed after the fact, and wound up as the margin of victory. That happened with a late second-period play in the Carolina Hurricanes-Columbus Blue Jackets game. With the game tied at three, Vincent Trocheck put the Hurricanes ahead 4-3 at the 18:45 mark, but Columbus challenged for offside. That challenge was deemed unsuccessful and the Blue Jackets were given a delay-of-game penalty (for an unsuccessful challenge, a rule implemented ahead of the 2019-20 season). However, during the intermission, the ruling was reversed and the remaining 45 seconds of the penalty were wiped off the board, but the goal was allowed to stand, and Carolina went on to win 6-5. First, here’s the goal:

Worth noting on Trocheck’s goal – Savard was without a stick (broken) and had just gotten Bjorkstrand’s who then was right in the midst of the play himself. #CBJ #Canes pic.twitter.com/hcoCkaMxNy

Here’s the eventual angle that led to the offside call:

re this 🧵—
per @shelleyhawk45 it’s believed on the reverse angle that Trochek was in fact, offside, the penalty has been taken off the board. The goal remains. #CBJ #Canes https://t.co/436M41MaTo pic.twitter.com/o2L6Po99bW

#CBJ penalty for the challenge comes off the board because it was later ruled the #LetsGoCanes Vincent Trocheck goal was offside but goal still stands. pic.twitter.com/3amLbmjHZC

And here’s the NHL’s explanation:

Columbus requested a coach’s challenge for off-side prior to a goal at 18:45 of the second period.

During the review, a miscommunication occurred between the Video Replay Booth in Columbus, the Linesmen and the Situation Room and play resumed before all replays could be reviewed to confirm the off-side. The challenge by Columbus should have resulted in the Carolina goal being disallowed. Subsequently, Columbus was assessed a delay of game penalty. After confirmation in the intermission that the play was off-side, the remaining 0:45 of the delay of game penalty issued was rescinded to begin the third period.

This feels like a miss on several levels. First, the miscommunication that allowed play to resume “before all replays could be reviewed” is a huge problem, and one that suggests that maybe some procedures need a look to prevent this from ever happening again. Yes, waiting for a replay review can be annoying, but there really shouldn’t be any consideration of starting a game again until the final call has been clearly made.

Even after that, though, it feels like the NHL made an error by correcting the remainder of the penalty and nothing else. By their own statement, that goal should not have counted and the penalty should not have been applied. Even taking away the remaining 45 seconds of it as they did, that meant that Columbus still wound up on the penalty kill for 1:15 when they shouldn’t have. And even more importantly still, this decision meant the Blue Jackets wound up down a goal. That’s a big deal in any case, as you don’t know what further effects the correct call would have had, but it’s a bigger deal still in a game that finishes with a one-goal margin of victory.

Yes, it would have been slightly annoying to just rewind the game to the point where the incorrect call happened. However, that would have seemed to make sense on many more levels, and would have fit with some precedent. There have been plenty of NHL cases where play hasn’t initially been stopped, something else has happened, and then the play was rewound to where it should have stopped on review.

A famous high-profile case along these lines came in Game Six of the 1994 Stanley Cup Final between the Vancouver Canucks and New York Rangers, where the Canucks’ Geoff Courtnall scored to give them a 4-1 lead, but play wasn’t stopped because the on-ice officials didn’t think the puck had gone in. The game continued until the next stoppage, which came when the Rangers’ Mark Messier scored to make it 3-2. However, the review officials (in the very first year of NHL video review!) corrected the record at that point, and the game was rewound to Courtnall’s goal and a 4-1 lead for the Canucks, who would go on to win by that score (but lose in Game Seven). So it’s unclear why a similar rewind couldn’t happen here, especially with only just over a minute of game time between the error and when it was discovered.

Look, wrong calls happen, and this is far from the first time in NHL history a goal has counted that shouldn’t. And despite this case, the league’s centralized command center has generally seemed to improve the amount of correct calls (and to standardize what is a correct call). And even if this call had been corrected fully, that doesn’t mean the game necessarily would have had a different outcome; perhaps the Hurricanes still come out on top. But this was an incredible blunder, and it was remarkable to see a league admit they messed up a call, they found out a few minutes later, and they didn’t actually correct it. Most past admissions of blown calls have come after a game or days later when it would be much harder to rewind. This one came at a time when it seemingly would have been possible, but the league didn’t go that way.

The NHL does deserve credit for admitting that they got this call wrong thanks to the miscommunication. It would have been much more disappointing for them to insist that Trocheck was somehow confirmed as onside by replay when that wasn’t actually the case. But this is is still a major blunder and a bad look for the league, and one that should have them examining their protocols to make sure this can’t happen again. Or, if something like this does somehow happen again, they should change their approach so the error should be fully reversed rather than partly reversed.