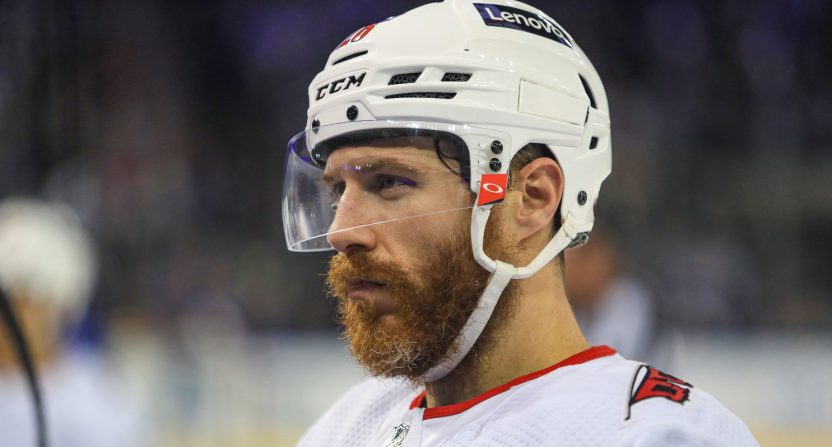 There’s been a lot of discussion of problematic sexual behavior in the hockey world recently, from the Chicago Blackhawks and those who worked with them around the Brad Aldrich revelations to the recent talk around Hockey Canada. The latest development here is with Tampa Bay Lightning defenseman Ian Cole.

On Friday, an anonymous Twitter account using the name of Emily Smith posted disturbing allegations of grooming over a four-year period involving Cole (seen above in May with the Carolina Hurricanes). Those began when the woman in question was a minor. Those are seen in the tweet below (content warning):

On Sunday, that led to reports from Katie Strang of The Athletic and Rick Westhead of TSN on the NHL looking into this, and then the Lightning themselves initially suspending Cole:

NHL is aware of the allegations of grooming and sexual assault involving Ian Cole. According to deputy commissioner Bill Daly, the league is looking into them.

The Tampa Bay Lightning are suspending Ian Cole while the team cooperates with the NHL to investigate allegations of grooming and sexual assault.
Lightning: "…While we gather more details, we have decided to suspend Ian Cole pending the results of an investigation…"

Update: Cole responded with a statement through his agent, relayed by ESPN’s Emily Kaplan Sunday:

Here is a statement from Ian Cole, via his agent. pic.twitter.com/dvHlF9ABCs

With many of these discussions, including what’s going on with Hockey Canada, there’s a lot of debate over what actions are appropriate when. The particular resolution here seems logical for the moment. This means the Lightning are taking their own initiative in determining it’s not great for them to have Cole around right now (their 2022-23 season opener is Tuesday, on the road against the New York Rangers), and an immediate suspension from a player’s own club carries less questions and less pushback than the league imposing a suspension on a club. But there’s still a lot to be determined here in terms of actual investigation and actual conclusions.

Cole, 33, was drafted in the first round (18th overall) by the St. Louis Blues in the 2007 NHL Draft. He turned pro in 2010 following the end of his college career with the Notre Dame Fighting Irish, and played for the Blues, Pittsburgh Penguins, Columbus Blue Jackets, Colorado Avalanche, Minnesota Wild, and Carolina Hurricanes until this summer, when he joined the Lightning on a one-year deal worth $2.5 million. We’ll see what this investigation leads to for him and the Lightning.

(Update: The Lightning reinstated Cole Oct. 15, following the NHL closing the investigation after saying they were unable to contact Cole’s accuser.)