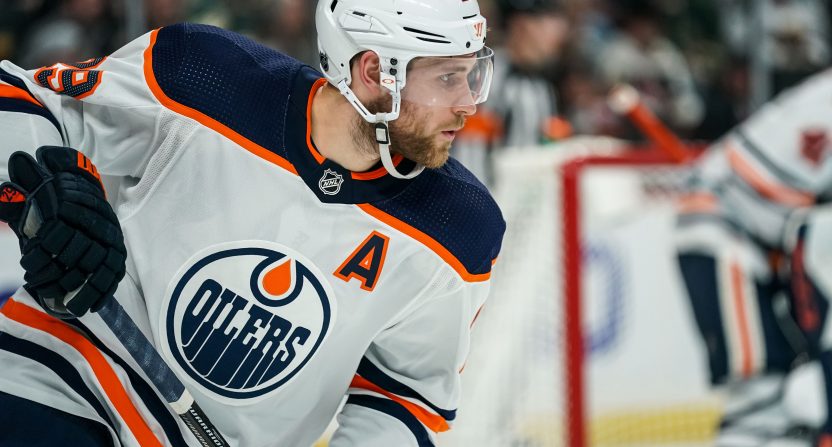 It’s time for the hockey world to recognize Leon Draisaitl as one of the NHL’s elite stars. Hidden behind the glow of teammate Connor McDavid, Draisaitl has quietly emerged as one of the league’s best over the past two seasons. He has rolled an incredible 2018-19 into a start in 2019-20 that’s poised to set some huge numbers.

Draisaitl has 41 points through 21 games this season. Let that fact sink in for a moment. His league-leading 41 points checks in at a jaw-dropping 1.95 points-per-game pace. Using some fancy math, we can forecast that he is on pace to tally nearly 160 points should his torrid scoring rate continue. Even factoring in an extended scoring slump or reduced pace, Draisaitl looks like a lock for another 100+ point season.

Are you surprised to see Draisaitl leading the league in points? You shouldn’t be, but that’s a familiar reaction considering how under the radar he flew last season despite scoring 50 goals. How crazy is it that he wasn’t named to the first or second all-star lineup at the end of last season after posting 50 goals and 55 assists? It’s been easy to overlook Draisaitl’s accomplishments when fellow teammate McDavid is routinely making headlines.

Via the National Post, Oilers forward Zack Kassian may have summed things up the best when discussing McDavid and Draisaitl.

“They’re wired differently. They’re the elite of the elite. Edmonton is spoiled to get to watch these two guys every night.”

The Oilers have an embarrassment of riches when it comes to their offensive talent. Most teams would be thrilled to have one player in the category of McDavid or Draisaitl, let alone both who can make opponents look silly on a nightly basis. Try to shut down one player and the other will burn you.

With Draisaitl and McDavid sitting atop the league in points scored, are the two worried about a scoring race? Hardly. The two both maintain a humble attitude that makes their achievements look like another day at the office. To say the two are grounded would be an understatement.

It’s time for Draisaitl to receive the same level of praise as McDavid. At 24, Draisaitl already has a 50-goal season to his name and appears to be well on his way to back-to-back 100+ point seasons. That’s an incredible accomplishment that shouldn’t be swept under the rug because his teammate is just as talented.

These types of columns almost always end with a “Can this continue?” type of question. It’s a fair question when you see a player putting up points seemingly at will and taking the league by storm. With Draisaitl, his approach to the game makes answering that question a bit more difficult. Where other players have a fairly similar style each game, Draisaitl appears to have a way of adapting to the situation better than most. He can play physical or he can play with finesse. He can play a quick style or grind and wear opponents down. That ability to pick apart opponents has fueled his rapid scoring pace.

You can make a strong argument that Draisaitl is a top-5 or top-10 player in the NHL. It’s time for fans and the hockey media to start recognizing him as such.