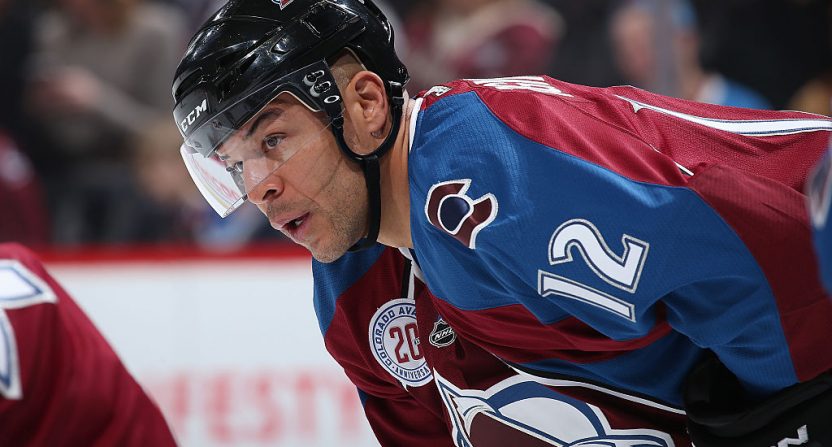 Jarome Iginla is on the move.

The future Hall of Famer was traded to the Los Angeles Kings from the Colorado Avalanche in exchange for a conditional fourth-round pick, according to Pierre LeBrun of TSN.ca. LeBrun further adds the pick will come from the 2018 draft.

Still pending a trade call, so nothing official, but am told LA Kings and Colorado Avalanche finalizing a Jarome Iginla trade

Bob McKenzie reports the Avalanche will retain half of the remaining salary on Iginla’s $5 million deal.

Ultimately, you’d think Colorado could acquire more assets than a single conditional fourth-round pick for the future Hall of Famer, but as low as the return seems, it’s on par with the current market.

It’s been a brutal season for Iginla and the Avalanche. The Avs were expected to contend for one of the Wild Card spots in the West following Patrick Roy’s resignation and Jared Bednar’s hiring. Instead, the organization took one step forward and two steps back, as Colorado leads the league with 41 losses and has the fewest wins with just 17. Calling their play atrocious is offensive to the word atrocious.

The team’s struggles meant the Avs were open for business and Iginla was expected to be dealt in the final season of his contract.

Acquiring a conditional fourth-round pick was about as good as general manager Joe Sakic was going to get. After three consecutive 20+ goal seasons, Iginla’s production cratered in 2016-17. Seventh in scoring on the Avs, the 39-year old notched just eight goals and 18 points in 61 games. A 24-point pace would be the lowest of his career.

Strangely enough, for a player looking to get his first Stanley Cup before he retires, the Kings aren’t the obvious landing spot. Despite recent success, including Stanley Cup wins in both 2012 and 2015, Los Angeles has been largely unexceptional this season.

Goaltender Jonathan Quick missed almost the entire season thus far, sinking the Kings out of the playoff picture. As a result, L.A. sits one point out of the final Wild Card spot in the West. With their All-Star goaltender back, plus the addition of Ben Bishop, the final couple months of the regular season will decide whether they’re contenders or pretenders.

The hope is that by adding Iginla, the Kings will get the secondary support they’ve lacked.

From the mid-90s to 2013, Iginla was a prolific goal scorer with the Calgary Flames. Among active skaters, Iginla ranks second overall behind Jaromir Jagr with 619 career goals. He’s accomplished all that he can individually, but the Stanley Cup has consistently eluded him.

Anze Kopitar, Marian Gaborik, and Tyler Toffoli have combined for just 25 goals this season. Beyond Jeff Carter (30 goals) and Tanner Pearson (21 goals), scoring beyond the top-three hasn’t been there. Being ranked in the bottom five in scoring in the West is one of the main reasons that the Kings haven’t pushed themselves into the playoff picture.

Iginla’s done this song and dance before. As a rental, he joined the Pittsburgh Penguins on deadline day in 2013. At the time, the Penguins were considered Stanley Cup favorites, making it all the way to the Eastern Conference Finals before getting swept by the Boston Bruins.

L.A. might be Iginla’s last shot at lifting the Stanley Cup. However, it’s an odd fit to accomplish the goal, since the Kings might not even qualify for the playoffs. Perhaps Iginla will provide the boost that’s need to get there.