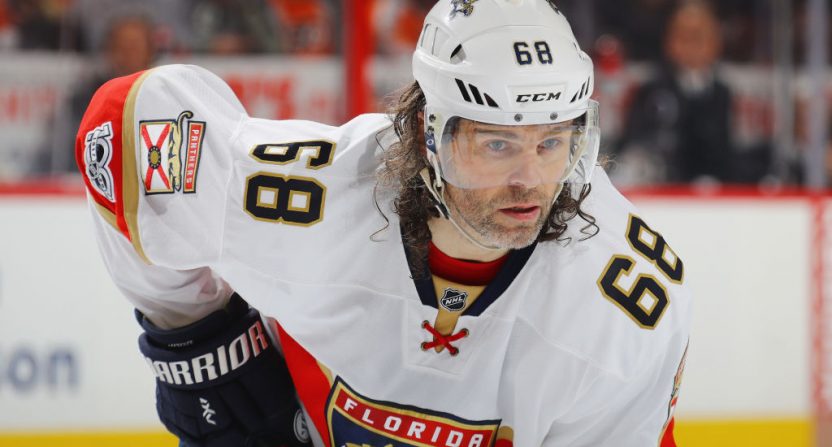 Jaromir Jagr is immortal, eternal, and amazing. He’s 45-years old and still trucking along for the Florida Panthers, and, despite his advanced age, is still producing at a decent clip. He’s now the NHL’s second all time leading scorer, its leading scorer beyond age 40, third in goals, and continuing his amazing play for a Panthers team that has had an entirely miserable season. The impending UFA says he wants to come back to the Panthers for a third full season next year, but should the Cats want him back?

How has Jagr seemingly found the fountain of youth with the Panthers? Playing with young stars Jonathan Huberdeau and Aleksander Barkov certainly helps. Playing with those two, Jagr has put up over 100 points in his two plus seasons with the Panthers. But Jagr, even with his amazing fitness, hands, and hockey brain, has noticeably slowed down.

In a league that is getting younger and faster, can a team with two supremely talented first liners continue to “drag” Jagr up and down the ice every night, or do they deserve a chance to play with someone else who can fully maximize their talent when they are healthy? It’s a tough question for an organization desperate for good PR, which Jagr seems to be the only source of right now.

“We’re already playing for the future right now,’’ Jagr said. “Nothing will make a difference [on my decision]. I still love the game and still want to get better every day I step on the ice. Nothing has changed for the last 20 years I play hockey, so the drive is still there. In my mind, I still always believe I could get better. No matter I love the game, I’ll have to wait and see what happens.

“This organization was so good to me. They give me a chance; they traded for me. … I love it. I play with very good talented players the last few y ears here. I love it, I love it and nothing has changed. It doesn’t matter we didn’t make the playoffs, nothing has changed. I’m the one to be blame, too, so … I have to wait until we finish the season.’’

Jagr hasn’t stayed with any one team this long since he played for Omsk in the KHL, and it makes sense for him to want to stay with the team that has given him his best chance since returning to the NHL for stability, and play with the players who helped revitalize his career. But for a Panthers team desperate to recapture the magic from last season, is Jagr (PR boon and all) the player to help them take that next step? For the Panthers muddled hockey operations staff, that’s an open question.

“[President of hockey operations Dale Tallon] and I haven’t talked about it at all,’’ Panthers interim coach and general manager Tom Rowe said of Jagr’s status. “We’ll talk about it next week. Sixteeen goals, I don’t know how many total points he has, maybe 40-plus. That’s pretty good, so he’s still producing.’’ 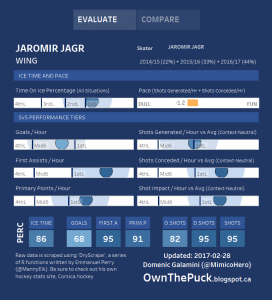 Jagr’s impact the last three seasons, primarily with the Panthers, is incredibly evident as you can see above, as he’s producing like borderline first line forward, even with the injuries to Huberdeau and Barkov. But he plays at a slow pace even with the puck possession he generates, which at some point is going to become a major drag on the Panthers two best forwards.

Can Jagr continue to produce at the level he’s been producing at in Florida for another season? Since we’re talking about Jaromir Jagr, the answer is probably yes, but can the Panthers risk that at this point when they need to take another step forward, and Jagr is probably not the player that can help them do that? They still don’t score a ton of goals, and he was their leading scorer last year with only 66 points.

The Panthers struck gold when they traded for Jagr back in 2015, but at some point, the well runs dry. Florida might be better suited to quit before the well runs dry, and that might well be this offseason.