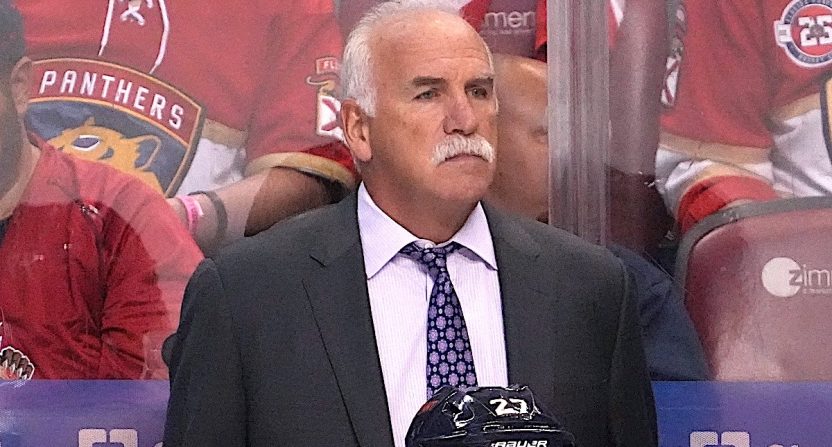 The report from law firm Jenner & Block explained that Blackhawks officials met in May 2010 to discuss accusations of Aldrich sexually assaulting one of the team’s players. (Upon release of that report, Kyle Beach revealed himself to be the victim, mentioned in the document as “John Doe.”)

Quenneville met with NHL commissioner Gary Bettman in New York earlier Thursday and announced his resignation hours later. The veteran coach had approximately three years and $15 million remaining on the five-year deal he signed with the Panthers in 2019.

“The National Hockey League agrees with the decision tonight by Joel Quenneville to resign his duties as head coach of the Florida Panthers,” said Bettman in a statement.

“In his former role as Chicago Blackhawks head coach, Mr. Quenneville was among several former members of the Club’s senior leadership group who mishandled the 2010 sexual assault claim by former player Kyle Beach against the Club’s then-video coach, Brad Aldrich. And, following a meeting with Mr. Quenneville that took place this afternoon in my office, all parties agreed that it was no longer appropriate that he continue to serve as Florida’s head coach.”

Statement from NHL Commissioner Gary Bettman on the resignation of Joel Quenneville. pic.twitter.com/1KjdI2SKOL

According to Bowman, Quenneville and McDonough preferred not to deal with the issue and focus on the Blackhawks making a run for an eventual Stanley Cup championship. All three later denied any knowledge of the allegations despite being at this meeting.

Aldrich was allowed to keep his job through the team’s championship run and allegedly assaulted an intern the day after Chicago won the Stanley Cup. Though he was eventually asked to resign, Aldrich received a severance, a playoff bonus, and a championship ring. Additionally, his name was engraved on the Stanley Cup trophy, he was allowed to keep the Cup for a day, and he attended the team’s banner-raising ceremony the following season.

“With deep regret and contrition, I announce my resignation as head coach of the Florida Panthers,” Quenneville said in a statement. “I want to express my sorrow for the pain this young man, Kyle Beach, has suffered. My former team the Blackhawks failed Kyle and I own my share of that. I want to reflect on how all of this happened and take the time to educate myself on ensuring hockey spaces are safe for everyone.”

Joel Quenneville won't face any additional punishment from the NHL at this time, but like Stan Bowman he'll require a meeting and approval from NHL commissioner Gary Bettman before taking another job in the league.

In light of the report, Stan Bowman resigned as Blackhawks general manager and GM of USA Hockey. Chevaldayoff, currently the GM of the Winnipeg Jets, is scheduled to meet with Bettman on Friday.

“It should go without saying that the conduct described in that report is troubling and inexcusable,” said Florida Panthers president Matthew Caldwell in a statement. “It stands in direct contrast to our values as an organization and what the Florida Panthers stand for. No one should ever have to endure what Kyle Beach experienced during, and long after, his time in Chicago. Quite simply, he was failed. We praise his bravery and courage in coming forward.”

Andrew Brunette takes over as the Panthers’ interim coach. He’s been an assistant with Florida since Quenneville became the head coach in 2019. Prior to that, he spent five seasons with the Minnesota Wild as an assistant coach and assistant GM. A 16-year veteran as an NHL player, Brunette has never been a head coach.