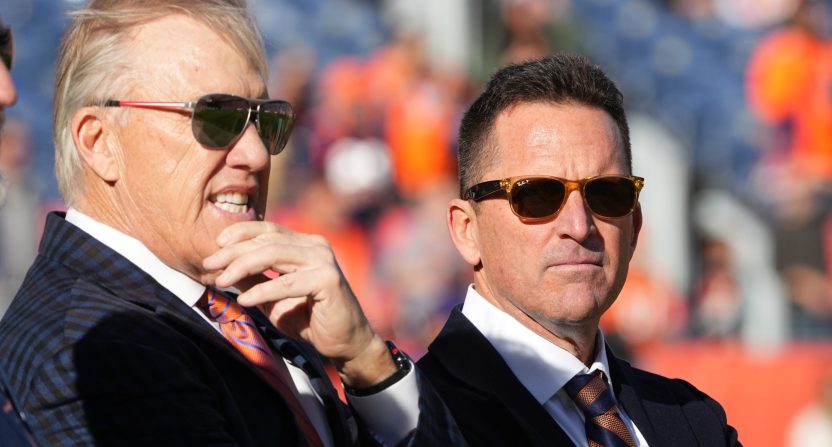 Brian Flores dropped a bombshell on the NFL on Tuesday, filing a class-action lawsuit accusing the New York Giants and the rest of the league of racial discrimination in their hiring practices.

The most shocking parts of the lawsuit involved allegations that the Giants had already decided to hire Brian Daboll before interviewing Flores and that Dolphins owner Stephen Ross offered him $100,000 per loss in 2019 in order to tank on purpose.

However, the Denver Broncos and John Elway also get namechecked in the lawsuit over an interview that Flores attended for their head coaching vacancy in 2019.

“In 2019 Mr. Flores was scheduled to interview with the Denver Broncos,” read the lawsuit. “However, the Broncos’ then-General Manager, John Elway, President, and Chief Executive Officer Joe Ellis and others, showed up an hour late to the interview. They looked completely disheveled, and it was obvious that they had [been] drinking heavily the night before. It was clear from the substance of the interview that Mr. Flores was interviewed only because of the Rooney Rule, and that the Broncos never had any intention to consider him as a legitimate candidate for the job. Shortly thereafter, Vic Fangio, a white man, was hired to be the Head Coach of the Broncos.”

That’s quite the allegation to lob in John Elway’s direction and it did not go unnoticed by social media.

Broncos execs rolling out of the Sprinter van like tumbleweeds https://t.co/0XXgzTEipH pic.twitter.com/5MYSLXo4lz

People are gonna laugh off hungover John Elway like “oh John you crazy!”, but imagine BFlo spending weeks preparing for interviews, then 60-year old Elway shows up looking like he got hit by a bus cause he’s pounding Patron margs all night, and think about how insulting that is https://t.co/UD8KvfEAIZ

These are from Flores's lawsuit against the NFL. pic.twitter.com/F4AqCzK6ua

Broncos II to Flores: "time of 7:30 am on Jan. 5, 2019, in a Providence, R.I., hotel. There were 5 Broncos executives present for the interview, which lasted approximately 3 1/2 hours—the fully allotted time—and concluded shortly before 11 am. (more) #9sports

Broncos IV to Flores claims: "candidate for our head coaching position. The Broncos will vigorously defend the integrity and values of our organization—and its employees—from such baseless and disparaging claims.” #9sports

There’s likely more to come on this lawsuit and the role that Broncos end up playing in it.

The fact of the matter is that, like so many other franchises in the NFL, Denver has only had one Black head coach in its entire history (some have none) and he was fired after two seasons, less time than many other coaches have gotten (including Vic Fangio, who got three years). The issues that Flores’ lawsuit raise go far beyond one interview.