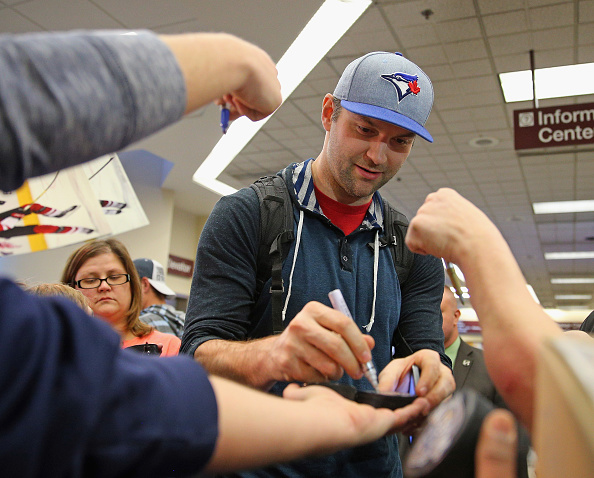 NHL All-Star media day arrived today, and as expected, John Scott was the focus of attention in Nashville.

The NHL had tried to keep the 6’8″ enforcer out of the All-Star Game, offering to pay for his trip if he didn’t participate, but that didn’t stop Scott from going. In a piece penned for the Players Tribune, Scott, who was initially lukewarm on the idea of going, said a phone call changed his perspective when the NHL asked him “Do you think this is something your kids would be proud of?”

Ever since, Scott’s been hamming it up and trying to become one of the most likable hockey players ever. After a media srum, he told the press to stick around so he could snap a photo.

"I want to take a picture of you guys. Don't leave so I can get a shot." -John Scott on his massive scrum pic.twitter.com/BaDOuV6rse

Scott appeared on Sportsnet and said he’s hoping to score six goals in the games itself (he’s got five in his NHL career) and hopes to hit 103 MPH in the hardest shot skills competition.

Scott also had the chance to meet Puck Daddy’s Greg Wyshynski, who is partly responsible for fans voting him into the game. The two had a funny back-and-forth, in which Scott admitted the thought of punching Wyshynski crossed his mind.

Finally met John Scott. He said "oh hey you're the guy who got me here." (Cont)

I told him I wanted to say hi after all of this, and admitted that I wasn't sure if he was going to punch me in the face. (Cont)

Scott on punching me in the face: "The thought had crossed my mind."

I said "you know, people say we look alike."

John Scott, looking down at me: "God I hope not."

NHL Commissioner Gary Bettman sheepishly said Scott was “welcome to be here,” and that “the fans spoke, and we’re happy to reflect their will.” Scott, a better man than myself, seems to have forgiven Bettman and says he feels welcome at the festivities.

Let’s hope Scott reaches his six goal milestone and walks away as MVP.