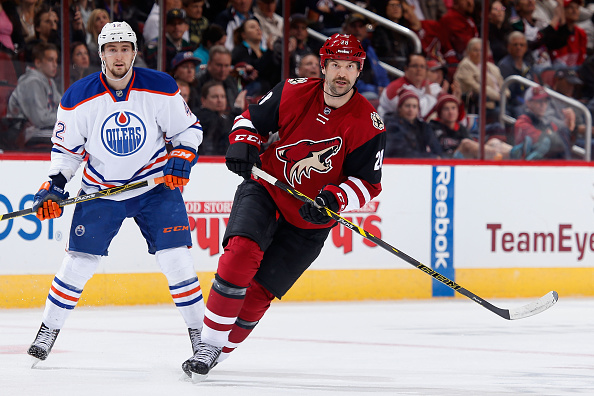 In a heart-warming twist, former Phoenix Coyotes forward John Scott was named MVP of the All-Star game after scoring twice in tonight’s game.

The NHL changed things up this year, having divisions face off in semifinals, with the winning team from each conference playing in the final. In game one Scott scored twice, including this beauty on the breakaway.

John Scott on a breakaway. No mistake. #NHLAllStarhttps://t.co/f6GSf8fCVQ

Not only did he score, but he dropped the mits with Patrick Kane.

Scott’s family cheered on as Scott surprised everybody, reminding viewers that even enforcers can play hockey well.

The final’s was a 1-0 win for captain Scott’s Pacific team. Even though he didn’t register a point in the finale, on entertainment value alone Scott was the MVP – the goals were just gravy. The NHL fought hard to keep Scott out of the game, so even participating in the game is a win for him. While Gary Bettman actively discouraged Scott going there, it’s also a win for the league, as it was the most entertaining All-Star game, possibly ever.

It’s certainly weird the NHL’s All-Star Game MVP isn’t technically an NHL player, but Scott has been such a pro during this whole situation he deserves all the positive vibes sent his way. He performed like an All-Star, and rightfully won the MVP, that’s not small feat. His teammates held the 6’7″, 270-pound man on their shoulders as he got his moment in the limelight before he’ll have to return to the AHL.

That moment when the people's champion becomes the MVP.

Plus, how good do you think Scott felt holding the million dollar check (split amongst him and his teammates) next to Bettman, the man who tried to sabotage his campaign?