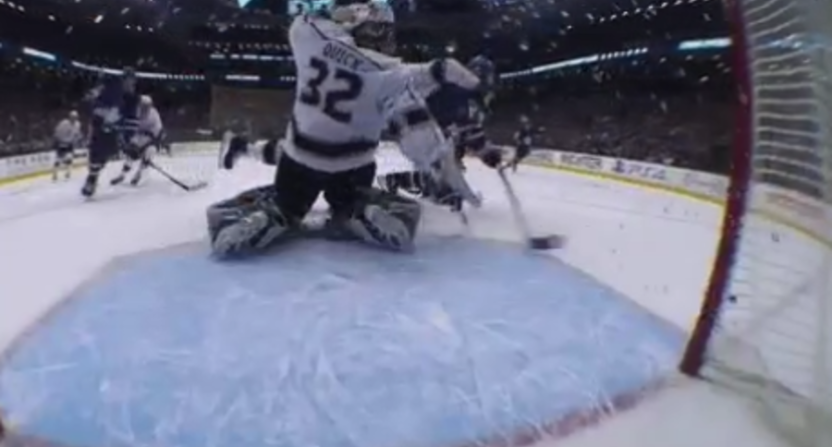 The NHL’s concussion identification and treatment policies have been changing in recent years, receiving one substantial update (including the “quiet room”) in 2011 and another one involving central league spotters in 2016. But the seemingly-inconsistent implementation of the league’s policies still upsets a lot of people, and the latest case in point came from the Los Angeles Kings – Toronto Maple Leafs game Monday. In that game, Kings’ goaltender Jonathan Quick took a blow to the head from a collision with Leafs’ center Zach Hyman (who was battling with a Los Angeles defender) and clutched his head as he went down (but still made a save):

makes save while clutching head pic.twitter.com/iwVWyKEcSK

Quick got up slowly, but initially stayed in the game. Later, a spotter called in and Quick was removed for testing, but only briefly, sparking plenty of Twitter commentary about the examination period being too short:

Jonathan Quick immediately grabbed for his head after Zach Hyman got pushed into him, but remains in the game.

Jonathan Quick got hit in the head five minutes ago, and they're just now pulling him out of the game. How is this effective concussion "spotting?"

Jonathan Quick gets clipped in the head
Spotter calls in minutes later
Quick sent off for one shift
Allowed back after 30 seconds
The NHL! pic.twitter.com/koOHqTGO2M

Jonathan Quick going back to the quiet room for concussion protocol testing: pic.twitter.com/yWxW6pCjtH

Jonathan Quick back out after about a minute on the bench. This is all so absurd.

However, others saw the fact Quick was pulled at all as some sort of pro-Toronto conspiracy:

Here we go with concussion spotter issues in Toronto. #Lakings not happy Quick getting ordered off. Weird this happens in TO. Hmmm.

This is what Lundqvist talked about last year. Hit a goalie, get him removed. And you're always gonna wonder about sinister things in TO.

Harrington, a Buffalo News columnist, is referencing 2016 comments from the Rangers’ Henrik Lundqvist. Here are the key part of those comments:

“What I have maybe a little issue with is the call is coming from upstairs, and if that had been in the playoffs or something, and the goalie is fine and someone upstairs is making that call, I’m not sure I’m going to leave the game from getting that call, to be honest with you,” Lundqvist said. “You compare it to a player that’s going to sit out that doesn’t have that role, if you compare the goalie — I understand you protect everyone out there, it’s a good thought. But when it comes to a goalie, you have to trust the conversation the goalie has with his trainer.”

…“If it’s a big game, and if someone upstairs is calling for the goalie to go off — overtime game — would you leave the ice if you feel fine just because the guy upstairs is telling you to do so? I don’t know,” he said. “I understand it’s a good thought to make sure guys are protected. But at the same time, you do have a break there when the trainer comes out to talk to you. I didn’t like that situation, but it is what it is.”

Beyond the pro-Toronto conspiracy talk, there’s maybe something worth discussing there, especially when it comes to Lundqvist’s comments. And this is along the lines of issues the NFL, NCAA and CFL have had consistently enforcing concussion testing policies when it comes to quarterbacks, a similarly important position. If you remove a NHL skater or a NFL lineman, receiver, running back or defender for a few plays, that still hurts the team, but not as much as if you force them to go to their backup goalie or quarterback. And NHL skaters and NFL non-quarterbacks don’t usually participate in every play, so you can work around their absence with various substitutions, alternate play calls and so on.

It’s much harder to do that with a goalie or a quarterback, and that sometimes leads to spotters, trainers and doctors erring on the side of keeping them in there or sending them back too quickly and getting criticized from player health advocates. It also sometimes leads to players being pulled when maybe they shouldn’t be, leading to on-field consequences and outrage from players, fans and coaches. And sometimes, in situations like Quick’s, you get the worst of both worlds, where some are mad the player was pulled at all and some are mad he wasn’t pulled quicker or for longer, and wasn’t more thoroughly evaluated. That shows how the current protocol really isn’t pleasing anyone, especially when it comes to goalies.

One solution could be simply pausing the game for a detailed evaluation if a goalie or quarterback needs to go through the concussion protocol. It makes sense to play on if a player at another position needs evaluation, even a star, as there are ways to compensate for that, but it should be a bit different with a player in such an important position (and one where the dropoff is often so significant). Of course, leagues would hate lengthening games as a result given the emphasis on pace-of-play in so many sports, but it’s not like this would happen in every game, and it might be both more fair from a competitive standpoint and better for the long-term health of the players in question. Another option could be mandating intensive evaluations for every injured player, regardless of position; that would still create some of the concerns about backup goalies and QBs, but at least it would be more consistent, and it would receive some support from player health advocates. But regardless of the preferred way to fix this, it’s pretty clear that the current system doesn’t make anyone happy, especially when it comes to cases like Quick’s.