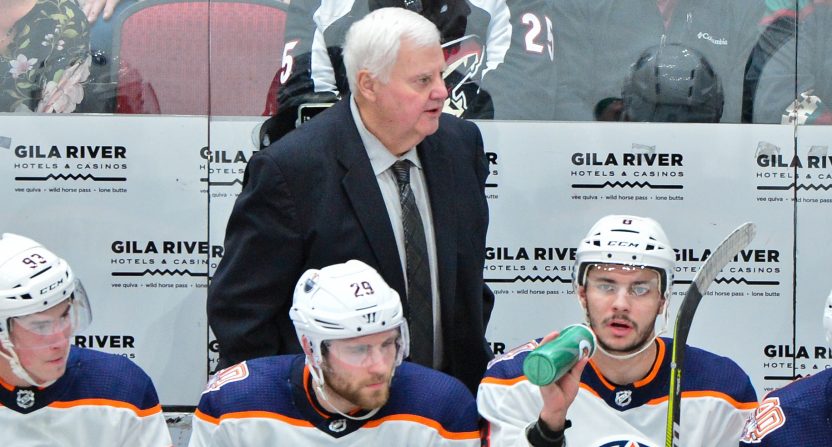 Ken Hitchcock is reportedly fed up coaching the Edmonton Oilers.

Hitchcock came out of retirement back in late November to lead Connor McDavid and the Oilers back onto the right path, but that hasn’t happened. Edmonton’s lost seven of their last eight games and sit out of the playoffs with an abysmal 24-26-5 record. According to Elliotte Friedman of Sportsnet.ca, Hitchcock is already fed up with the team and has considered stepping down amidst all the losing.

“With Ken Hitchcock watching practice from the seats one day and then blasting the Oilers’ effort following Saturday’s 5–2 loss to San Jose, there were rumors he’d had enough and would step down. That obviously didn’t happen, but it underlines how tense things are in Edmonton.”

It’s sort of bizarre Hitchcock would consider stepping down at all, even with Edmonton struggling. He had to know coaching the Oilers, even with the game’s best player in McDavid, would be a challenge. Why come back at all if you’re going to step away when things get bad? He left his last coaching gig after just one season in Dallas. Hitchcock was always going to be a short-term solution behind the bench, but the fact he’s reportedly considering quitting is not a great look.

It’s pure speculation on my part, but does Hitchcock really want to coach? There’s nothing wrong if the 67-year-old wants to enjoy retirement. I’d imagine Oilers ownership begged Hitchcock to stay, as his leaving would be the rock bottom of a season that’s already hit rock bottom more than enough times. Still, you have to wonder why Hitchcock wants to keep putting himself through this when he could easily find a role with less pressure, such as some form of an assistant role, elsewhere.

Edmonton’s in a bad situation. During his tenure with the team, former GM Peter Chiarelli traded away key players to fill holes and imploded a talented roster. The team’s defense and goaltending are below average and the offensive depth isn’t what it needs to be. It left Edmonton with a subpar roster built around McDavid. With his talent, the pressure to win is big. Somehow, the organization has screwed up on a catastrophic scale. Hitchcock was brought in to stabilize things, but after a solid start, things have reverted to more or less the same level as they were before his arrival. Hitchcock’s role as the bridge to the next long-term head coach hasn’t gone as planned.

Despite playing awful hockey, the Oilers are still in the playoff race in the wide-open Western Conference. Hitchcock should at least coach until the end of the season, barring a major surprise. Who knows? He might be able to sneak Edmonton in the playoffs – if he’s committed to doing his job.