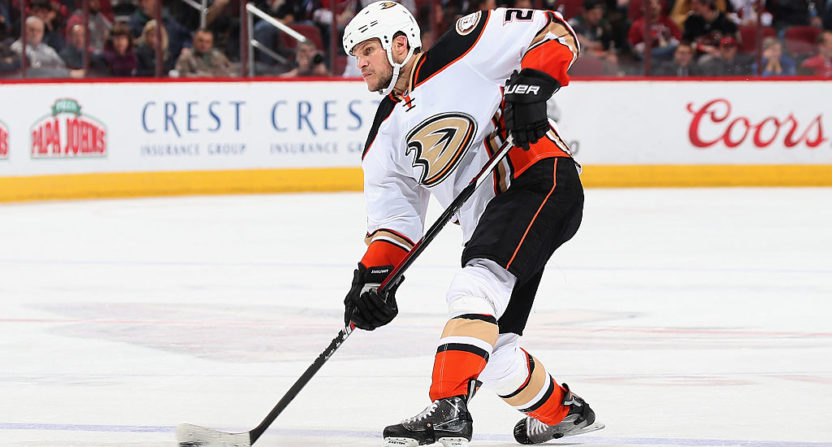 Advanced statistics are pretty common and widely accepted in the NHL these days, but despite their proven ability to show what’s happening beyond the basics, there are still some pretty vocal detractors. Kevin Bieksa of the Anaheim Ducks is apparently one of those analytics naysayers, as evidenced in a recent interview with TSN Radio Vancouver.

While discussing analytics, Bieksa stated that he believes numbers can be manipulated and that they can make someone look good or bad.

.@kbieksa3: I'm not a huge analytics fan. You can make somebody look good or bad with numbers, you can manipulate data.

The 36-year-old Bieksa may not realize that unless the league’s stat keepers are intentionally sabotaging players, the numbers really don’t lie. If you’re failing to maintain possession or if you’re spending too much time in your own zone, those negative traits will be revealed through advanced stats.

And yet, Bieksa isn’t a fan of people tweeting about Corsi.

.@kbieksa3: when you're tweeting about corsi after a game and saying that tells how a guy played, I couldn't disagree more

Bieksa might be missing the point. Advanced stats are supposed to tell more of the story, not less. If a player doesn’t score a lot of points but helps his team out in other tangible ways, advanced stats should reveal that. However, if the advanced stats reveal a player isn’t doing much, there’s no place to hide.

For Bieksa, some of the advanced stats aren’t too kind. His Corsi For % last season was 44.2, meaning the Anaheim Ducks didn’t have the puck very often when he was on the ice. Above 50 means the Ducks would have had the puck more often than not, but Bieksa’s mark falls well below that.

Is it really any surprise that Bieksa isn’t a fan of advanced stats?