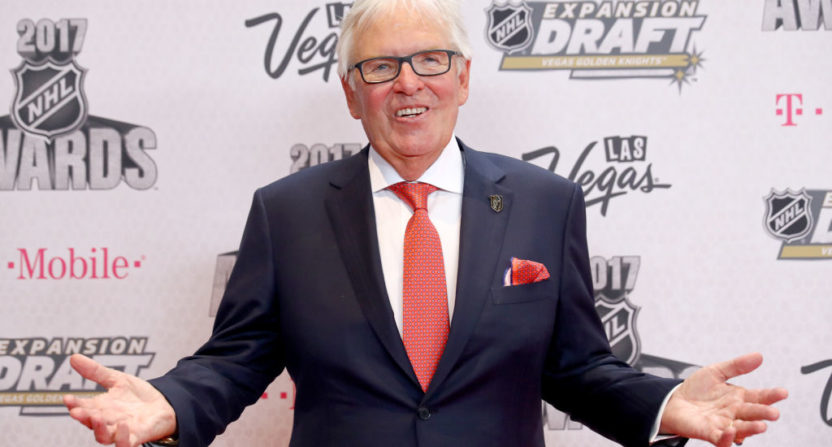 Gambling’s commonly associated with Las Vegas, but Bill Foley, the owner of the NHL’s expansion Las Vegas Golden Knights, doesn’t think it has much connection with his team. Foley recently gave a wide-ranging interview to new ESPN NHL reporter Emily Kaplan, and their discussion about gambling was particularly interesting:

ESPN.com: The relationship between gambling and pro sports is a hot topic. NBA commissioner Adam Silver has been pretty progressive, calling legalized sports betting “inevitable” and saying the NBA will “ultimately participate.” MLB commissioner Rob Manfred says he’s reviewing his league’s stance. As the owner of the first pro team in Vegas, I’d love to hear where you fall in the argument.

Foley: I think gambling is irrelevant to what we’re all about. You can’t gamble in the arena. When we have a game day, we go down on the sports books so you won’t be able to bet on the Golden Knights at some of the local casinos. It just isn’t a factor any longer. Honestly, there’s gambling all across the country — in Indian casinos, in Atlantic City, Detroit. So it’s really not relevant in our view. We’re just here to play hockey and win hockey games.

Foley’s certainly right to note that lots of gambling takes place well outside of Vegas (to say nothing of online sports books), but there are still perhaps more links in Vegas than there are in any other NHL city. And it’s notable that the team plans to close game-day betting at some local sports books; we’ll see what sort of an impact that has.

Of course, there’s plenty of interest in the Golden Knights right now even without the attraction of betting; Foley notes that they’re “basically sold out,” with their season-ticket allotment maxed out, their suites sold and remaining single-game tickets being sold “at premium values.” (That also leads to another notable part of the interview, where he talks about how while they’re happy to have visiting fans of other teams come watch, they don’t need to market to them given the local interest they’ve found, and that they’re already in the “top five, six or seven” in the league in terms of ticket revenue.) But if that demand starts to slip, will they reconsider and maybe work with the sports books a little more? We’ll find out. At any rate, it seems notable that the owner of a team in Vegas not only isn’t too concerned about gambling, but doesn’t even find it relevant to his business.