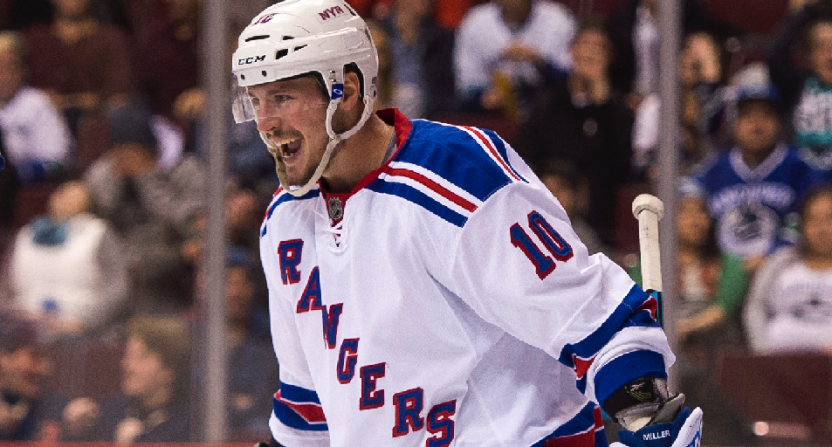 The NHL playoffs are nearly half over. The second round is winding down and people are starting to daydream about various Stanley Cup Final matchups. Is this P.K. Subban’s year? Is it Alex Ovechkin’s? Can the Penguins survive without Sidney Crosby? Can Connor McDavid do the thing in his first postseason appearance?

It’s a time to celebrate the best hockey has to offer.

What about the people who are currently sucking? The Conn Smythe Trophy goes to the most valuable player in the playoffs, but what does the least valuable player get? He gets to be part of a column like this which honors those still in the process of doing that.

And we’re not going to focus on those who faltered and departed in round one, so you’re dodging bullets, Max Pacioretty, Sergei Bobrovsky and Brian Elliott. You’ve been through enough.

So here are the players still alive in the Stanley Cup Playoffs who deserve your scorn through almost two rounds.

The problem: It beats the hell out of me. But for some reason, Holtby hasn’t been great in the second round of the playoffs since the Capitals blew a 3-1 lead (and late lead in Game 5) against the Rangers in 2015. He was ordinary against the Maple Leafs in round one and inconsistent against the Penguins, a major problem for a goaltender that is a Vezina Trophy finalist.

Braden Holtby has been pitiful this postseason: 27 goals against in 10 games. 90% save percentage. Three goals on 18 shots tonight. Awful.

Holtby credited a sports psychologist with his turnaround in Game 3 against the Penguins, citing the phrase, “The puck doesn’t know it’s a big game.” This is one of the many reasons why I am not a professional athlete, because here’s what would have happened if I were this doctor’s patient.

Me: [stares blankly for 10 seconds] This is why I pay you? Of course it doesn’t know it’s a big game. It’s an inanimate object. I’m pouring out my heart, revealing my deepest insecurities, and you’re telling me things that aren’t alive don’t know a game is big? I want my money back.

The problem: After putting up 53 points in 61 games while riding shotgun with Sidney Crosby in the regular season, he may be having the most disappointing postseason of any Penguin. Both he and Crosby suffered concussions in Game 2 against the Capitals, so sorry about kicking someone while they are down, but Sheary has gone from top-line winger to someone who was under consideration to be scratched before his injury.

Perhaps Sheary should make time to discuss his issues with a sports psychologist so he can be hit with the insight of “Sticks only break because the pressure becomes too much to bear, but you are not a stick.”

The problem: Does anyone know what it is? Perry had a miserable regular season, scoring just 19 goals in 82 games. But somehow things have gotten worse in the playoffs. Is he hurt? Is he old? He turns 32 in a couple weeks, so he’s basically a year from a retirement home.

"Hey have you seen Corey Perry?"

"No, I am still looking." pic.twitter.com/SX3MQXZZfp

Perhaps all Perry needs to get going is a good spearing of the balls. Not his balls. Someone else’s balls. Or maybe his balls. At this stage of the season, you try anything to get going.

The problem: While everyone is debating the quality of Connor McDavid’s postseason (it’s fine), Eberle has been a non-factor. He has been a steady source of at least 20 goals during the past four seasons and he’s currently on pace for zero. He reached a new low during Game 4 against the Ducks on Wednesday, as he was relegated to the fourth line. He played just 11:39, his lowest ice time total of the postseason and the regular season.

Perhaps it would help to know that ice time doesn’t have feelings? I don’t know.

The problem: You know how Pacioretty caught a lot of heat for failing to score in the first-round against the Rangers? If the Canadiens scored one more goal, it’s like Miller would be standing in Pacioretty’s place. Miller was the Rangers’ second-leading scorer in the regular season with 22 goals and 56 points in 82 games, so he’s currently producing at an 82-game pace that would leave him 40 points below his regular-season numbers.

What a save* by Craig Anderson.

*I mean, was J.T. Miller aiming for the glove? Like, at a fair? Did he think he'd win a stuffed animal?

Henrik Lundqvist took the pressure off everyone in the first round and offense hasn’t been an issue in the second round, but Miller could catch a lot of heat if the Rangers fall short against Ottawa.