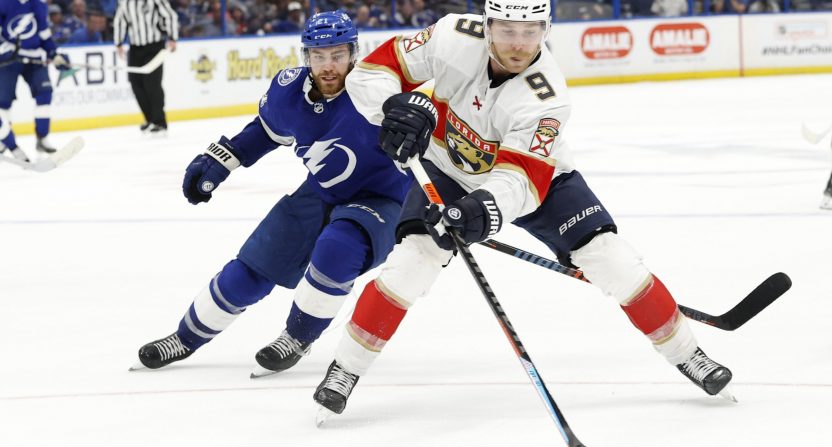 A Florida Panthers fan posted a video that consisted of two Tampa Bay Lightning employees letting him know that he and his 11-year-old son were violating their ticket policy of people wearing visiting team jerseys and were given the choice to remove their jerseys or receive a refund and leave. The fan explained that he spoke to someone named Crystal Ortiz, who informed him that he and his son could sit in their seats but they wouldn’t be allowed into the Chase Club but the two employees let him know they were still in violation.

This policy isn’t new. The Lightning has had this policy since at least 2015 and other teams have similar rules. The Lightning’s reasoning is that with Florida being a state for tourists and people who only live there for part of the year, they’re trying their best to make sure only Lightning fans are able to purchase tickets. It should also be noted that this policy only affects a small number of seats and it doesn’t apply to the majority of the arena.

That being said, while this sounds like a good idea in a meeting, it really paints the Lightning as being very insecure and that they don’t believe that they have a strong enough fanbase able to provide a suitable home atmosphere. When the Penguins and the Capitals play each other, they might be hated rivals but you still see people in visiting jerseys scattered throughout the arena on TV. No one looks at either of those teams and think their fanbase is bad because a few fans of the visiting team are there.

Don’t misinterpret my stance, this isn’t a debate about whether or not the Lightning were wrong for asking these people to take off their Panthers jerseys. As dumb as I feel this policy is, it is a policy and the Lightning have every right to enforce that policy. That’s all fair game and if someone chooses not to follow that, they can leave and receive a refund.

The debate instead is deciding whether or not this is a hill that’s worth dying on. Just in the past day, we’ve had three separate incidents from the NBA where a Knicks fan spit on Trae Young, a 76ers fan threw popcorn on Russell Westbrook, and three Jazz fans made racist remarks toward Ja Morant’s family. All those people have been banned, and rightly so. In this case, we’re talking about two fans wearing a jersey of the visiting team. Yes, that’s a different sport but one of these things is not like the others.

UPDATE: The Tampa Bay Lightning has informed ESPN that they will no longer enforce this policy and will allow fans to wear gear from other teams in premium areas.