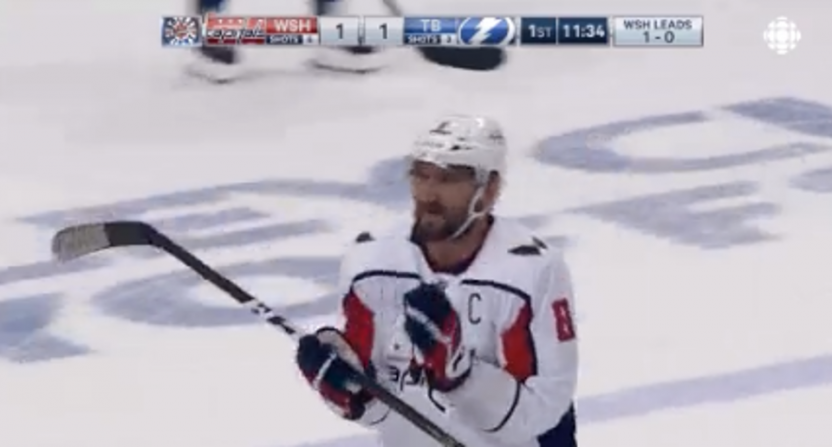 The NHL playoffs often see officiating come under even more of a microscope, and that’s certainly going to be the case with how the first period played out in Game 2 of the Eastern Conference Final Sunday night between the Washington Capitals and the Tampa Bay Lightning. The Capitals, who won the first game 4-2 Friday, got off to a hot start in this one too, taking the lead on an early goal from Tom Wilson (back for this series after a three-game suspension following a second-round hit). But then things went wrong for them, and a couple of officiating decisions played a big role.

First, Wilson was penalized for goaltender interference when crashing the net, a potentially-justifiable call, but one that missed a hook on him from Tampa’s Chris Kunitz just before that. The Lightning tied the game on the ensuing power play, and then things got real bad when T.J. Oshie was called for a high-sticking penalty on a play where his stick didn’t even hit an opponent. This happened when Washington’s Matt Niskanen tried to clear the puck, and Oshie went to knock it down at the same time Tampa’s Victor Hedman reached out to glove it. The puck went off Oshie’s stick and hit Hedman in the face, which isn’t against the rules, but the officials thought it was the stick that made contact and sent Oshie to the box. Here’s the play:

It’s understandable how the officials get to that conclusion: Hedman, the stick and the puck were all in close proximity, and it’s tough to see exactly what made contact with him live. But the replay makes it pretty clear it was the puck that hit Hedman, not the stick:

As ESPN’s Greg Wyshynski noted, that’s going to add to the case for video review of these kinds of penalties:

In any case, it quickly led to a go-ahead goal from Lightning captain Steven Stamkos:

The first penalty and goal wasn’t necessarily quite as egregious, as Wilson did collide with goalie Andrei Vasilevskiy, but there’s an argument that he was pushed in. He was certainly hooked by Kunitz going to the net, so there could have been at least offsetting penalties. Here’s a look at that:

This penalty then led to a quick power-play goal from Brayden Point:

And a sarcastic clap from Washington captain Alex Ovechkin:

Round of applause for the officiating from Alex Ovechkin pic.twitter.com/fruINpu2ct

The Capitals struck back early in the second period to tie the game 2-2, but you can’t blame them for being a little frustrated at how this one has gone so far. This team may be on their best postseason run since 1998, but they still have a lot to prove, and difficult hurdles to clear. And they probably weren’t expecting the officiating to be one of those.