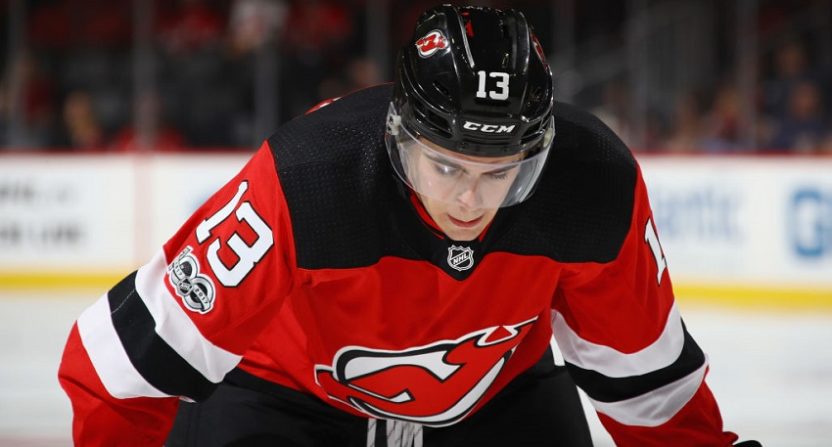 Mailbag! What’s a catch? What’s a face-off violation? What’s going to sink the Lightning? Why is Vegas considering a goal song another team already uses? And is there any reason to be optimistic about being a Red Wings fan?

I’ve got a great grasp on what constitutes an NFL catch these days. Anyone feigning outrage about Sterling Shepard’s non-TD catch against the Eagles on Sunday is either an idiot or doing the best willfully ignorant character since Stephen Colbert on The Colbert Report. If the ball comes out after you get two feet, a knee, an elbow, your penis, one of your balls and your face on the ground, it’s not a catch. It’s stupid and the rule is ridiculous, but we should all know this now.

I have no idea why a guy gets kicked out of the face-off circle like 90 percent of the time. I always assume he farted. I always liked what we did in my leagues, which was put our sticks down at the same time and then whack the shit out of each other and the puck once it was dropped. Absolute anarchy.

Who cares? Only the NHL can make you sweat face-offs.

Over/Under on # of games Girardi plays before the Lightning give up and strap skates onto a sack of flour?

The Lightning seem hexed. Like, they’re gonna open 10-3-1 and Steven Stamkos will be eaten by an alligator. And the Lightning will refuse to give a timetable on his return, even though he’s dead.

“He’s skating, day-to-day.”
“Hasn’t he been consumed and excreted by one of nature’s most perfect killing machines?”
“We’ll see how his leg responds to treatment.”

This is the first year in a while where it feels like, “Well, someone has to win the Stanley Cup, so why not XXXXXX?” can apply to a dozen teams, and really only the Penguins are devoid of obvious holes. At some point, guys like Girardi kill elite teams when playing elite teams that don’t have a Girardi.

They used “Gold on the Ceiling” by The Black Keys, which is extremely frustrating because here is this new franchise with a blank slate that can do whatever it likes, blaze a trail, be creative, and their first option is the song the Nashville Predators use already. This is stupider than that season when the Islanders and Canadiens were both taking the ice to “Fix You” by Coldplay, the song you listen to while crying in a bathtub after you get dumped, not to get jacked fucking up for 60 minutes of hockey.

Pick a song with Vegas in the lyrics. There’s that Katy Perry song the youths seem to enjoy. I say go with the Friends theme song, because that song rocks. Or, “bangs,” as the youths also say.

My dream is for NHL teams to have individual goal songs the way MLB players have walk-up music. It’s hard to do sometimes if you don’t know how a goal was scored. Was it deflected? Did that guy in front touch it or is it the defenseman’s goal? You could always play a generic song when you’re unsure, but wouldn’t it be neat if Vladimir Tarasenko could pick his goal song? He buries a breakaway and like, I don’t know, “Everything Is Awesome” from The Lego Movie plays because that movie is hilarious and the song is funny.

I guess there’s nothing more NHL than the league’s newest team being uncreative with its goal song out of the chute. Shame them into the song you want, Vegas fans. The Sabres got the best goal song in the league because the fans demanded it.

The Red Wings are gonna stink, this much I know, what are the positives you see in Detroit besides the shiny new arena?

Did you know that it’s Sept. 27, 2017 and the Red Wings haven’t signed Andreas Athanasiou yet? They’re low-balling him with a two-year, $3.8 million deal when Ken Holland would probably pay Kris Draper twice that if he came out of retirement today. I don’t know how you Red Wings fans do it.

I guess the bright side is you can mentally check out of the Red Wings this season by mid-November and focus directly on the Detroit Lions collapsing in the second half.

I don’t have any interest in answering any of the other questions so here are two that were sent to the podcast account.

What is the most pointless sport in the world? Reckon Lozo says hockey?

How many "Swiss Miss" jokes are going to be made about Nico Hischier, and am I allowed to hit the people who make them?

The only thing I want from this NHL season is for Nico Hischier to lead the league in shots that miss the net. It’s all I want. World peace? Cures to all diseases? No. Please let Nico Hischier miss the net 250 times. Thank you.