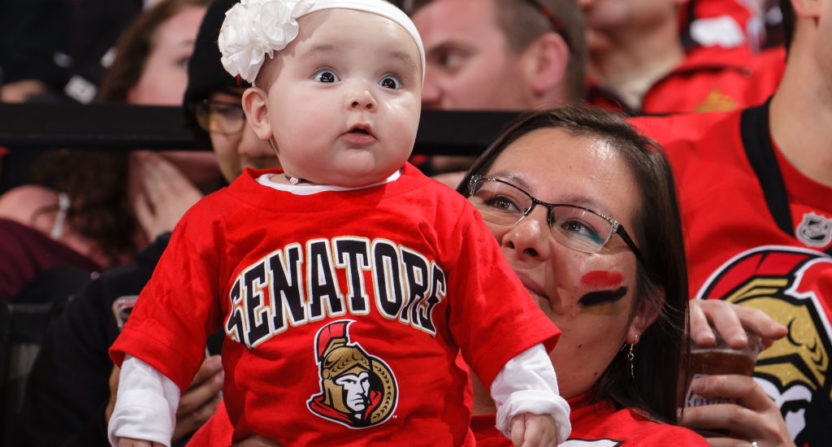 The mailbag is back and so is the NHL season (in a few weeks). While the games aren’t back, you know what it is? A new NHL initiative that sort of involves the Pope! You know what’s back that’s old? Matt Duchene trade talk! You know what exists that’s still bad? The Olympics without NHL players! And exclamation points!

Let’s get loose and declare our principles for the mailbag or whatever.

1. What are the Declaration of Principles and why do we need them? I don’t get it.

I don’t get it either! The NHL goes into hibernation for the summer and emerges like a beautiful butterfly holding a list of principles featuring vague language about the greatness of hockey and no real specific goals. But it’s the kind of thing that a certain group of fans who are oddly invested in hockey being the best sport can stroke it to. And the Pope is mixed up in it! The Pope!

This is the same league that a few months ago turned a blind eye to Ryan Getzlaf using the term “c-sucker” instead of proffering it as a teaching moment about a homophobic slur when a lot of people (even me) may not have even realized was a homophobic slur. Although the NHL and Pat LaFontaine didn’t yet have this historic document typed up, so how could they have known? The league already has Hockey Is For Everyone and partners with You Can Play, but how could it possibly have special principles for that situation if they weren’t declared yet?

But hey, that was the past. A lesson (you’d hope) was learned and now we can move forward. Then again, did you read these principles? I’ve always wanted to Fire Joe Morgan an NHL document, so let’s do this.

• Hockey should be an enjoyable family experience; all stakeholders— organizations, players, parents, siblings, coaches, referees, volunteers and rink operators — play a role in this effort.

Was this not a thing before the NHL held a press conference? I don’t get it. Was there a referee in Kenosha that believed his purpose in life was to get the children to fight each other in the parking lot after games who saw this and said, “Have I been doing this wrong all these years?”

And siblings? If your 8-year-old brother plays hockey and you don’t play hockey, suddenly you have been roped into the cause of hockey because of the sibling clause? Is this legally binding? Can we get a lawyer to weigh in? What about in-laws?

• Hockey’s greatest value is the role it plays in the development of character and life skills.

Is it, though? I bet there are parents that think hockey’s greatest value is it gets their kids out of the house for a few hours so they can sex each other (or watch TV or nap). Developing character and life skills, I assume, was already part of the deal at the youth level, as it is in all youth sports. This feels like a sales pitch for parents that are uneasy about letting their children play a sport littered with concussions. 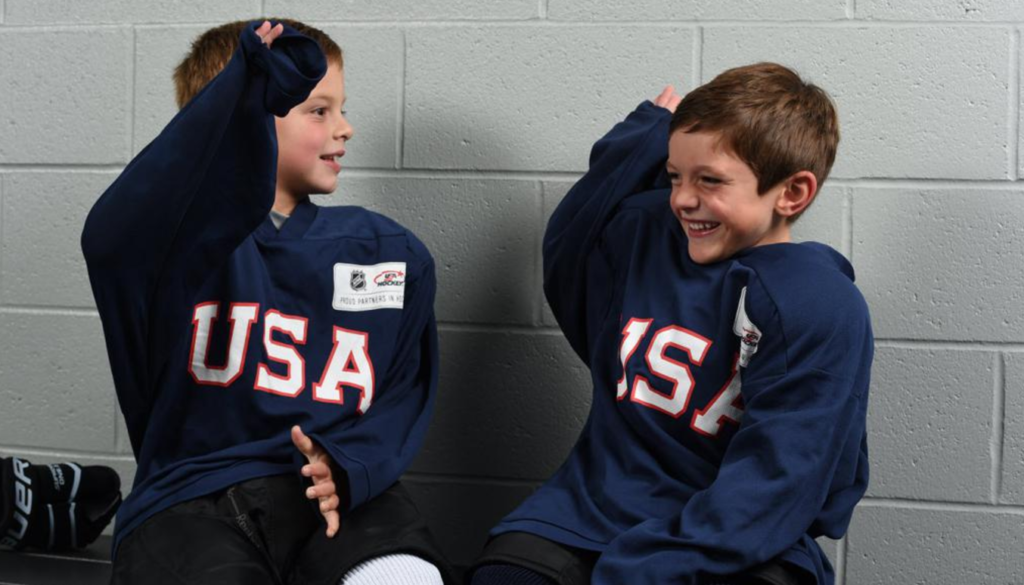 • All hockey organizations—regardless of size or level of competition — bring value to players and families in their ability to deliver a positive family experience.

Do they? It’s more vague bullshit either way. What hockey organizations weren’t doing this? What value? How is the NHL doing this? We’re three bullet points in and so far it seems to be all coded language to get hockey parents to stop screaming at their children in pee wee games and fighting in the stands with other parents over Timmy’s ice time.

• Physical activity is important for a healthy body, mind and spirit.

This one isn’t hockey-specific at all. This could be part of the Declaration of Principles for Lord of the Rings LARPing in the park on weekends. And spirit? Get the fuck out of here, hockey. I see what you’re doing.

• There are significant benefits of youth participation in multiple sports.

• Hockey programs should be age-appropriate for all players, accounting for each individual’s physical, emotional and cognitive development.

Finally, someone is preventing 19-year-old Ronald from destroying 12-year-olds in an organized hockey game. If this truly is an issue — and I’m sure really big kids thrashing smaller kids that are the same age is one — how about an actual rule or guidelines as opposed to this document? How about rules on size limits? I honestly have no idea what the point is here. Don’t all hockey programs strive for this anyway?

• There is great value in all forms of hockey, both on and off the ice.

There is no value to me getting drunk and firing wrist shots with rocks off cars in my apartment complex’s parking lot because my rent went up. I’m sorry, there just isn’t.

• All hockey programs should provide a safe, positive and inclusive environment for players and families regardless of race, color, religion, national origin, gender, age, disability, sexual orientation and socioeconomic status.

Isn’t this Hockey Is For Everyone?

• Simply put, hockey is for everyone.

Yeah, that’s what I thought.

Look, all those bullet points are good things with good intentions. But if there were ever an entity that I wouldn’t trust to put something like this into practice because it’s probably just an empty PR campaign designed to reinforce the idea that hockey is the best sport while catering to the rubes that care deeply about hockey handshakes, it’s the NHL. My gut feeling is LaFontaine truly believes in these principles while everyone above him sees this as good PR and potential photo ops. My gut is cynical, but with good reason.

Check out how some of these are worded — “All hockey programs should provide…” “Hockey programs should be…” “Hockey should be an enjoyable…” Again, great. Hockey (and all youth sports, really) should be doing that. So is the NHL going to fund programs at a youth level to educate about inclusiveness? Is the NHL going to pony up dough for programs that help parents, coaches and administrators foster these family-first environments in this declaration? Call me old and bitter, but I’d like to see the receipts, as the young and hopeful say.

Also, a letter from the Pope saying how much he likes hockey? Jesus Christ. If there’s one thing hockey needed, it’s religious influence. Now I understand why the word “spirit” is in there. Maybe this is just me, but when any entity starts using religion to hock its product, I get uneasy. LaFontaine said this about a chance to meet with the Pope last year.

“When you bring together religion, faith, belief, principles and the value of sport, I think you can have a very powerful conference that ultimately will bring change,” LaFontaine said. “To have someone such as the pope bring his message with an ability to reach so many people, that’s a great way to channel all of this and create a vision for future generations.”

That was in 2016, and now a year later, LaFontaine is reading letters from the Pope during an NHL press conference announcing an initiative about hockey being… I honestly don’t know, good for the spirit? Allow me a hackneyed joke format for making my point:

NHL: Fans, tell us what you want.

FANS: More scoring, the ability to have complete control over All-Star voting and a part of the league website that lists player salaries as they relate to each team’s salary cap.

NHL: I heard more involvement from the Catholic Church. 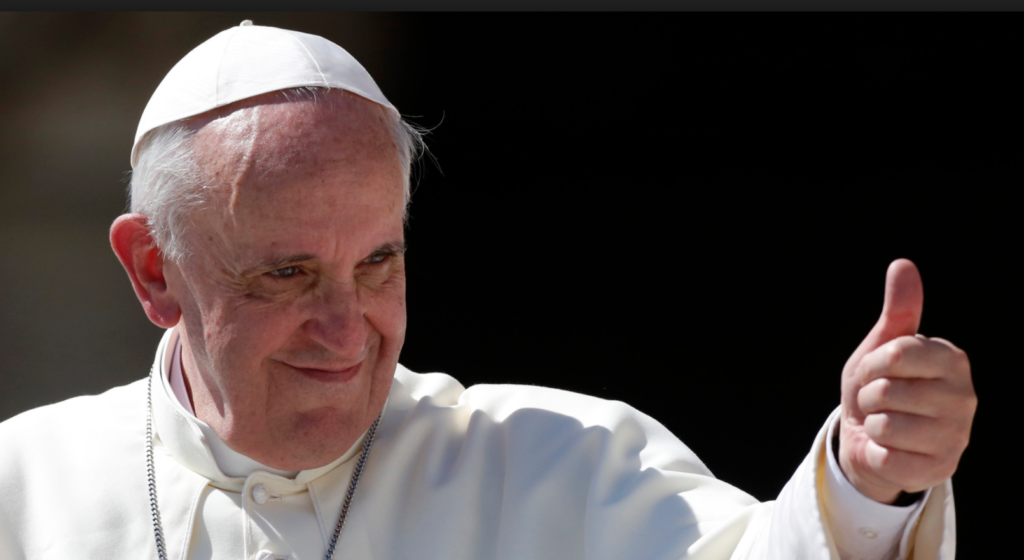 It’s just so hard to trust a league with something like this when they show disdain for their fans and their desires at every turn, even if Pope Francis is The Good Pope. When there’s another lockout in three years, which principle listed above encompasses that? I hope Gary Bettman reads a letter from the Pope about cost certainty and restricting the rights of college free agents an hour after laying off 20 percent of the NHL workforce, so owners can take back a few more dollars from players.

So what could the true purpose of this youth-focused, league-oriented crusade about “family” really be? How would this benefit the NHL and its owners?

Ah, it’s an opening toward raising the draft age from 18 to 19, thus shortening an already short career, thus allowing teams to hold off paying for some of its already underpaid labor an extra year. There it is. You know it had to be something like this.

Also, I totally made up Phil. I just wanted to get into this.

Are people allowed to step on the big cross on the floor of the Vatican dressing room?

I remember the first time I was in the locker room after the Catholic League Cup Final game between the Cardinals and Fathers and Cardinal O’Hara tore me a new one for standing on the Pope logo on the floor.

“Kneel on that shit,” he screamed at me in front of all the reporters. We got hammered afterward and made fun of that crappy Ben Stiller/Ed Norton religious comedy with Dharma.

would any NHL team NOT win Gold at this year's Olympics?

The teams will be comprised of college kids, AHL guys and people in European leagues, which is just another way of saying people not good enough to be in the NHL, so yeah, the Colorado Avalanche could win gold. You’re going to have to really love your country and hate sleep to get yourself out of bed to watch these games live.

Will Duchene ever get traded? Like, ever? For the rest of time?

I hope he sits out all of training camp and the bad GM Joe Sakic “punishes” him by not trading him. Yeah, that’ll show him! That seems like the most hockey response to a player taking part in a genuine holdout. Sakic had a chance to trade him at last year’s deadline, then the draft, then the entire summer, but no one was meeting insane demands.

Now Matt Duchene’s options are go through another bad season while your dopey GM bumbles around the building because he happened to play there? Screw that, Matt. Hold out. Demand a trade. You’ve only got so many years in this league.

Then again, that’ll result in hot takes and shitty comments from ex-players about doing the right thing and how this only happens in the NFL. So hopefully for everyone involved, Duchene is traded to the Islanders six seconds after this mailbag goes live.