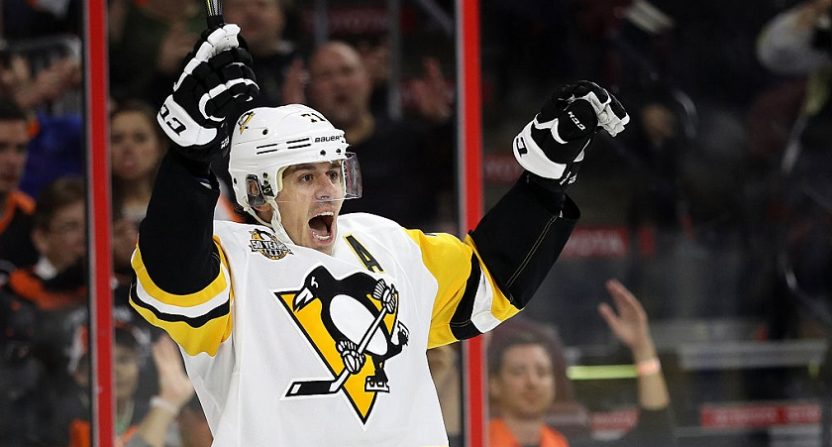 The Stanley Cup Final is almost here. But until then, we are answering the most important questions on everyone’s minds, like which characters on The Leftovers are the best, is Erik Karlsson is better than Sidney Crosby and which animal would I tape to my body so I could sneak it into a game. It’s the mostly hockey mailbag!

As we all know, the NHL decreed that Evgeni Malkin is not one of the 100 greatest players in league history despite his extensive resume of regular-season and postseason accomplishments. And the NHL never gets anything wrong. You could always buy a book that offers a more comprehensive and accurate list that includes Malkin, but that’s up to you.

What would a second Conn Smythe and third Stanley Cup do for Malkin’s chances of being considered on the same level as Jonathan Toews? I don’t know. I think you’re forgetting that Toews could score 50 goals a season if he wanted to, but he doesn’t. He sacrifices those numbers to lead and play defense, much like the way I chose to go bald so people would appreciate my personality more.

That means while Malkin and Toews would be tied in Cups, Toews would have way more theoretical goals and points, thus making him better.

Tough break for Malkin. Maybe if he wins two more Cups, the NHL will consider him for a new list.

@davelozo Can we get an in-depth ranking of characters on the Leftovers with only 2 episodes remaining? It's the ranking we deserve.

The Leftovers is Supernatural if it had a much bigger budget, took itself way more seriously and spent season three thinking everything they did was clever when it was, in fact, so on the nose to be embarrassing. How about this dialogue involving Kevin and Nora when they were at the airport going to Australia?

“I’ll just see you on the other side.”

Get it!?!?! Do you get it?!?! Do you see what they did there? Nora is dying to die to be with her kids but Kevin, who is Jesus and can’t die and wasn’t picked to be a contestant on Australian Radioactive Departure Idol, can’t go with her. That’s what they were getting at with that dialogue. You may have missed that.

They also spelled out “the three wise men” and “the last supper” and went around the table naming which apostles they all are in a story that rips off the Bible the way my screenplay Space Wars rips off Star Wars and features dialogue like, “You are the Luke Skywalker of this story.” It sounds shitty, but the cinematography is outstanding.

You also can’t beat the convenience. Man, what are the odds that the old guy who made Nicolas Cage steal 50 cars in one night happens to know a pilot that can fly him to Australia after a nude submarine man fired off a nuclear weapon? What a show!

But which characters are the show’s best? Here are the top five, and this is non-negotiable.

1. Violins — Nothing has carried the show more in three years. Has a musical instrument ever won an Emmy or Golden Globe? Maybe it’s time we stopped excluding inanimate objects from acting awards.

2. Pianos — Not quite on the same level as the violins, but perhaps should garner something in the supporting genre.

3. The Haunting Version Of That Very Popular Song You Already Know — Has a show abused this tactic more than The Leftovers? I have no idea how official this is, but it feels right so I’m sharing it, but according to this web site, the show has used [takes a very deep breath] 170 songs across 26 episodes. That’s not exclusively Haunting Versions Of Those Very Popular Songs You Already Know, but that’s gluttonous. Whenever a song starts playing over some tedious dialogue involving a mystical thing with extreme close-ups on actors, all I can think about is the final scene of that 30 Rock episode where Liz and Jack exchange meaningful glances over music.

4. Nora — There’s no bigger indictment of the horrible, unfocused nature of this show than the fact they have Carrie Coon in their acting stable and they don’t revolve every episode around her. And you’ll never find a lazier, less-satisfying sendoff of a main character on a TV show than whatever the hell happened in this week’s episode (assuming that was it). Every episode feels like it was written the night before it was due.

5. Every Other Character Tied For Last — Liv Tyler (who was playing Liv Tyler and I won’t hear otherwise) was a central character for two seasons and they just said, “Fuck it, let’s just have a bomb dropped on her between seasons 2 and 3.” A really great way to get around character development (which isn’t even a thing I think is necessary) is to just fast-forward years at a time between seasons and just have the characters change in that unseen time.

The Fireman Murder Man is just a hippie now? The White Clothed Smokey People just don’t exist anymore? Remember the mopey teen daughter of Jesus? A great way to get around characters making decisions that make no sense (Laurie just out of the blue wants to kill herself seven years later?) is to skip time and have the poorly written stories explained away by spiritual things that are discussed over a violin and/or piano. This show sucks so hard, but is shot beautifully and features a symphony, so you can convince yourself the story is somehow coherent or interesting. If every character isn’t dead by the end of this season, I will be very disappointed.

This animal is dead, right? So I can throw it on the ice like a rube? Because there is no live animal I want taped to my body, land or sea.

I’d probably go with a huge snake. Tape it to my thigh. Then during a pat down, when the security guy is going down my leg in awe, I’ll make eye contact with him and shrug like Michael Jordan when he was hitting all those 3-pointers in that game.

4. A Low Down Dirty Shame

@davelozo I watch the nbc feed because I fucking hate the Sportsnet/CBC shame camera after every fucking goal. Question: who else hates the shame-cam?

How in the world can you possibly hate the shame camera? It’s the best. At least 80 percent of the best reaction shots after goals are GMs staring in disbelief or cursing. If my option is either that or the 1,000th shot of the bench jumping after a goal, I choose shame cam every time.

@davelozo I don't fell good today, did I drink too much on Saturday?

Are you over the age of 30? Then yes. I haven’t had a one-day hangover in years. I spent Thursday-Sunday drinking and doing drugs in Seattle a couple weeks ago and I don’t think I was right again until the Wednesday after I got home. And I had not a single rough morning while in Seattle.

If you’re under the age of 30, suck it up. It’s only going to get worse from here.

@davelozo How weird/awesome/unlikely is it for my flyers to go after fleury?

According to CapFriendly, there are 18 teams to which Fleury can be traded. If those 18 teams don’t want him, Fleury would be in a position to force a buyout, which is the only way he’d wind up with the Flyers. With Fleury free to sign anywhere and the Flyers needing a goaltender, it makes some sense. Fleury wouldn’t have to leave the state. That has to be appealing.

But there’s no way the Penguins are flat-out trading Fleury to their biggest rival.

@davelozo Is it possible that Erik Karlsson, not Sidney Crosby, is the best hockey player in the world?

@davelozo For Vegas, what level passionate/die hard/ defensive is acceptable for their fan base to be?

This is an interesting question. I can’t imagine what it would be like to be, say, a Kings fan attending a game in Vegas in October and having an over-the-top Knights fan in your face for three periods talking shit about all the things you could talk shit about when it comes to the Kings. Dude, you just came into existence like 10 minutes. Maybe relax.

I think the appropriate rooting level should be that of Americans who have, for some reason, chosen in adulthood to cheer for an English soccer team. There’s no way you’re not going to be annoying to an extent, because just like the guy cheering Tottenham when he woke up one morning (when you have to watch that dumb sport) and decided to do it, you’re sort of doing the same thing as a Vegas fan. But the Knights are in your city and putting down roots, so you should ease into your annoyingness.

For instance, you need to go through certain rites of passage. You need one of your players to get hit in the head by someone who doesn’t get suspended. You need a winning goal for your team overturned by a murky interference call. You need to get passed over for an outdoor game for a minimum of five years. Once things like this happen, you will be welcomed into the circles that feature people that get mad online because someone is writing negative things about your team.

Literally nothing. But here’s a dumb thing you hear in baseball, but there are definitely examples of it in hockey and other sports, and this drives me insane.

A rookie is on second base. He’s 22 years old. There is one out. It’s April 19. A ground ball is hit to shortstop, in front of the runner, who breaks toward third. The shortstop fields the ball and now the runner is trapped in a rundown. He is eventually tagged out.

Perhaps by law, the announcer will almost definitely say, “That’s a tough break, but that’s a learning experience. He’s a rookie, so there’s a learning curve here in the majors, and he just went through it.”

Look, there are things that become more difficult as you rise through the ranks in pro sports. The speed of the game. The size of players. But things like Don’t Break From Second On A Ball Hit In Front Of You is a rule you learn when you’re 10 that doesn’t change at any level of the sport. I don’t have that perfect example for hockey right now, but you will know it when you hear it and it should drive you crazy.