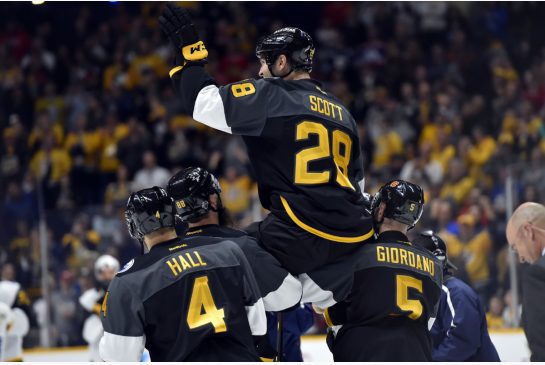 The All-Star break has come and gone with John Scott ascending to the position of grand overlord of hockey. What’s in store of the second half of the season? Could the All-Star weekend have gone any better? It’s The Comeback weekly hockey mailbag!

1. This whole thing has been part of a brilliant master plan from some evil genius (ok, it was Gary Bettman) at the NHL, right? Play the bad guy, and in the process, unite the entire hockey world, drive interest in the otherwise boring ASG though the roof, and make people feel compelled to watch the game. In the end, John Scott is out of your league and you don’t have to worry about him ever again.

I know, that’s giving the NHL a lot of credit that they definitely don’t deserve, but the thought crossed my mind.

NHL conspiracy theories are always my favorite in the genre. It seems universally considered that the NHL is this inept corporate monstrosity that can’t get out of its own way yet is also capable of executing intricate plots to deceive the world. It’s like considering your newborn a drooling idiot that also intentionally times its dumps just for when you are about to sit down for dinner because the kid is a mastermind.

Everything that happened over the weekend that was good for the NHL happened entirely by accident. If the league had its way, Pierre McGuire would have been sitting in a locker stall asking Mikkel Boedker how much he was enjoying Nashville and what it means to be an All-Star. Even during the skills Saturday, it seemed like NBCSN got around to Scott’s standing ovation before his hardest shot attempt late because Pierre was too busy interviewing Jaromir Jagr. 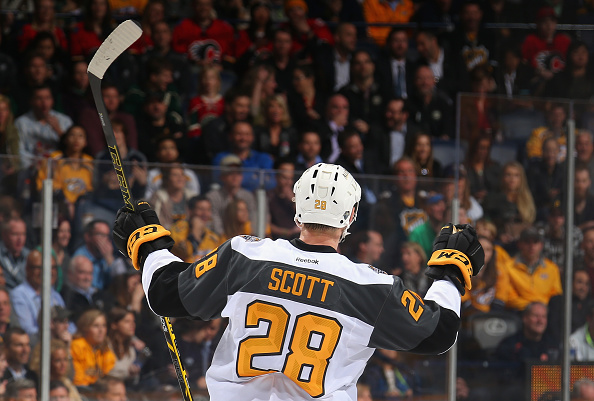 And, despite having a game-high two goals and his team leading the championship game 1-0, Scott wasn’t one of the three choices for MVP; he had to win as a write-in.

Even after all he went through to get there and what he did while he was there, Scott was still sort of an afterthought.

While the idea of Bettman playing puppet master with Scott and our feelings in order to extricate the highest possible ratings and generate immense goodwill toward the NHL, this is an example of someone Magoo’ing there way to a fortunate outcome. A year from now, nobody will care and all we will have are the fond memories of Scott and his pregnant wife walking off with a million-dollar check, but it’s important to never for a second forget the lengths to which the NHL went to screw Scott out of his rightful place on the All-Star team.

What should bother you is how the NHL will attempt to knife this memory retroactively. What does the NHL do when something new goes well? Like the Winter Classic? Here’s 100 more outdoor games. You enjoy this 3-on-3 overtime stuff? Here’s an entire All-Star Game played at 3-on-3.

If the NHL is consistent, instead of minimizing the impact of fans in the All-Star vote next season, they’ll pre-select five enforcer types. Someone like Shawn Thornton will win and the NHL will build an entire marketing strategy around it, then be confused why nobody wants to watch his interviews on the league web site or why ratings plummeted.

This should go down as a once-in-a-lifetime experience that doesn’t need a sequel. Think of John Scott, All-Star like Galaxy Quest. Don’t think of it like Horrible Bosses and subject us to a second one because you couldn’t believe how successful the first one was.

@davelozo Is JR the only person to have #PlayedTheGame to come across as if he #NeverPlayedTheGame?

If you were dropped in front of a TV and asked which of Kenny Albert and Jeremy Roenick had experience playing professional hockey, there’s no way you could make a reasonable deduction that Roenick had a borderline Hall of Fame career.

Roenick got caught with his ass sticking out on the Scott stuff, saying he was embarrassing himself and the integrity of the blah blah blah. There’s nothing wrong with that opinion on the surface, but almost everyone who had played in the NHL was nearly unanimous in their joy to see Scott be named an All-Star, as while the idea of fighting in the NHL can be divisive, everyone that’s ever played the game appreciates the role of the fighter…yet Roenick seemed to have missed that lesson.

“He has to hit targets! He must be nervous!”

“He has to make passes into tiny nets! He must be nervous!”

“He has to stickhandle! He must be nervous!”

3. Is Gary Bettman getting six more years as commissioner insane? It seems insane.

Bettman has made the owners more money than ever. Record revenue and all that. Bettman is 63 years old and clearly he has the job he loves. If you thought Bettman would retire to spend his final years (when his contract ends, he will be the same age as David Bowie when he died) learning to paint or hiking the Andes, he’ll probably earn about $60 million over the deal, so he can pay a dude to paint whatever he wants and hiking is dumb anyway.

Then there are all the reasons that made it seem like Bettman’s end as commissioner was coming sooner rather than later.

• He engineered two lockouts in a decade

And that’s just a snippet. But here’s the thing: all those reasons for Bettman needing to go are also why he needs and wants to stay.

Dumping all that — plus expansion, plus the current CBA potentially ending in 2021, plus the NBC deal ending in 2021 — on a new commissioner wouldn’t be fair. Bettman will be 69 when his new contract expires and he has the opportunity to leave the NHL in a nice place when he retires.

@davelozo Why are there no successful Asst Coaches from the B Belichick coaching tree?

This is a straight-forward question with complicated answers. There are hundreds of factors at play for each assistant, like the timing of their departures, the personnel of their new teams and how interpersonal relationships and salary cap space can impact long-term success in short-term parameters.

Or, the infrastructure the Patriots have in place for cheating can’t be matched inside other organizations. It’s probably that one.

5. Give us one bold prediction for the rest of the season that will surely turn out wrong and we can hold it against you when it is wrong.

Someone other than Patrick Kane will win the scoring title.

And that someone will be Jamie Benn.

Benn is 15 points behind Kane with three games in hand. After last year’s All-Star break, Benn made his Art Ross push with 47 points in 36 games. That alone won’t be enough to propel Benn to the top of points list, but Kane could be on the verge of going dry.

Yeah, Kane’s shooting percentage of 15.8 isn’t so far above his career mark (12.3) that it’s not sustainable the rest of the way, but you wanted a bold prediction so these are the straws at which I’m grasping. At the least, Kane’s scoring pace should slow a little.

Look, it’s not much, but it’s two more easy opponents for Benn, and I’m trying to mount a flimsy argument.

So let’s say Benn gets two points in the Stars’ final game against the Predators on April 6 to edge Kane by a final of 102-101.