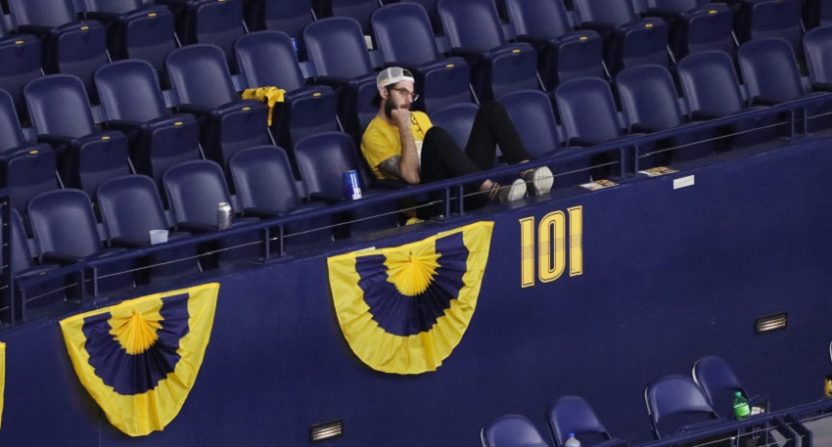 The Penguins are still our hockey overlords and are the favorites to win the Stanley Cup again next year. But what if you’re a Predators fan and need to get over the most crushing loss you’ve experienced? What was up with the Conn Smythe voting? How could you tell the difference between a rigged game and a poorly officiated game? And the plan that could prevent the tragic mistake that cost the Predators in Game 6.

How do I process these emotions now that the Preds have lost? Alcohol?

Drinking helps. This is a day late, but you can’t put on ESPN (or a sports network that cares about hockey) in the immediate aftermath because you’re liable to accidentally stumble into Game 6 or Stanley Cup parade highlights. Sports talk radio can’t be part of your week, especially when the Cup is won on Sunday.

If you’re not into drinking, binge watch some TV shows. Stay off Twitter for a couple days for your mental health. (That’s good advice, no matter what.) Don’t allow yourself to think about next season until the expansion draft or the Predators make a move to adjust their protected list. Go to the beach. See a movie.

OK, now for the worst part — losing in the Final means you are almost guaranteed to not win it next season.

One team in 33 years — of course, it was the fucking 2009 Penguins — lost in the Final one year and won it all the following the year. And that only happened because the NHL set up a compressed Final schedule that ravaged the old-ass Red Wings. So maybe if the Predators get back there next year and play seven games in 12 days against another old-ass team, prepare for more disappointment in 2018.

So this awful, terrible pain in your stomach that hasn’t gone away yet? It will be the best you feel about your team for at least a year! Thanks for writing!

What would a playoff game that was actually rigged look like?

I don’t believe an NHL playoff game has ever been rigged, but my contention has always been this: If the NHL doesn’t demand that officials all have the same standard for penalties throughout every game and every series, that makes it really, really easy for a referee to fix a game. How could you tell the difference between a rigged game and one being officiated by a standard a referee invented 15 minutes before the game? You couldn’t!

Game 6, of course, wasn’t rigged. It was just your latest example of incompetence. Losing sight of the puck and blowing a whistle that quickly should never happen with two referees on the ice. It may have cost the Predators a game and a championship, and anyone who tells you, “But the Predators had four power plays and a long 5-on-3!” is ignoring the fact that four power plays don’t cancel out a goal being taken away. Those power plays don’t happen if not for the blown call and expecting a team to go 25 percent on a power play is not an even trade for a goal.

3. Revenge of the Sith

How would you feel if your ex teammate banked in the Stanley Cup clinching fortuitous goal off your backside?

There are two types of people in that situation — the kind of person who is miserable because that guy was on your team and was traded for someone that didn’t really do much in the Final, or you’re the kind of person who just for a moment felt joy because you know how hard that person worked to reach their goal.

Fuck that second person. That second person is every shmuck on The Price Is Right who gets left behind on contestant’s row or loses a showcase showdown and cheers when the other person wins. Where do these people exist? That dude to your left bid $901 after you bid $900 and the price was $925! You should slug that guy in the face! Why are you hugging him? It’s even worse when they lose out on a car and two vacations at the end. Stop high-fiving that grandma who won both showcases! She’s your enemy and she vanquished you!

On a related note, I don’t play any team sports.

I love Karlsson as much as the next guy, but you can't be giving Conn Smythe votes to a non-finalist, right?

On the contrary, I think Erik Karlsson deserved more Conn Smythe votes. Let’s look at how the voting went:

Voting totals for the Conn Smythe Trophy as voted on by members of @ThePHWA: pic.twitter.com/klT8D0hE1Q

If we ignore the fact that Evgeni Malkin should have won, there are two players (Crosby, Guentzel) who were invisible for a round or a round’s worth of games, one player (Murray) who literally did not play for more than half the playoffs and two other players (Kessel, Subban) who were very good for most of the playoffs, but not quite great.

Side note: Not one god damn vote for Pekka Rinne? He was bad in the Final, but he was a monster for three rounds and he doesn’t get even a third-place vote? If you want evidence that Conn Smythe voters either overvalue the final round or don’t pay attention until the final round, here you go.

Anyway, Karlsson did as much heavy lifting with a bad team as any non-goaltender maybe in league history. The Senators suuuuuuuuucked and they were a goal away from facing a Ryan Johansen-less Predators team in a winnable Final. I contend that if the Sens beat the Pens in Game 7, Karlsson had the Conn Smythe locked no matter who won the Final.

So for him to only get one vote is a crime.

How about the fact that this could have been Jarome Iginla’s last season? He’s a first-ballot Hall of Famer with 600 goals and it feels like nobody noticed (which is a thing that happens when you spend most of the season with the Avalanche). The addition of a 31st team and his strong showing with the Kings probably means he gets another contract, but it’s no sure thing.

He better get the retirement tour treatment when he stops in every city.

Why don't refs use mics/earpiece to talk on ice like soccer refs. 1 of 4 likely to lose sight of puck on any shot. 'Loose, loose, covered'

This is smart, simple and would solve a lot of the problems that come with referees losing sight of pucks.

Look for the NHL to implement it some time around 2046.