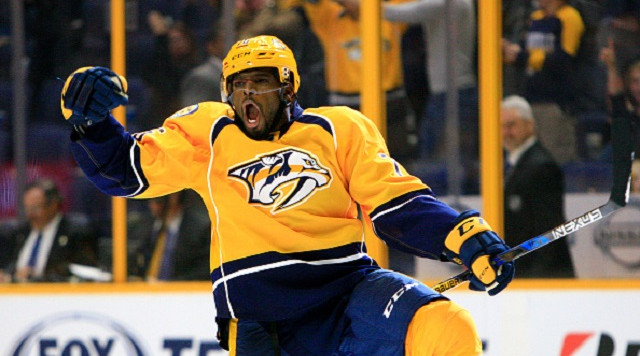 What is the truth behind the Bad Breath Controversy involving P.K. Subban and Sidney Crosby? Was The Leftovers the most hate-watchable show of all-time? Are Penguins fans out of their minds? And who makes the worst trade after the Final and before the draft?

can we get a PK SUBBAN BREATH TRUTHER segment, dave?

Subban gets in Crosby’s face after Game 3. Everyone sees it. Pierre McGuire asks about it. Subban, looking for a humorous answer that can be said on live national television, goes with the playful joke of, “He said I have bad breath.” It’s safe, funny and makes Subban the object of the joke. Considering he was asked this and needed an answer on the spot, it’s not bad.

Of course, Crosby did not say this. When Subban got in his grill, he probably said something along the lines of, “Fuck off.” You can’t say that on television (unless you’re Peter Laviolette firing up the boys in the locker room) so you get a stinky breath joke.

But once everyone started asking Subban about it after the game, he just went with it. Did he foresee this being a thing that would lead to Crosby having to answer questions about it during his off-day? I don’t know. I think that’s a bit much, turning a corny breath joke into something that raises Subban to an Andy Kauffman level of performative comedy. He was just having fun with the joke in the moment and it gave the media something to do between games that wasn’t breathless (get it?), constant updates about Nick Bonino’s feet.

Bar bathroom layout: toilet, urinal, no divider, no lock on the door. What's the etiquette here?

The door must stay unlocked at all times. It’s a bar bathroom, so no one is taking a shit in there and it’s designed for two tinkles at once. So if you’re in there alone, you can’t lock the door behind you. It’s rude and selfish to the person outside that needs to pee.

And if you have to shit, just go home. Night’s over. You should’ve budgeted your meals and poops better if you knew you were going out that night. Besides, you’re never getting your ass as clean as it needs to be to return to a social setting. No one has ever taken a bar shit, wiped with one-ply and gotten their ass better than 88 percent clean.

If you have to take a dump in a bar bathroom, a lock on the door is the least of your problems.

3. The Song Remains The Same

Why doesn't Vancouver use "Nuck If You Buck" as their goal music? Which team has the most annoying goal music?

Some teams just aren’t all that creative with their goal songs. Why don’t the Hurricanes use Shaggy’s “Oh Carolina” after goals? The Predators mix up their songs but don’t use Coldplay’s “Yellow” for some reason. (That reason is the team is gold, not yellow, Preds fan nerds will scream at you).

I’m serious about most of these.

4. A Thin Line Between Love And Hate

Why did you force yourself to watch all 3 seasons of the Leftovers, considering you absolutely hated it? #concerned

There’s something wonderful about a show that’s the perfect kind of bad for hate-watching. The Newsroom was very close to being this show, then it became so bad that it wasn’t worth watching in order to hate-watch. Boardwalk Empire became very bad after they killed off that blond guy, but since the show was good before they got rid of the one interesting character, it was beyond hate-watchable.

The keys to a good hate-watch is having the show start off with a good premise, then devolve as far from the original idea as possible, have it lack any self-awareness and it really helps if the people that like the obviously bad show talk about it in such a glowing fashion that you’d think they were watching an entirely different show from the one you are hate-watching. You can’t have more than three seasons too, otherwise it’s too much.

In this regard, The Leftovers checked every box. Five-star hate-watch.

There are people today debating if Nora’s monologue at the end of the finale was a lie or not. My response to this notion is, “Who fucking cares?” It wasn’t until the 30-minute mark of the finale did I realize the writers of this show wanted me pulling for Nora and Kevin to get together at the end the whole time, which, what? When did this show about how real people would react to The Rapture turn into the most boring love story between two unlikable humans since Ross and Rachel on Friends?

That’s what made it the greatest hate-watch in history. There will never another show that achieves his level of perfect awfulness.

You're an nhl coach with home ice advantage and you get to pick which 4 games you play at home, which games do you choose?

I like the old-school NBA Finals 2-3-2 setup. It’s so unfair for the team that has to play the three games in the middle that I’d force my opponent to win the series that way. You earn a split on the road and then you have to win three straight at home to close the series on your own floor? It’s absurd that was ever a thing.

The only other setup I’d consider is 1-3-3 but if you lose the series opener at home, you’re in real trouble if you go home down 3-1 in the series. I’d have to have real confidence in taking the first game, because then that series is over. But 2-3-2 is the answer.

Is Chris Kunitz a potential hall of famer? If Pens win, 4 cups/1 gold medal, 500 points in league? Plus best buds with Sid.

I can’t tell the intentionally funny questions by Penguins fans from the serious ones that are bad.

Would you have gone back to Fleury after Sunday's game? Or stick with Murray?

NHL has endless things they can improve on. Pick one that would make the game more enjoyable for everyone.

Four-on-four at even strength. The NHL would become the third-most popular sport in America within five years.

most embarrassing clothing item you a) ever wore and b) still wear. Umbro shorts and I still own a hypercolor shirt

It’s not my cargo shorts, that’s for sure.

Which GM not known as GMGM makes the dumbest pre-Expansion Draft Trade?

I’ll put $20 on Bruins GM Don Sweeney. I remain unconvinced he knows what he’s doing and he puts a premium on toughness. That’s an excellent combination for doing something dumb with the 18th pick. Or Sweeney will package a bad contract with someone like Ryan Spooner to create some cap space and because he’s too soft or some dumb Boston shit.

Some people have forgotten Sweeney isn’t good at his job and maybe we will be reminded in the two weeks after the Stanley Cup Final ends.